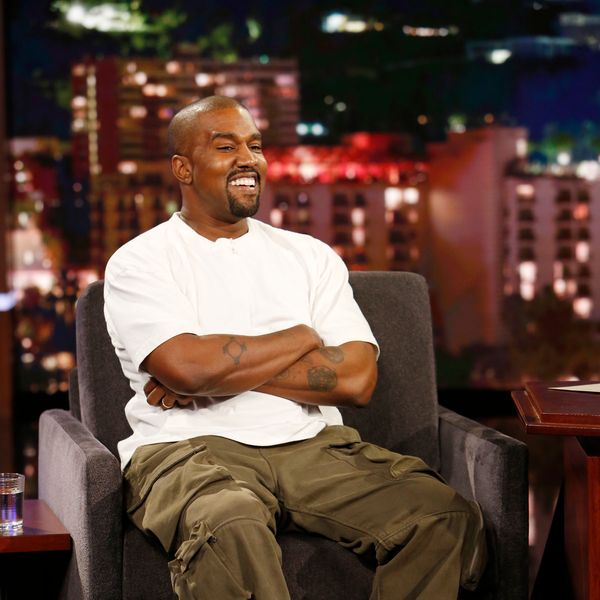 After performing on Saturday Night Live this weekend, Kanye West delivered a tendentious, ahistorical pro-Trump lecture (he even wore a MAGA hat). The rant, which Chris Rock posted video of to his Instagram stories, was met with boos, jeers and silence from the audience, while SNL cast members stood awkwardly onstage behind him. Trump was into it! We live in a waking nightmare.

Lana Del Rey's response to one of West's pro-MAGA Instagrams has already gone viral. "Trump becoming our president was a loss for the country," she wrote to Ye under his MAGA-adorned selfie. "But your support for him is a loss for the culture." You may recall that Del Rey performed at Kimye's 2014 wedding. The drama!

Several other celebrities, including Chris Evans, Questlove, Snoop Dogg, Swizz Beatz, Macy Gray, and Alec Baldwin (who loves to throw stones in glass houses), have also responded to West. They, unlike the president himself, are not exactly pleased with the rapper's takes on Trump, the American economy, and abolishing the 13th amendment (he's referring to the parts that enable the prison system. But still).

1- Dear Kanye, Your support of Trump is certainly your right. And the expression of any political ideas and suppo… https://t.co/shuQbnK82O
— HABFoundation (@HABFoundation)1538402418.0

3- Wealth and celebrity are never signs of character. They are signs of luck, in some cases hard work, and the od… https://t.co/SMtPX8hvI0
— HABFoundation (@HABFoundation)1538403967.0

4- Although I have certainly failed to fulfill my own end of what I deem the “Artists’ Pact”, I nonetheless maint… https://t.co/aCR6fVocQY
— HABFoundation (@HABFoundation)1538409162.0

5- In an often ugly world, filled w bargaining away our own best interests, we owe them that dedication. They rel… https://t.co/nUMF65Ol2D
— HABFoundation (@HABFoundation)1538409407.0

So, do you still want to hear Yandhi?