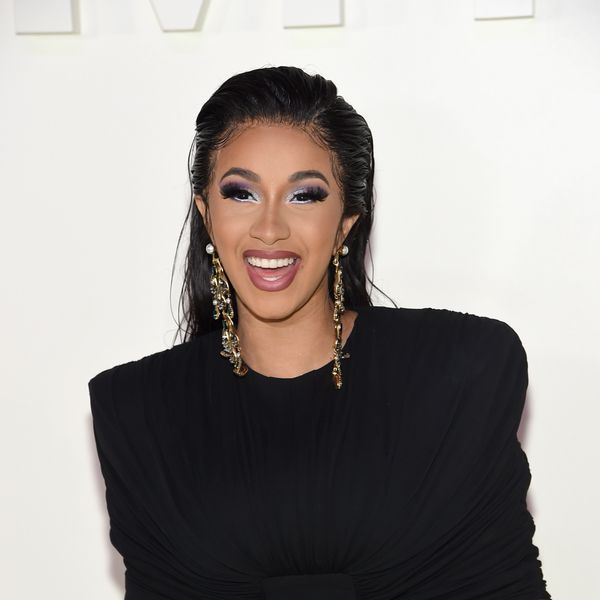 Cardi B has become a welcome, lucid celebrity voice on politics.

She chimes in when she has something to say, she skips the naive pearl-clutch condemnations, and like all her music, her contributions are honest and poignant. Remember when she threatened to dog walk Tomi Lahren, schooled a conservative pundit about twerking, helped end the government shutdown? Her political awakening, played out in public, has mimicked much of the culture at large, and when she speaks on politics, she's often voicing mass frustrations and concerns.

Related | Cardi B Goes Off on the Government Shutdown

So, it's timely that, just as it seemed everyone had forgotten about the most progressive candidate on the debate stage, Cardi B is doubling down on her support for Bernie Sanders. You love to see it!

"I been reading about Bernie Sanders and I'm really sad how we let him down in 2016," Cardi tweeted this morning, continuing: "This man been fighting for equal rights, HUMAN rights for such along time. Seeing this country become a better place been really his passion for a long time not a new front for a campaign."

Cardi's become more vocal over the last year or so, but she's long been a progressive. While most pop girls were lining up behind Hillary in 2016, Cardi supported Bernie. She told her fans on Instagram in 2016, "Vote for Daddy Bernie, bitch!" via The Hill. When she and Nicki were facing off in a political proxy war, she was team Cynthia Nixon, while Nicki supported establishment dem Andrew Cuomo.

Related | Cardi B Cancels the Press

However, this is the strongest indication so far that she'll support Bernie in the 2020 primary. She gave mixed messages when asked by Variety on a red carpet in April about the primary. While she said, "Imma always be with Bernie... Bernie don't say things to be cool. There's pictures of him being an activist from a very, very, very long time," she indicated her mind wasn't made up yet, citing support for Ohio congressman Tim Ryan.

Bernie, surely thrilled to have locked down his first major endorsement aside from longtime Bernie stan Killer Mike, didn't waste time thanking Cardi for her support.

It's the second time the pair have interacted online — he thanked her last year for bringing attention to the importance of Social Security in a GQ profile. Now, it's only a matter of time till Cardi hits the campaign trail with Bernie, and he's walking out at rallies to "Bodak Yellow." He can definitely find a way to repurpose lyrics like "I be in and out them banks so much/ I know they're tired of me/ Honestly, don't give a fuck/ 'Bout who ain't fond of me" into his messaging.