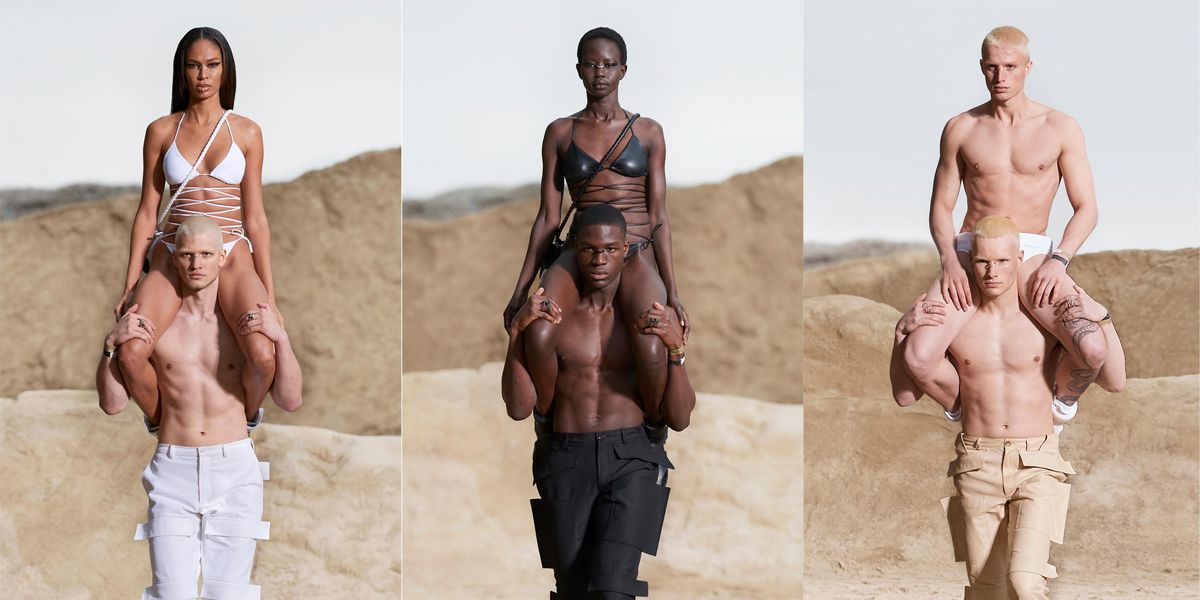 Riccardo Tisci took Burberry out into a sand-filled high fashion trance for his latest menswear outing. Titled "Universal Passport," the collection combined deconstructed silhouettes, a thumping soundtrack and an unexpected trio of piggyback rides — but make it fashion, of course.

Coming off of the brand's Fall 2021 show — which featured an angelic cameo from British electronic artist Shygirl — Tisci continued his exploration of sound, set design and a reinterpretation of house codes for the pragmatic menswear collection. Curated by British music group Shpongle, the atmospheric soundtrack provided the perfect backing for the utilitarian and fluid energy that Tisci's ready-to-wear exuded.

Sleeveless silhouettes, asymmetrical tunics and graphic motifs played with traditional Burberry codes while maintaining Tisci's unique overhaul of the British brand. The trio of models on piggyback rides — or were they preparing for a chicken fight? — were an unexpected addition, too. Did the models say they would walk for half the price, like High Fashion Talk joked on Instagram? Or perhaps the trio are off to the beach? Or a rave?

Whatever the case may be, the series of piggybacks reflect Tisci's experimental vision for Burberry that is not only embedded into the ready-to-wear, but is also featured throughout the set, atmosphere and model mannerisms. Closing out the piggyback rides was supermodel Joan Smalls in a strappy white bikini completed with a coordinating crossbody messenger bag — the nonchalant vibe we are all channeling this summer.

Below, the full video from Burberry Spring 2022 Menswear.