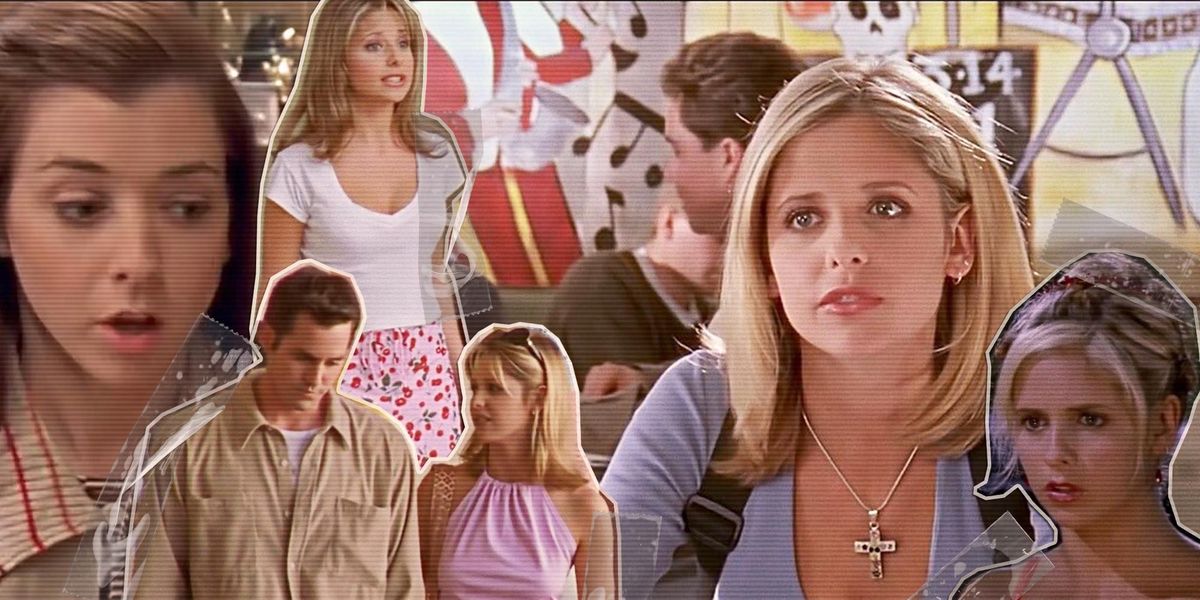 Much has been written about Buffy the Vampire Slayer in the 24 years since it debuted on the now-defunct WB network, home then to Sister, Sister and The Jamie Foxx Show. The feminism, the impact, the academia, the legacy, the bands, the hair and, of course, the possible reboot. But few have called attention to the work of costume designer Cynthia Bergstrom, who helped establish a number of trends that have since cycled in and out and back in again. Case in point:

Buffy's wardrobe department had the unique task of having to balance the California cool kid look with the conceit that Sunnydale, California was meant to embody Everytown, USA. In a similar contrast, the character of Buffy was social outcast by day, badass heroine by night. Luckily, Bergstrom's familiarity with the source material gave her a leg up. "I had just completed the first Scream movie," she recalls of the day she got the call to come on board Buffy the Vampire Slayer. She was a fan (one of the few) of the 1992 film that the series was based on and had been drawn into the first season of the show by the dialogue. "And I knew," she recalls, "I just intuitively knew that I was going to be costume designing the show."

It's a unique experience to be able to watch a project in its early iterations before coming on board, but especially in the case of Buffy, which was a mid-season replacement (and thus only 12 episodes instead of the regular 22) and shot its entire first season before the first episode aired. As a result, there was no room for critical or fan feedback.

Related | 'Supermarket Sweep' Is This Summer's Most Stylish Show

The show's initial costume designer, Susanna Puisto, was let go for reasons unknown when Bergstrom was officially hired to take the reins. "I think they just wanted fresh eyes and I do remember [the producers] sharing that they wanted less of a vintage look and wanted everything to look a little bit more hip and a little bit more cool," Bergstrom recalls. Buffy had quite literally been reborn and resurrected in the season one finale and was now taking ownership of her status as the chosen one. So her style needed to reflect this and be, as Bergstrom puts it, "less little girl-ish."

Bergstrom officially joined the show for the premiere of season two and stuck around for five seasons, leaving a year before the series concluded in its seventh season. "I was stretched as a costume designer — and it was fabulous," she says of her work on 110 episodes of the series, which took Buffy from junior year of high school into adulthood — with a brief stint as a fast food worker along the way.

Sarah Michelle Gellar, 20 years old at the time of filming, had strong opinions about how her character would dress. And Bergstrom was happy to hear them. "It was totally collaborative," she says. "We had very lengthy discussions and she was very specific and knew exactly what worked for her body and what didn't. She gave me brands that she really likes and perimeters and in turn I would introduce her to new brands."

Bergstrom didn't shy away from high-end looks, outfitting Gellar in Dries van Noten, Marni, Haider Ackermann, Alberta Ferretti and Maison Margiela throughout her tenure as well as featuring emerging designers and brands of the time like Tracy Reese, James Perse and Serfontaine Jeans.

Bergstrom also stretched her skills as a designer. Take the show's season three homecoming dresses — a bright, poppy red faille gown for Buffy that was inspired by an Issac Mizrahi design Gellar had in mind, and and emerald green silk satin for Cordelia (Charisma Carpenter) inspired by Rita Hayworth in Gilda.

Why design a look versus pull one? "I wanted control," Bergstrom says. "That was the beautiful thing about this show: I was able to shop and build so many of the costumes. It was disappointing getting to my next series where I was like 'Whoa, this is a show that you shop,' because Buffy really afforded me the ability to design."

Despite her love for the show and her work on it, Bergstrom left Buffy after its sixth season, feeling creatively drained by the darkness it was exploring thematically. Notably, the season featured a main character's death by gunshot wound, a loss that contained no paranormal element, as had been the series norm up until then. "There was a part of me that wished I had stayed on Buffy and finished it out, I'll be honest," she says. "And then as I started to watch the season… I just felt like season seven was all over the place. I didn't get it." I can't say I disagree.

Below, Bergstrom revisits and reflects on a number of the show's most iconic looks.

"Love the giraffe print pants. I loved how the way this outfit fit Sarah — she wore clothes well. I do recall something about her dark bra showing underneath her cream blouse. This was intentional to signal that she is revealing more of who she really is. Funny story: the heads of the network called me into their office one day. They didn't tell me why they wanted to talk to me. I was a bit nervous, but mostly excited. When I arrived they told me that they loved how I was dressing Buffy. They then mentioned something about her bra straps. I thought they were going to ask me to not show her bras, her straps, or anything else. Thought that perhaps I was going to receive a little scolding. Instead, they shared with me how they had heard that there was a beer drinking game amongst those of age to drink, that every time Buffy's bra strap showed one had to drink. I burst out laughing. They asked me to keep showing her bra strap."

"This is probably one of my favorite outfits. I love how this shot was used in slow-mo for the opening credits. The coat was Cynthia Rowley; the pants were Mark Wong Nark (I don't think this brand is around anymore). The color of the coat was beautiful on Sarah."

"Shades of varying blues just worked so great on Sarah. I love the youthful elegance of the coat. It pairs perfectly with the dress."

"That beautiful Vera Wang wedding dress went up flames! Actually, I had my team make a couple of copies for the pyrotechnics. It was a lovely dress, perfectly big and poofy."

"The prom dress! It was from the designer Pamela Dennis. I recall that the dress needed constant attention so as to avoid wardrobe malfunctions."

"Buffy against Faith… Buffy was just badass! Her outfit had to be super badass and it was. I'd love dressing her this way. She was still feminine and beautiful in all her badassery. Buffy was truly the first superheroine."

"Sarah loved sushi. When I saw these pajamas I just had to have them for her. It was a thing I liked to do… give her super cute and fun PJs."

"I shopped at some of the coolest stores in Los Angeles for the Scooby Gang's wardrobe. I remember finding this T-shirt and just loving it for Buffy. It was cute and a little bit naughty. I received some fan mail about my intention for this tee...some thought I was trying to send some sort of subliminal message or conspiracy. I assure you, I was not. [Laughs]"

"Once More, With Feeling" was perhaps the most fun episode to design. My favorite outfits were the pajamas that Anya and Xander wore during their song & dance number. I always saw Anya's character as a throwback to the movie stars of the '30s and '40s, so I was excited to design her tap pants and camisole. I designed Xander's PJs around her outfit. Still to this day, I love watching that scene. Well, I love the whole episode. Funny story — well, sort of funny. Sweet (Hinton Battle) wore these two zoot suits that I designed. One was red and one was blue. Each night they were sent out the cleaners and to protect the buttons on the suit jackets, the cleaners covered them in aluminum foil. Usually a costumer will remove the foil as they are prepping the costume, however, in one scene you can see the still foil covered buttons! I'm laughing now, but way back then I was less than happy."