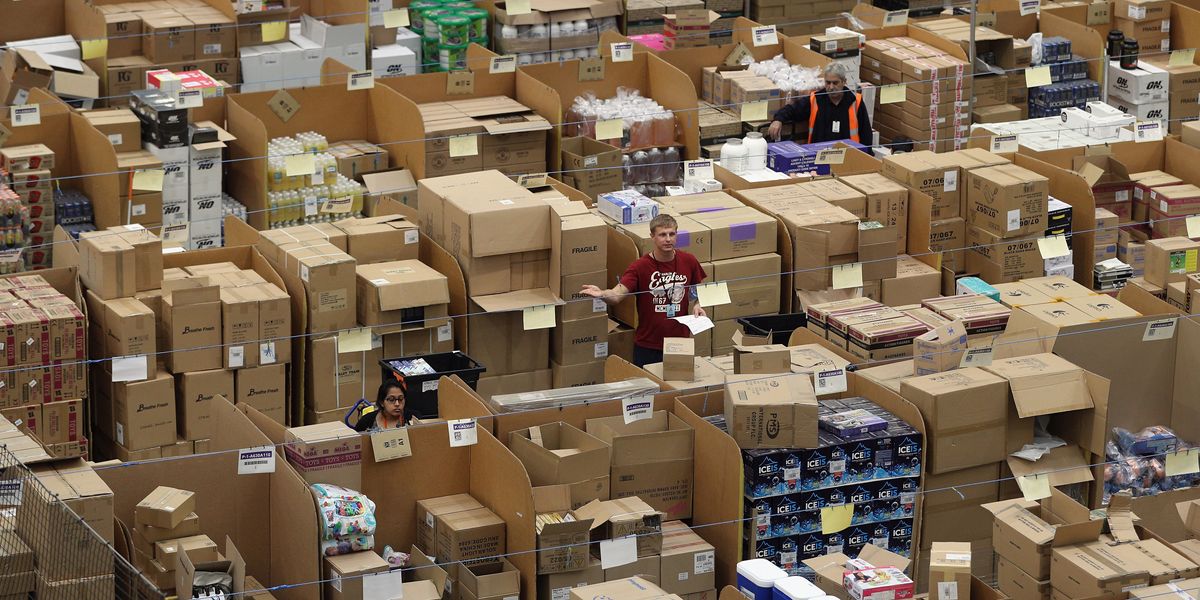 Why Activists Want You to Boycott Amazon Today

Today, the spending masses will head to Amazon dot com to find unethically great deals on everything from eyebrow pens to portable water filters. The occasion is the fifth annual Amazon Prime Day, a window of mouth-watering deals available exclusively to Amazon Prime members. Last year's Prime Day was Amazon's biggest day of sales in history, according to CNBC. This year, the mega-retailer is hoping to beat their own record this year, expanding the holiday from 36 hours, to 48, over the course of July 15 and 16.

The absurd coin Amazon annually pockets on the self-declared holiday is the reason that, for the second year in the row, warehouse workers are using it to get their employer's attention. Today, as the orders flood in, fulfillment center workers in Minnesota and Germany are staging a six-hour work stoppage to demand Amazon end exploitative labor practices, Bloomberg reports. Many of their colleagues on the tech side are supporting the strike, and some, belonging to the Amazon Employees for Climate Justice group, plan to travel Minnesota to stand with the workers.

"Amazon is going to be telling one story about itself, which is they can ship a Kindle to your house in one day, isn't that wonderful," said William Stolz, one of the Minnesota employees organizing the strike, told the outlet. "We want to take the opportunity to talk about what it takes to make that work happen and put pressure on Amazon to protect us and provide safe, reliable jobs."

The strike will only affect a few Amazon warehouses, but it promises to be critical given how much Amazon stands to lose on their big day. This is where consumers come in. They (we) have the power to amplify workers' message by sitting out of today and tomorrow's shopping frenzy.

Activists and unions are calling on shoppers not to cross the digital picket line, in solidarity with workers. If you wouldn't cross a line of strikers outside a store, then you should stay off Amazon today and tomorrow — as well avoid streaming Prime TV shows or visiting Whole Foods (owned by Amazon) or Kohls (a recently announced affiliate).

The strike is ultimately about workers proving to Amazon that they are the only reason Prime Day is possible, and as The Verge points out — workers themselves aren't specifically the ones asking shoppers to boycott Amazon. However, the strike has become a focal point for an entire choreography of pro-labor actions taking place around the world, and however small, the boycott is a small way available to all of us to make all those actions ring louder.

One more direct way you can support the workers' organizing efforts is by throwing a few bucks you might've spent on discount vitamins or socks to the Awood Center, a Minnesota East African community center that's supporting striking workers, a large portion of whom are East African.

Related | How To Help Sudan: A Country in Crisis

The boycott is likely to pick up traction, given that consumers have become increasingly and uncomfortably aware in recent months of the fact that Amazon Prime's whiplash shipping and absurdly low prices are only made possible by fairly untenable conditions for the warehouse workers. This year's strike was partly prompted by Amazon's recent announcement that it would begin providing free, one-day shipping. Workers across the country have launched a push for unionization, citing punishingly long hours, few bathroom breaks, and draconian disciplinary action. Reports recently detailed how competition with Amazon has created an efficiency arms race, resulting in preventable deaths, injuries, and miscarriages on the job.

The strike also coincides with an NYC protest today at the Amazon Web Services summit, where demonstrators are demanding the company cut ties with ICE and the Department of Homeland Security. According to The Guardian, Amazon hosts databases that allow the government agencies to track undocumented people, and is even in talks to launch "biometric databases" storing "extensive data, including eye color, tattoos and other identifiers."

All of these facts make today and tomorrow great days to consider just how much convenience is worth to us. And to shop at Target.