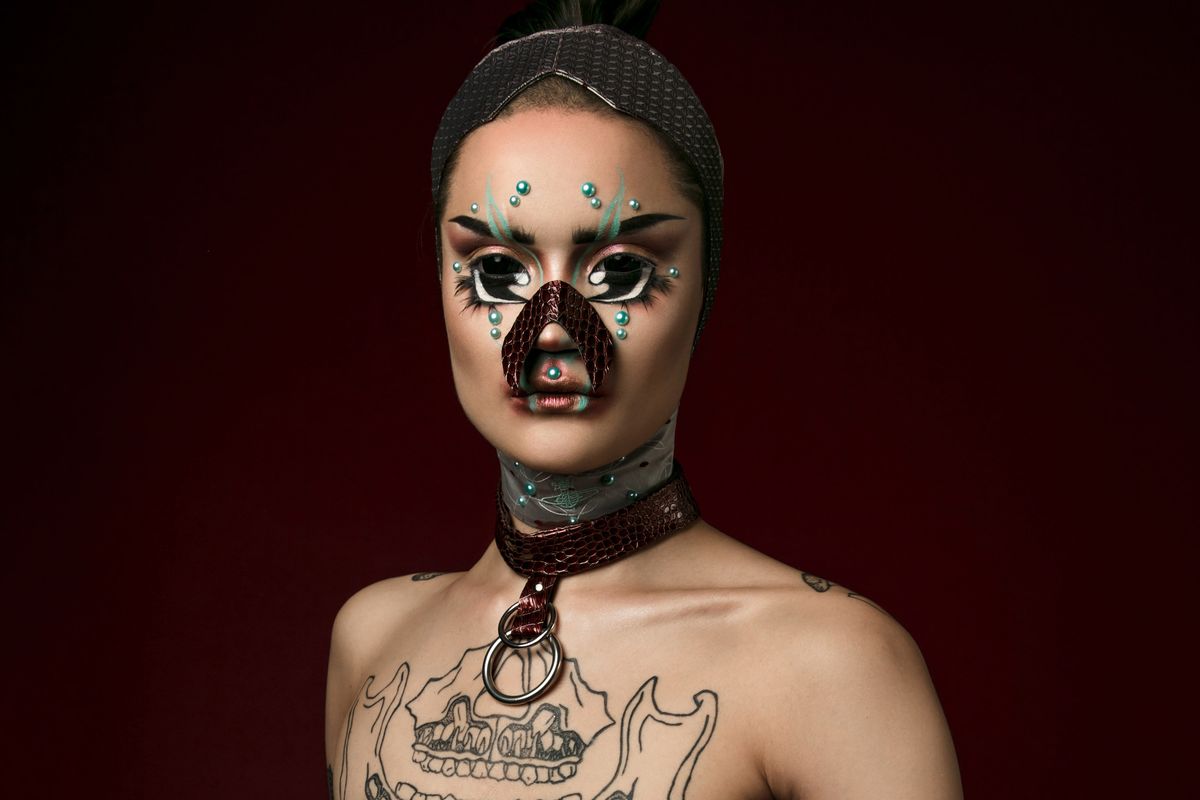 The art for Björk's Utopia features the singer with a silicone vagina on her forehead courtesy of James Merry, and iconic alienesque makeup from Berlin-based drag queen Hungry. It's a stunning collaboration, and one that sees Hungry recreating her signature surreal look on Björk's face — the dramatic under-eye, the colorful otherworldly contouring, the pearl embellishments.

Since first starting in the Euro drag scene 4 years ago, Hungry has well-established herself as both a powerful queer performer and bonafide artist. Now with 216k dedicated Instagram followers, she's created a look that's entirely her own, using the naked face as a blank slate to develop "distorted drag" looks that are batshit beautiful and seemingly pulled from another planet.

PAPER caught up with the coolest person on your feed to learn more about their background, Björk, and drag on a global scale.

Where are you from originally?

I was brought up in a small town in Bavaria, then left for Berlin right after school to get my degree in fashion design, which I finally did last year. I always loved making things with my hands; draw, paint, sew, craft and construct. My studies in fashion design then led to me making more and more obscure looks, which I thought I should put to use. What led me into drag, though, was just my circle of friends. It started out as curiosity and then very slowly became a passion and then even a career.

How long did it take for you to get heavily involved in drag?

My best friends dragged me up and took me to a big drag night in Berlin and I enjoyed that very specific kind of attention. It then took another six months for me to dig out the wig again, as I had enjoyed it the first time, yet didn't feel like it was very personal for me yet. That then took another year, until I had found a more fitting kind of drag, that I also felt comfortable in, on the train or outside of safe spaces.

How do you think your makeup has evolved?

It all started out as very natural beauty makeup, because I, admittedly, have a very easy face for makeup. It was all about the illusion of being somewhat passing. I then got more into the visual aspect of the art form — the paint, the exaggeration. I mixed drag makeup with the androgynous outfits I had made for school and some fabulous looks friends from school gave me. It became more and more artistic. I started to focus my creativity on drag.

When I moved to London to intern at Aitor Throup and Vivienne Westwood, the most severe change happened. I realized that London had so many gorgeous queens — that I didn't need to deliver beauty anymore, so I started dissecting my face, and analyzing the possibilities and the space I had for makeup and experimentation. [I treated] it like a sewing pattern and finding ways to make it more technical and, for me, more relatable.

Describe your look then.

For about a year, I had one continuous line cutting through my face, framing my bone structure and separating my face. Sometimes I had it blended out, like a scar, [and] at other times it was glitter or pearls. That line then became several panels, turned into different shapes and I added more colors and pearls throughout. I didn't paint eyebrows at that time, just had a rhomb shaped eyeliner and a crease cutting upwards, onto my forehead, like it still does. I loved wearing sclera lenses, because they always made it seem like I had my eyes shut and it was just all-black liner.

How did you the under eye makeup happen?

Back in Berlin my under eye illusions happened. One day, Chloe Waldorf and I were invited to Fashion Week and weren't too thrilled about the idea of heavy daytime drag, so I thought, why not keep my eyebrows, move my liner underneath my eyes and make it seem like my eyes dropped. This single idea of cutting down on brow cover then basically opened my under eyes to further possibilities. I played with shapes and negative space, trying to fill my face with panels of color and glitter. Over time, [I] dissected my own new aesthetic again to have it go more natural or louder when I felt it was needed.

Who or what inspires the work you do?

The aesthetic I created and am now known for definitely just developed over time and derived from every step along the way. Therefore the big picture itself doesn't have an immediate inspiration, but I personally was always fascinated by anatomy, biological structures and religious figures.

How have you seen drag evolve since you first began getting into looks?

Apart from more and more people looking like me, drag just exploded in popularity. I myself am still very new to it, considering that I've only been doing it for 4 years now, and I keep seeing so many refreshing, fascinating new aspects and interpretations of drag in my travels.

How would you like to see the community change?

I wouldn't want it to change much. It's definitely heading the right way by including more and more definitions of people. People who had followed me for a while will know that I had a few moments of weakness, when it came to people taking designs of mine without crediting me, but I made peace with the fact that there is no way of stopping that anymore. Any avant-garde artist will have to deal with that sooner or later, and I know many who have dealt with it way longer than I had to.

How did you begin working with Björk?

James Merry, the artist behind Björk's stunning handcrafted masks and now silicone pieces, approached me over Instagram. It pretty much came out of the blue, but he must have noticed me and apparently she then saw one of my makeup [looks] and really felt it fit the concept of Utopia.

How was it working with her?

It's a beautiful environment to be working in. I didn't know what to expect. I hadn't done many big productions or video shoots before. I think I only had painted one person in a "Hungry" face before her, so everything was a first. But I knew my skill-set and I knew I could handle most anything they might throw my way. Afterwards I was extremely relieved to find it to be such an inspiring and comfortable work space, and with every shoot I felt our vision align more and more.

What was Björk looking to achieve through Utopia?

My part in Utopia was just creating one of the characters she had envisioned for part of the album — a very pure, raw creature, found on an island, untouched, unspoiled by anything. Björk saw all that in a concept of mine, so all there was to do was to adapt that to her, as well as James' specific ideas of it. We found a different way into it every time, which was very interesting.

What's the story behind your name, and how does it connect to your drag persona?

Hungry birthed out of a witty joke, which I think is very obvious. It was at a time when I was very busy with school projects and projects of my own, and I, still to this day, tend to forget food when I'm very invested in my work. So at the end of the day, there is usually this moment of realizing that I didn't eat all day, and I just made that my name. I'm very happy with it, because it is so open to interpretations. Hungry for what? Love? Recognition? Warmth? Wealth? Who knows.

As someone who's brought their drag across the globe, what is different about the scene you grew up in?

As I can only count the past four years as growing up in the scene, I don't have much history to compare it to, but Berlin's drag scene is still a very fresh one, which is brilliant, as it's shaping very alternative, modern kinds of drag performances. There's differences in every country or even city I go to, just depending on the overruling issues or interests of the area. Quite frankly, I'm hoping for every scene to keep their originality, because I'd be really sad if every drag show merged into the same block.

Do you think drag can be political?

Drag is a megaphone. It's not only a voice, it's an echo that will get you heard, no matter what your message is. That said, it's to be used with care and thought.

Where do you want your drag to take you?

Memories. History. I'd like it to be the mark I'm leaving. There's many ravenous people out there telling me that everything has been done before and there can't be anything truly new. I wouldn't want this ill will and bitterness to win over everything I've worked on creating.