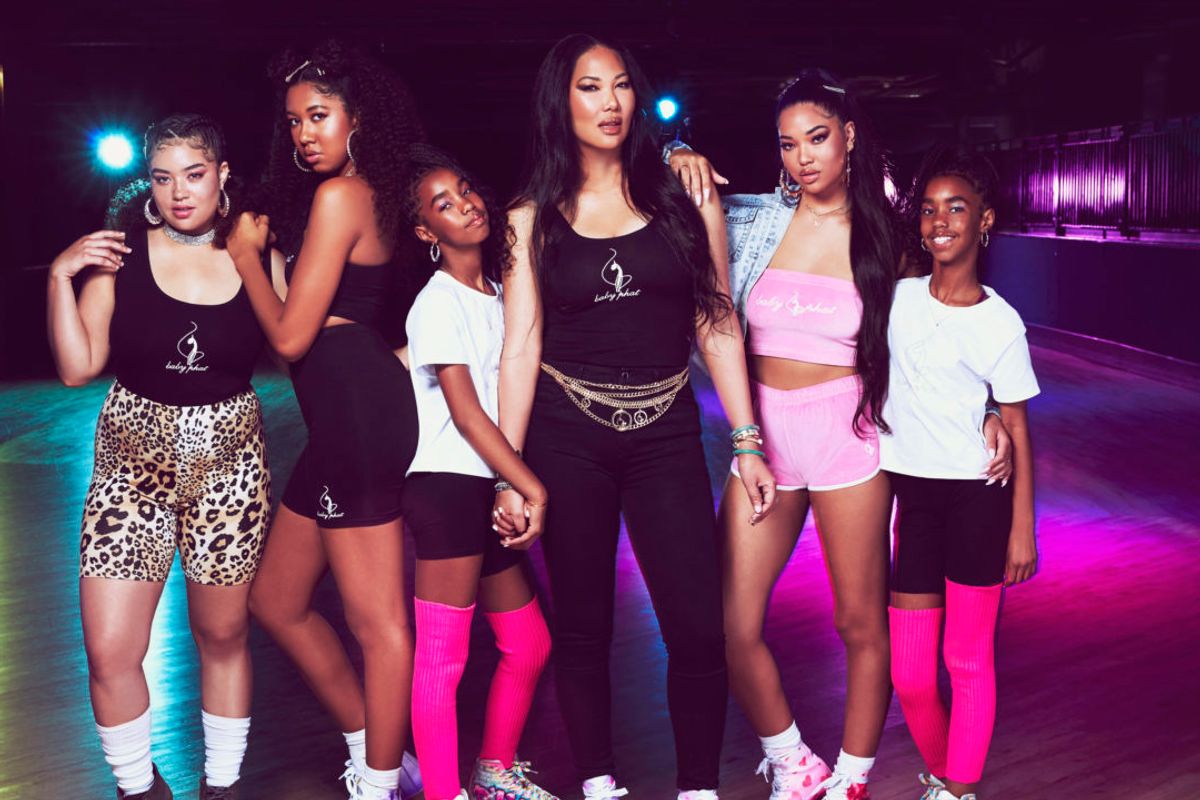 Why Baby Phat’s Resurgence Is Monumental

Plush velour suits, low rise denim and monogram bubble coats with the infamous cat insignia made Baby Phat a wardrobe staple in its prime. Launched in 1999 by the fabulous Kimora Lee Simmons, under then-husband Russell Simmons' Phat Fashions LLC label, the lifestyle brand delighted in the kind of luxurious takes on streetwear now seen on major runways around the world. Hip-hop's adoration for monograms, opulence and excess were key formulaic elements that made Baby Phat thrive in the early-2000s.

Kimora at the 2003 Baby Phat runway show during NYFW

After teasing Baby Phat's relaunch earlier this year on International Women's Day, Kimora Lee (born Perkins, now Leissner) lived up to her promise and delivered a surprise collaboration with retail giant Forever 21. The affordable, 18-piece collection inspired by the legendary lifestyle brand notably features an inclusive size range that goes up to 4X.

The relaunch's colorful campaign features Simmons and her daughters, Ming Lee and Aoki Lee, alongside Diddy and the late Kim Porter's twins D'Lila and Jessie Combs, and serves as Baby Phat's reintroduction to fans who have been waiting patiently for the slinky cat to return and for new consumers interested in joining in on the resurgence of nostalgic brands making a comeback.

During announcement in March — made at the Global Innovation Coalition for Change hosted by the UN — Leissner noted that teaming up with Forever 21 provided an opportunity to connect with a younger demographic. "Our strategy is tied to embracing all the exciting things that have happened in the market so that Ming Lee and Aoki Lee can tell their story to a new generation young women, some of whom may not have even been born during our first go around," she said.

Having already partnered with notable companies including Kodak, Disney and more, Forever 21's VP of Merchandising Linda Chang said, "Baby Phat is always front and center when you think of iconic streetwear brands." Given the cyclical nature of the fashion industry, it's a no brainer to collaborate with the woman who created a look that continues to dominate Instagram grids, whether they know Leissner is behind the inspiration for their moodboards or not.

In 2017, Leissner told Refinery29, "Now, everybody's doing retro with a little high-waisted jean and tube top, or the sneaker and the jean — that's the Baby Phat girl," Leissner said. "That's popular [again], and we were one of the first ones to do it, one of the biggest ones to do it, and one of the greatest ones."

While the present launch is just a preview of what's to come ahead of the full collection in September, Baby Phat's resurgence in 2019 speaks to how Leissner is reclaiming the image she thoughtfully crafted two decades ago, on her own terms.

Known for its over-the-top runway shows — mirroring Leissner's Fabulosity™ brand, echoed on her short lived reality show, Kimora: Life in the Fab Lane — Baby Phat show guest lists featured hip-hop's crème de la crème, including Missy Elliott, Cam'ron, Diddy (then Puff Daddy) and more. Baby Phat was lauded for its iconic runway moments just as much as the sexy, cool apparel — Lil Kim's infamous jaunt down the runway in 2000 donning a sheer bikini and floor-length fur coat comes to mind. Worn by a multitude of celebrities and loved by teens and young women alike who were able to access designer clothes at a generous price point, Baby Phat rivaled companies selling the idea of leisure and luxury and made Leissner a force to be reckoned with. In 2006, Leissner became president of Baby Phat's parent company, making her one of the first Black women to lead a billion dollar company.

Scenes from a 2005 Baby Phat After Party

Leissner found other ways to innovate. She released a signature pink Baby Phat Prepaid Rush Visa Card which offered a 10% discount on online Baby Phat purchases, was the first designer to show at Radio City Music Hall in 2006 and became the first designer to livestream their show via Jumbotron in Times Square in 2009, giving spectators an "in" on a typically exclusive event (and a now-common practice for brands reaching audiences online).

From being stocked in Macy's to selling a custom Motorola i833 mobile phone sold exclusively at Bloomingdale's during its height, Baby Phat arguably helped build the groundwork for women of color who wanted to see themselves on the runway and not just in the fashion industry but multiple industries. (This influence speaks to Rihanna's dominance with umpteen FENTY trademarks).

In an interview with The Fader in 2016, Leisser said, "I built Baby Phat to be a billion dollar brand. There was a time that I had probably 50 licenses that made everything from baby clothes to lunch boxes to color cosmetics, headphones, fragrances, you name it — it was huge." Despite parting with the brand in 2010, Leissner's impact has been embedded in fashion forever. From employing a variety of models who differed from the status quo to overseeing the design process herself, Baby Phat is authentic and true to Leissner's origins.

Baby Phat's influence may have been reduced to an urban title to discredit its impact on the fashion scene, but one thing it thrived on was its ability to connect with young girls and women from minority backgrounds and through that connection remained a major player, pushing styles and trends we continue to see on people of all backgrounds today. With the teaser of the new collection and the full relaunch arriving in September, Baby Phat is back like it never left, and I'm here for Kimora claiming all of her things.