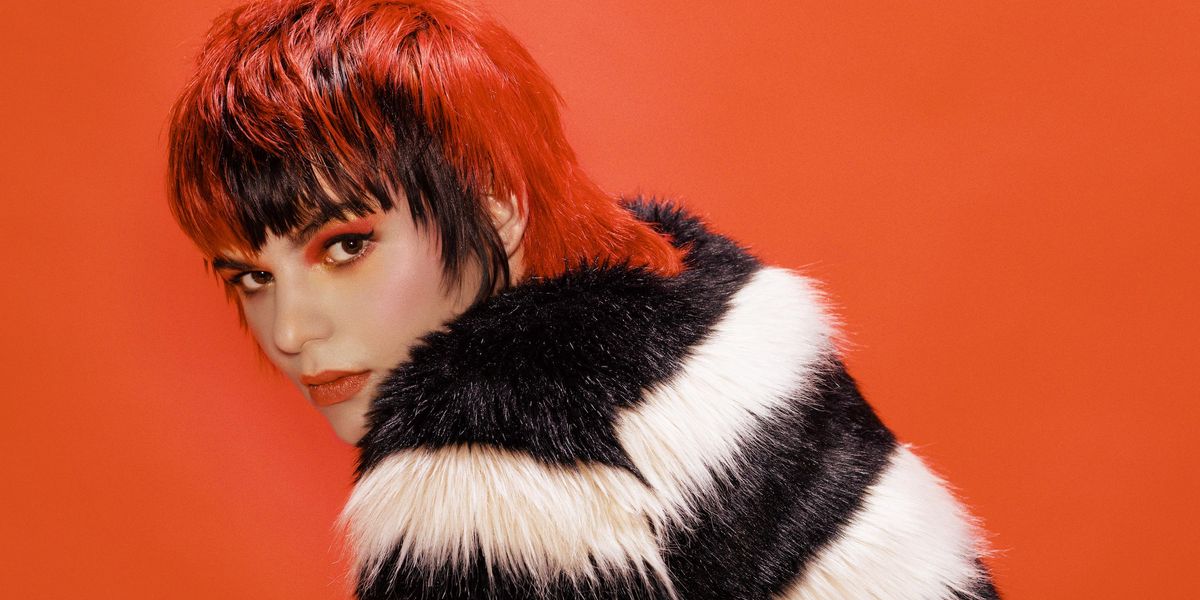 Fresh off the release of her 2021 single, "lovesick," singer-songwriter awfultune (real name Layla Eden) returns today with "SICK OF U" — a relatable, bedroom-pop track that singes the line between love and hate, while capturing the post-breakup lethargy that makes you "just wanna stay in the house and never leave," as she sings on its chorus.

"I've experienced and felt both of these feelings before [in 'lovesick' and 'SICK OF U'], from not being able to get someone out of your head to things turning sour and wanting them out of your life forever," Eden tells PAPER. "I'm a firm believer that you have the right to cut off anyone that's unhealthy for you. You don't need to carry the resentment you feel towards those toxic people in life that keep you around just to toy with your heart."

The 22-year-old's new single calls back to the roots of her original music-making, from a personal laptop in upstate New York. Despite having garnered 100 million global collective streams throughout her career thus far, Eden's latest material still offers that intimate, diary entry appeal, both in its lyrics and sonics. She sings to you like a best friend, unpacking her most personal experiences like you're an ear she trusts.

And her honesty extends well beyond music, too. As an openly transgender woman, Eden is a champion for queer representation through her work. She's shown her following the power of self-discovery as a means to reaching happiness, and has documented her journey online, from coming out to taking hormones and getting facial feminization surgery.

"SICK OF U" is the second piece of a six-part color story that she's rolling out for this new, conceptual project. While "lovesick" represents red, "SICK OF U" arrives with a bright orange hue. In the future, there will also be yellows, greens and more, each embodying a different mood that helped inform Eden's tracks.

Below, listen to the PAPER premiere of awfultune's "SICK OF U" and learn more about a storyteller who, in many ways, seems to be on the cusp of becoming her generation's new, leading voice.

What direction is your new music going in contrast to previous releases like "Lvr Boy" and "I Met Sarah in the Bathroom"?

"I Met Sarah in the Bathroom" is probably the closest to the new sound out of anything. I'm a huge fan of pop music and these days I have been trying to branch out of the "Lvr Boy" sound, which is more acoustic-driven, and still create whatever my heart desires, but in a revamped way. I've slowly distanced myself from sounds that I've explored in the past. Now it's just about having fun with it all, but still growing my music at the same time.

When I first started writing for awfultune, I was a very miserable teenager. Young and vulnerable with stories to tell, and thankfully a platform that developed with eager listeners. Coming out as transgender, growing up to be happy and becoming exactly who I want to be was so healing for me in so many ways, and really reflects in my music.

"Coming out as transgender, growing up to be happy, and becoming exactly who I want to be was so healing for me."

Can you talk more about the color story around your new releases this year?

It's funny, actually. I was inspired last year when I released my fifth album, layla. It was such a playful album, so I ended up wearing rainbow hair, and experimented with a ton of different looks and colors. I felt like every song on my new project should have a color and a mood. It began when I started to notice the bright colors from various aspects of my everyday life. Each individual wall in my house, my collection of colorful wigs, the clothes in my closet, they were a big part in my recent venture into a color story of its own.

In addition to the emotions that surround the lyrics and the color/mood that corresponds, the collection of these new songs really explore the journey I've had myself as a member of the LGBTQ+ community. There are so many emotions we all go through daily and thankfully those are getting to be more positive with the shift culturally, but it is an extensive road for each and every one of us. I want the music to reflect that, as well.

"I had a huge fear that being fully yourself meant that you're leaving an open door for people to criticize you."

Speaking to "SICK OF U," can you expand on the highs and lows of a relationship when you're with someone who is clearly toxic for you?

I feel that it's most important to love yourself first and foremost, but sometimes it's hard to do this when you have people constantly bringing your vibe down. It's so easy to let the negativity play a huge role in your journey, but with experience I've learned to just not give a fuck. I say do you and let the rest unfold.

What has it been like to grow up, as a teenager and now a young adult, all online in front of so many people?

The reality of it is pretty scary. I went from being a normal kid to a public figure online nearly overnight. I talk a little bit about this in my song, "bandaids, bruises, and bullshit." It's very strange to have your whole life be inside of a screen with millions watching your every move. At first, I didn't know how to handle it. I think what makes it easier for me now is the music overall. I have a time capsule of my teenage years and fuck ups, and that's okay. It's all out there for everyone to see and sit with. Now I'm 22 and think it's cool that I've grown in front of a bunch of people. I'd rather them learn from music they resonate with and feel inspired than anything else.

"My biggest success is helping people as I discover myself."

You've been very open online with sharing your journey transitioning, like in your "Facial Feminization Surgery" video. How has that experience been?

The facial feminization surgery went really well. It was very personal to share, but I knew it could help other transgender people who were interested in taking that next step to being themselves. It's not easy being an openly trans person/artist. In my teenage years it was very hard for me to keep such a big secret from people. I hid half of my identity because I was so scared of being someone's easy target and I didn't want to be looked at as vulnerable. I had a huge fear that being fully yourself meant that you're leaving an open door for people to criticize you. I just grew up knowing that not many are used to people being themselves and often don't accept it.

I've already been through my fair share of hate on that front. Middle school and early high school was harsh. That's why I think it's so important now as an adult to write songs like "boys will be girls," "I Met Sarah in the Bathroom" and "your beauty standards can suck my dick" for people like me who went or are going through the same things I did. I'm incredibly happy these songs reach the ears of people that need to hear them and let people know that it's okay to be different. It's okay to not please every single person. If you listen to me enough, you will catch on that I'm an open book and love to inspire people sooner or later. I like putting the real shit out there. I'd say my biggest success is helping people as I discover myself.