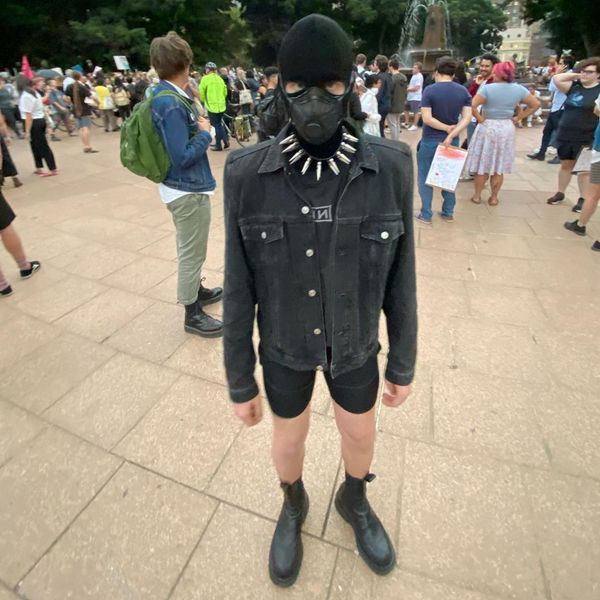 Sydney is unrecognizable right now. With nearly 100 wildfires burning through 8,300 square miles of surrounding bushland, the city is currently choking on smoke haze so thick that residents are being medically advised to stay indoors. Air pollution is catastrophic, and with no rain forecast for months, visibility may not clear until February. Instead, an unprecedented number of fires will burn indefinitely, destroying homes and lives and lungs while instilling a deep sense of national dread.

Unless carbon emissions are drastically reduced within the next few years, this is Australia's awful new status quo. Those living under the ash cloud have already been forced to adapt — hospital masks are ubiquitous on the streets, to the extent that cynical start ups are already sponsoring Instagram ads for chic air filter solutions.

This week, stylist Kurt Johnson experienced a viral moment when his Tank Girl-inspired apocalypse 'fit, complete with Vetements balaclava, was splashed across the the Daily Mail homepage. As Australia's government refuses to act on climate change, he hopes the photos will shock readers into action.

PAPER caught up with Johnson to learn more about the crisis behind his fashion statement.

What's the smoke situation like in Sydney right now, for PAPER readers unfamiliar with the situation?

For the past two weeks Sydney has been blanketed in a smoke haze that has made the air up to 11 times above "hazardous" levels. The new normal is staying indoors, and if you need to go outside, it has been advised to wear a P2/N95 particulate air purification mask to avoid any long term health damage from the smoke. Pets are being locked indoors, with a city too scared to step outside. All are suffering a collective sense of despair as the apocalyptic red sun sets every day. Over 1,000 homes, six human lives and countless lives of native species like koalas have been lost to these apocalyptic fires.

How are people around you feeling — is there optimism, or despair?

Yesterday 20,000 people turned out to a rally at Sydney's Town Hall to protest [Prime Minister] Scott Morrison, [New South Wales Premier] Gladys Berejiklian, and in turn the Australian Liberal and Labor parties' inaction and silence on what is happening in our country.

The last two weeks, the people of Sydney have all felt waves of emotions. That helplessness, despair and horror have quickly turned into a city that is mobilizing, fighting and taking action against the government who remain silent in the most damaging bushfire season our country has ever faced. We are angry, we are passionate, and we are going to keep resisting until something is done.

Walk us through your smoke 'fit.

The smoke 'fit! I've been, albeit morbidly, joking with my friends that this is #tankgirlsummer (shout out Megan Thee Stallion for the inspo). We are all channelling our inner Tank Girl as we have to don our P2/N95 masks as we leave home every day. The resistance is anarchist! It is the apocalyptic future Australia that is the setting for the original Tank Girl comic series. We are living it.

Is that a Nine Inch Nails tee?

It sure is! NIN is my choice for apocalyptic soundtrack, the exact kind of energy we need to resist against this colonial, neo fascist government who are letting our country burn.

I recommend listening to "Head Like a Hole" before heading out to your next protest. It's an anti-capitalist, anti-establishment anthem!

Antonio and Paula’s wedding day - in front of the most iconic backdrop in #sydneysmoke https://t.co/jRwm32EqmA
— ANDREW THOMAS (@ANDREW THOMAS)1575939619.0

Were you hoping to raise awareness with the outfit, or just look cute during the apocalypse?

Bit of both to be honest. I knew the Vetements balaclava would shock people, which is exactly what I wanted to do. I wanted people to be confronted, because the time for complacency is over. We need to take action, we need to be afraid and we need to be angry!

How common are air masks in Sydney right now?

Too common for my liking; they're the new normal, which is absolutely terrifying.

Have others gotten creative with their masks like you have?

I haven't seen any wild masks, but the picketing signs have been genius! "I am into being choked, just not by smoke" was my personal favorite from yesterday's protest.

How does it feel to be featured in the Daily Mail?

In seriousness, now that you're making headlines, what do you want to tell the rest of the world about Australia's bushfire crisis?

Australia's climate crisis is a direct result of decades of inaction towards climate change.We need to take action now! The time for complacency was over a long time ago, but if we don't act now the future of our planet is a bleak one I do not want to think about.

They lived for tens of thousands of years on these lands in harmony with the earth, and it has been colonisation that has led us to this catastrophic state we are all experiencing. The fight for climate justice is the fight for indigenous sovereignty!

Do you have a message for the Australian and New South Wales governments?

Invite the Indigenous owners of the land on which we stand, land that we do not own, land that is stolen, to the conversation. Their knowledge of the land is far greater than your own. Listen. Learn. Implement.

The Australian people have had enough, we will not continue to be complacent as you continue to destroy this beautiful country that we are all lucky enough to call our home.

What can people in Australia and overseas do to help?

Turn up to protests, strike from work if you are in a privileged position to do so, donate money, be loud, do not be complacent any longer, because at this point complacency is complicity.

Here are a few links to donate money to the NSWRFS (our fire services whose funding has been cut $26.7million by our corrupt government), and other charities including the rescue, restoration and care of the koalas who are now facing extinction, funding masks for the homeless population of Sydney, and Vinnies, who give support to the families whose homes have been lost or who have lost family members in these bushfires.

Every donation counts, even if it's a few dollars per charity, the assistance would be endlessly helpful as our government refuses to take any action on the crisis we are living.