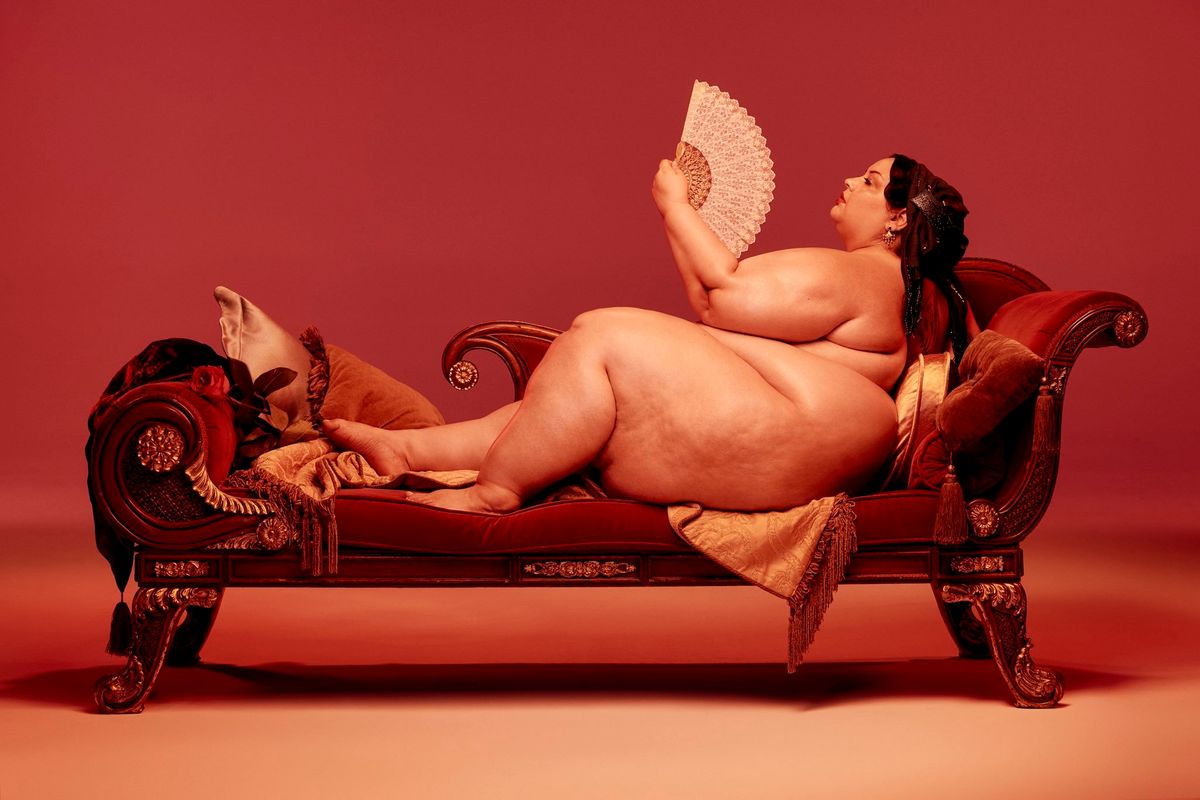 Miley Cyrus' new music video, "Mother's Daughter," has quickly become the centerpiece of all pop cultural discourse this week for several reasons. Aside from garnering significant attention for calling virginity "a social construct" (I mean, she's not wrong), the singer also set off a social media debate for featuring a plus size model.

The model in question is Angelina Duplisea, who can be seen fanning herself as she lounges across a chair naked. Atlhough brief, her cameo was picked up pretty quickly — especially after Twitter user Pamela Umeh criticized Duplisea's appearance in a now-deleted Twitter post. "Don't care how I'm viewed but someone has to say it," she wrote. "This is not healthy, this is obesity that leads to health problems and shouldn't be praised or accepted because society has become so sensitive to everything."

Within minutes, other users started pouring in with their own take on the topic. While many were on Umeh's side, furthering the hateful discourse, others came forward in Duplisea's defense.

"I've always been a fighter. Maybe not always in the most productive way, but fighting for myself, a friend or even for a stranger who is being bullied has always been a part of my personality. Fat acceptance is based on the notion that all fat people, regardless of health, deserve respect. And it's a battle that is fought every day by thousands, including myself. Social media's accessibility allows us to peek in on others living their lives, but too often the conversation turns negative when there are fat bodies involved. People just love to leave awful comments on fat folks photos in order to feel superior and I promise you, not one of these commenters actually cares about the health, family, environment or whatever bullshit reason they give for their vile behavior towards a fat person.

And really, how in the hell does health matter in the context of someone just posting a photo of themselves feeling happy and confident? (HINT: it doesn't matter, stop pretending like it does) Next time you see a fat person posting pictures of themselves living their life, stop and ask yourself why you wish to spoil their joy. I guarantee that you can't come up with a valid reason that isn't based in your own ego gratification. Stop it and do better! We humans have a lot to learn, but we can start by fighting our personal biases and permitting people of all genders, races, sexualities, sizes, abilities and health levels to live harassment-free lives. Don't fuck with their freedom to feel happy and beautiful right now, not just when society says it's ok."

Duplisea's sentiments aren't solitary and have been time and again reiterated by multiple artists across various platforms. The model and activist has also deemed her experience of working within fashion "painfully slow," as tokenization and checking boxes continues to be the norm in an industry otherwise shoehorning diversity.

Talking with PAPER, Duplisea reveals her experience working in both entertainment and fashion, inclusivity, and dealing with fatphobia,

How did you end up being cast in the video?

I was contacted by a member of the video production team. I googled them to make sure they were legit (they totally were) and a couple of weeks later I was on set.

What was your initial reaction to the fatphobic comments? Were you angry?

Honestly, I expected it and even went so far as to warn my family about the possible onslaught of negativity. I'm not particularly angry about it, but it is annoying. Like a roach infestation you just can't seem to get rid of, these kinds of people will always slip in and leave their toxic shit everywhere.

"It requires little to no effort to mind your business and let someone feel good for a modicum of time."

How do you deal with all the negativity?

With bemusement and a little annoyance. All this drama for someone who is just living their life seems a bit much. Why does my job, my existence create such a visceral need for people to make sure I'm miserable? I mean if we're talking about lack of self-control, these people exhibit it in spades. It requires little to no effort to mind your business and let someone feel good for a modicum of time.

A lot of Twitter users have cited "health concerns" around obesity as the primary reason behind the hateful comments. What are your thoughts on that entire discourse?

If they were legitimately concerned about people's health, they wouldn't leave hateful and abusive commentary. Mental health is a very neglected part of healthcare in general, and its something that these people conveniently forget when unleashing their vitriol.

I will 100% admit that I'm not healthy, however, that shouldn't be any kind of justification for the level of harassment that strangers feel free in doling out. For some people, perfect health isn't accessible and it in no way should be a reason they aren't allowed to live a life where they feel happy and appreciated. As I said in the caption of the post on Miley's Instagram: People just love to leave awful comments on fat folks photos in order to feel superior and I promise you, not one of these commenters actually cares about the health, family, environment or whatever bullshit reason they give for their vile behavior towards a fat person. Next time you see a fat person posting pictures of themselves living their life, stop and ask yourself why you wish to spoil their joy. I guarantee that you can't come up with a valid reason that isn't based in your own ego gratification.

Tell me about your experience working within both fashion and entertainment

Painfully slow. My main area of modeling has mainly been contained to fine art and I love collaborating with incredible photographers like Sylvie Blum, Allan Amato, James Mountford, and Gerard Rancinan, who have created art that has been shown in galleries and museums worldwide. Shooting with Vijat [Mohindra] for Miley's video was a long time dream come true and clearly, the work got people talking.

I'd like to move into more editorial work. I'd love to shoot with Vijat again or one of the many photographers on my bucket list. As far as the entertainment business, I've been so lucky to get the high profile gigs I've had. Some have happened via networking (Jessie J, Mariah Carey), but most through my own hustle (Miley Cyrus, Thirty Seconds to Mars) and willingness to put myself out there. The entertainment biz seems more open to fat fat people, and not just as comedic relief. Shows like Dietland and Shrill allow (acceptable) fat actresses to do more than be a punchline and I'd love to see more productions that include fat people just existing as people rather than, "Omg, a fat person LOL."

Plus fashion hasn't been as welcoming; it's still stuck at having the majority of models being size 12 or 14 and they act as if fat people should be thrilled with the one mediocre size 20 plus white model they've chosen to represent us and they give us the clothes to match.

Most of the good plus stuff is between sizes 12 and 18, and the models will match that. There are so many incredible models out there (Instagram is a goldmine!) that are size 22 plus. It's a shame that they aren't given as much shine because of gatekeeping and the industry's general apathy towards change.

"Why does my job, my existence create such a visceral need for people to make sure I'm miserable?"

Despite growing awareness, industries like fashion and beauty still appear to be checking boxes more than anything else. Why do you think that is and what can be done to change the situation?

Stop patting yourselves on the back for token inclusivity! Cast real people in more than just your annual show of wokeness. Instead of making the singular campaign a big deal, just hire the people and put them in your marketing materials all year round. It really shouldn't be this hard; you are selling products not people, so show the people what the products look like on them. Stop half-assing those photoshoots. The excuse is always, "People don't like looking at xyz," but y'all put the least amount of effort and the full amount of bias in those productions and it shows. Do better.