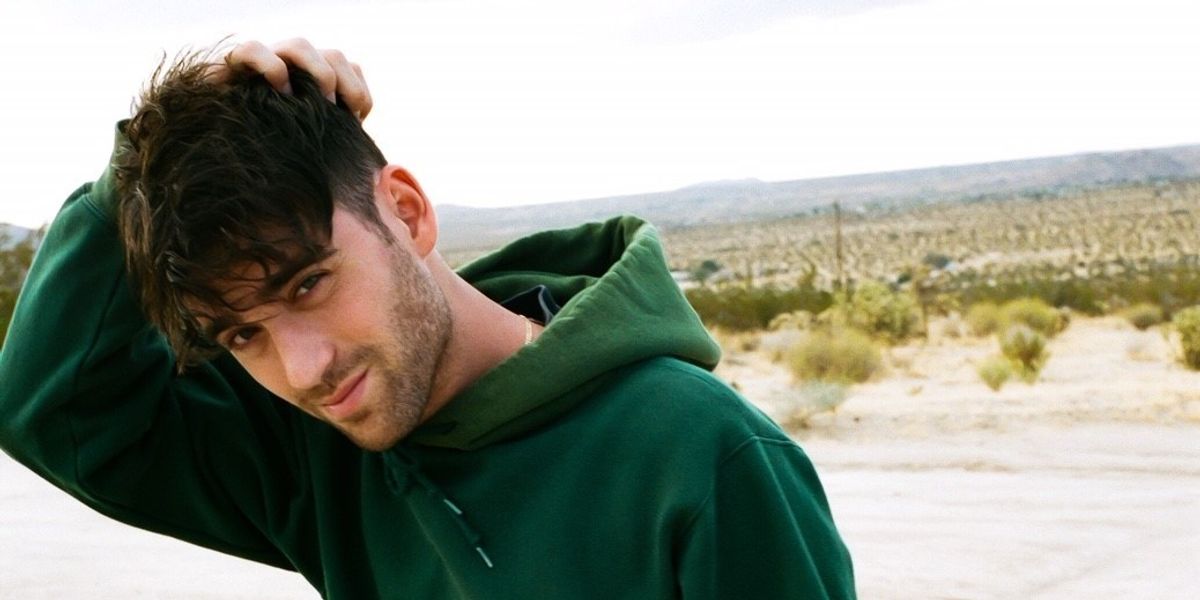 Alexander 23 Is Lovesick in the Best Way

You've never heard anything as ultra-2019 as Alexander 23.

When the steady whine of the chorus to "Girl," a standout track on his debut EP, I'm Sorry I Love You, kicks in, it's emotional chaos. An oscillation between begging, pleading, loving, and caring takes form almost immediately with a swift kick to the heart: "Girl tell me all of your secrets/ From the darkest to the deepest." Even after the earworm chorus, he breaks the song up into a mode that's reminiscent of the 140-characters-or-less expressiveness that we've become accustomed to. "Girl-gi-gi-girl," he echoes before the beat breaks down even further upon the track's conclusion.

After speaking with the proudly DIY producer and writer, it becomes even more evident that he was meant to make music for a generation that knows the softer side of intimacy through GarageBand hi-hats and low-passed vocals. He's the embodiment of "chill" in the most clearly genuine way. While dissecting I'm Sorry I Love You, he takes the stance of conversationalist; he wants to discuss his music rather than tell a journalist all about it.

To reduce the new EP to only an assembly of lo-fi tracks is a disservice, though, due in part to the fact that he's so tuned into the voice he's crafted lyrically and sonically. If nothing else, he's intentional — and with that intent, he's got the calming pop prowess required to be a hitmaker.

Read PAPER's interview with the rising producer and singer, below, and learn more about his specific production techniques, journey to full-time artist, and the new EP.

We can start with the 13 Reasons Why feature. How has that been?

It's been really cool!

Did you record the song for the show specifically, or was it for your album?

There are heavy hitters on your own EP, too. The song on the TV soundtrack, though, just captures the show's tone. Is it in the show as well?

I haven't seen the season yet, so I have to do that.

I saw my song in it! I downloaded it on the plane and watched that part.

I had a chance to listen to I'm Sorry I Love You. I like the title a lot, it captures the feeling that it's going to be a melancholy pop album. It's all very lovey-dovey, too. Where does that perfect storm come from?

I'm personally just drawn to contrasts in music. If the lyrical content is super sad, I want it to sound happy. If it's a little bit happier, sometimes I go deeper in the production sound of it. I write songs mostly and I produce them all by myself, so it allows me to make those choices and be super conscious about what I'm choosing to do.

When did you start producing, and what format do you think of using?

In high school I would record myself, but I wouldn't mark that as a start. I think that maybe two or three years ago I got serious about it. The original motivation was: how can I rely on fewer people? I love producing and I love playing multiple instruments and doing all the vocal tracks myself. The original motivation was that I want to have an idea for a song and just be able to make it, and not have to worry about other people finishing stuff and communicating.

What DAW [digital audio workstation] do you use?

Do you use Push as well? Or just drag and drop?

I don't actually. I'm a drag and drop guy. Do you produce?

No, but I've talked to enough producers to know! I do know a good amount about the workstations. I've had to learn quite a bit about production in order to write about it.

I think the great part about having all of these programs available is that producing tools have become widely accessible to learn about and use.

The only barrier is wanting to learn and wanting to do it. It used to be like, "Am I going to spend five hundred dollars an hour at a studio?" That's an intimidating task, but now you can just download a version of anything and get started. I love dragging and dropping because I think it forces me to make beats and make rhythmic decisions that I wouldn't normally make if I was just playing it. I would just go to my tendencies and what I naturally play. I like it because it's almost like blindly programming something in, I take the parts I like and move on from there.

I have tracks off the EP that I definitely want to talk about, also. "Dirty AF1s," right now, is your most viewed YouTube video. Can you talk to me about producing that and letting that sound form the rest of the project?

Sometimes it's so hard and you just pour over the song for so long, but that one was just instant, three hours and it was all out and done. Having said that, a lot of the lyrics I had been stirring up in my brain for a while, but it just all came out at once. That was one of the first songs I ever made that totally felt like me. I wanted to put it out, and I wanted people to be like, "That's what he sounds like, and that's the type of thing we can expect." Maybe not musically what "he" sounds like, but that's the quality and degree of interesting we can expect.

Is that your vocal sample that's underneath the track?

That's like how all of the production started, and originally the whole song was over that. I just wanted something slightly jarring at first for people to ask questions and become interested in it.

The other one that stands out to me because it's sonically the inverse of the rest is "Girl," which is my favorite song. It's one of those upbeat songs about such a personal thing, where the other ones sound much more melancholy.

That was also one of the first songs I ever made where I realized that this is fucking cool. That's what's cool about those two in conjunction: there was a point where I had three songs and those were two of them, and I loved having those two and playing those two for people because I feel like it paints a spectrum of what I want to be and what I want to sound like. Especially production-wise. "Dirty AF1s" is very barebones and has real drums, and I think "Girl" is the exact opposite, it's got programmed drums, and right away you get the full chorus, full melody.

What was the oldest song on this record?

"When I Die" was the first one I wrote. And I actually wrote it in New York at 2AM. I distinctly remember the feeling of not knowing what this is or when it's going to come out or what's going to happen. I wasn't even writing for myself since I was doing stuff for other people, and I just realized that the song felt like me and it was what I wanted to be like. Maybe not every song sounds like this, but as long as I have this feeling when I write a song, then I'll know it's the right fit.

From what period of your life are these stories coming from?

Do you write with anybody else?

I usually write by myself. There are a couple of songs on the album that I co-wrote with a couple of friends, but the rest is just me and I produce everything. But I think the songwriting voice allows me to expand production ideas.

Were you producing songs for other people prior to the EP?

I was starting to get into it, and it's why I moved to LA in the first place. I was supposed to do production for other people. And then I just started getting bored of not doing my own thing, and that was less than a year ago. I called my publisher and I was like, "I'm so sorry but we have to cancel everything" and I was waiting to get yelled at, but she was like, "Okay, that sounds cool. I can't wait to hear what you do." It was just awesome. That was almost a year ago and it's been fun so far.