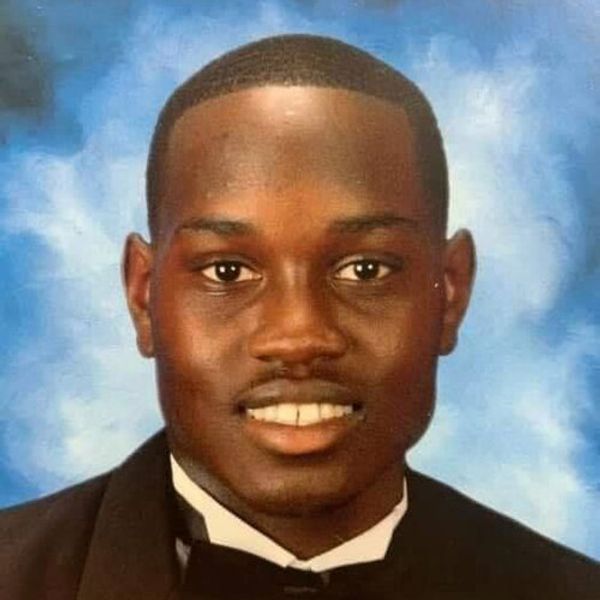 How You Can Demand Justice for Ahmaud Arbery

Activists and everyday people are calling for justice following the killing of Ahmaud Arbery. Arbery, a Black 25-year-old, was jogging his regular route through Brunswick, Georgia when he was shot and killed by two white men on February 23. Though he was buried months ago, no arrests have been made, reports Vox. It was only this week, when video of Arbery's death went viral, trending the hashtags #AhmaudArbery and #BlackLivesMatter, that a prosecutor agreed to send to send the case to a grand jury.

A 36-second video of the incident, which is being compared to Trayvon Martin's death, shows Gregory and Travis McMichael, a father and son, the former of whom is a retired police detective, follow Arbery in a pick-up truck and assault him unprovoked. The McMichaels told police they attacked him because they believed he was a suspect in burglaries in the area.

Civil rights attorney S. Lee Merritt, who is representing the victim's family, says the crime was a clear example of a racially-motivated murder. Arbery's mother, Wanda Cooper, told CBS News that the video "proves that my son was not committing a crime. He was out for his daily jog and he was hunted down like an animal and killed." Prominent voices like LeBron James, Nina Turner, Stacey Abrams and Joe Biden have also spoken out.

Thank you to @ninaturner for sharing your strength and rage and heartbreak with us this morning. "They hunted him… https://t.co/R4BCYXubfw
— Krystal Ball (@Krystal Ball)1588865530.0

As more needed attention focuses on the troubling killing of #AhmaudArbery, our systems of law enforcement and just… https://t.co/Y97bIhnGw9
— Stacey Abrams (@Stacey Abrams)1588715901.0

The case has gotten complicated. Two prosecutors have recused themselves because of relationships with the McMichaels', and a letter from the second obtained by the New York Times, showed he believed them innocent based on Georgia's stand-your-ground laws. The new prosecutor, District Attorney Tom Durden, who was appointed to the case on April 13, just called to open an independent investigation this week. The case will be presented to a grand jury to decide if criminal charges will be brought against the McMichaels. Civil rights advocates are furious over law enforcement's apathy and stalling, as well as the reality that the McMichaels will continue to walk free, since courts are closed for at least another month due to the pandemic. The Southern Poverty Law Center and other advocates are calling for a Federal investigation given delays at the state level, per Vox.

The ordeal has reignited a conversation over the politics of viral videos displaying violence against Black people, and their necessity in mobilizing the public as well as law enforcement.

Supporters are hosting a virtual vigil on Friday, per CNN. While Arbery's community is grieving, advocates are working to push for the case forward.

Here's how you can get involved:

The Grassroots Law Project has created a #RunWithMaud petition in collaboration with Arbery's family You can learn more about the case and Arbery's life, and each signature will send a letter to officials who have the power to make a difference in this case.

Make calls to the Department of Justice and the FBI.

The #RunWithMaud petition website has a dialer service set up to let various law enforcement officials know you're angry and paying attention. First up: "At the federal level, we need to persuade the leadership of the Dept. of Justice and FBI to investigate and prosecute this case as the hate crime it is."

At the local level, advocates are trying to persuade Durden to bring charges against George and Travis McMichael and request that a special prosecutor take over the case. The same dialer service will direct your calls to his office.

Kemp has offered the Georgia's Bureau of Investigation to assist with the case. However, many are skeptical he's fully supportive. Express urgency around the investigation, and ask that the state do everything in its power to provide justice for Arbery.

Participate in the #IRunWithMaud run.

Arbery's old football coach is hosting a mass vigil in the form of a 2.23 mile run, representing the date of his death, in honor of the former athlete and in solidarity with his family. He's asking runners to post photos of their runs, and keep the hashtag #IRunWithMaud trending.