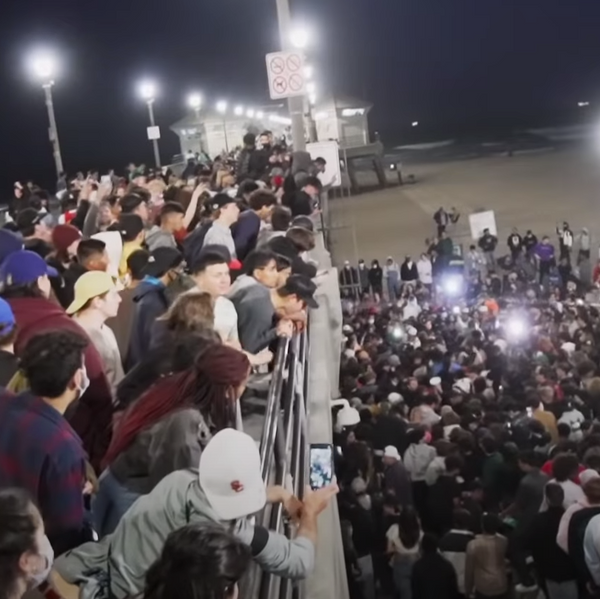 A TikToker's giant birthday bash ended up resulting in 150 arrests on Saturday night.

Last week, user @adrian.lopez517's posts about his "Adrian's Kickback" party went viral on the platform, attracting thousands of revelers who flooded into Huntington Beach, California this past weekend.

According to reports, things started getting unruly around 7:30 p.m. on Saturday when partygoers began setting off fireworks and crowding the streets. Not only that, but videos from YouTubers Steezy Kane and TikToker @TheSyncUp also appears to show people climbing flagpoles, using their cars to do donuts and jumping off what seems to be a boardwalk to crowd surf.

In response, Huntington Beach deployed 150 officers to break up the gathering and imposed an emergency 11:30 p.m. curfew lasting until Sunday at morning. Not only that, but TMZ went on to report that the kickback led to arrests of 121 adults and 28 juveniles on charges such as failure to disperse, curfew violations, vandalism and firing dangerous/illegal fireworks.

However as the publication also noted, people on the ground also shared footage of HBPD apparently began using tear gas and what @TheSyncUp described as "paintballs" on the crowd, though no major injuries have been reported as of now.

Some bottles, one firework and a glow in the dark frisbee thrown towards the police. More less lethals (mostly pepper bullet munitions) into crowd. #adrianskickback pic.twitter.com/0XAKIp4Zcy

Prior to the party, the police tweeted that the department was " actively monitoring multiple social media posts advertising a large gathering on the beach this weekend," before saying that the "safety & well-being of our residents, visitors, businesses & motorists is paramount."

"The which is why the Huntington Beach Police Department is taking significant steps to prepare for the potential influx of visitors, including working closely with our regional public safety partners," they went on to add. "Toward that end, the HBPD will also be strictly enforcing all applicable laws & ordinances throughout the weekend."

(2 of 2) ...is taking significant steps to prepare for the potential influx of visitors, including working closely with our regional public safety partners. Toward that end, the HBPD will also be strictly enforcing all applicable laws & ordinances throughout the weekend.