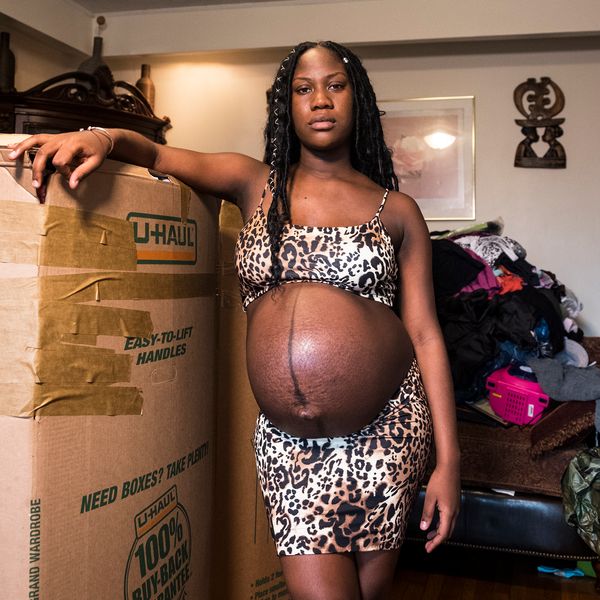 The Artists Transforming How Pregnant Women of Color Are Seen

Two years ago, Mexico City-based artists and husband and wife Travis Gumbs and Cynthia Cervantes launched a project that aimed to tackle what pregnancy looks like in their community. What they hoped to debunk was the myth of pregnancy as an unrelatable experience, while shedding light on just how personal and transformative maternity often is.

The project, produced by Maroon World, which Gumbs and Cervantes co-founded, is a photography installation called 9 Mujeres / 9 Meses ("Nine Women, Nine Months.)" It is on view in Mexico City's Fabrica29 art space through June 11, and is described as an exploration of "the nine-month journey from cosmic dust to human being," and an attempt to reconcile the "evolving spiritual and physical odyssey into motherhood" with our own passages from realm to realm.

Explaining more about the project's aims, Cervantes tells PAPER that the reality of having a baby isn't guaranteed. "It's a deeply personal decision that requires us to grapple with the truths of our own upbringings, the residual childhood traumas we may carry, and the current state of our mental, spiritual, physical, and financial circumstances," she says.

As Cervantes and Gumbs shot each woman, they spoke to them about their experiences with pregnancy. "The most confusing aspect for many women was this unspoken attitude towards pregnant women that seemingly serves to lessen the mystical magnitude of what they are going through and are ultimately going to do: nurture, develop and give birth to a human being," she explains.

Notably, this project centers the experiences of women of color — a mission Maroon World is committed to with special programming and their zine launches. Cervantes and Gumbs want to challenge long-held cultural assumptions through art, and "draw attention to the struggles and celebrations that unify people of color."

Cervantes adds that another reason for creating 9 Mujeres / 9 Meses was to provide rare access to the private moments of a woman's maternity process. "[We have] even less access to intimate images of birthing," she says. "Maybe this is part of the larger issue. Maternity is often portrayed in photography through an artificial lens: angel wings, mermaid tails, and milky flower baths. The reality is less glamorous yet much more spiritual and meaningful in our comprehension of this time period."