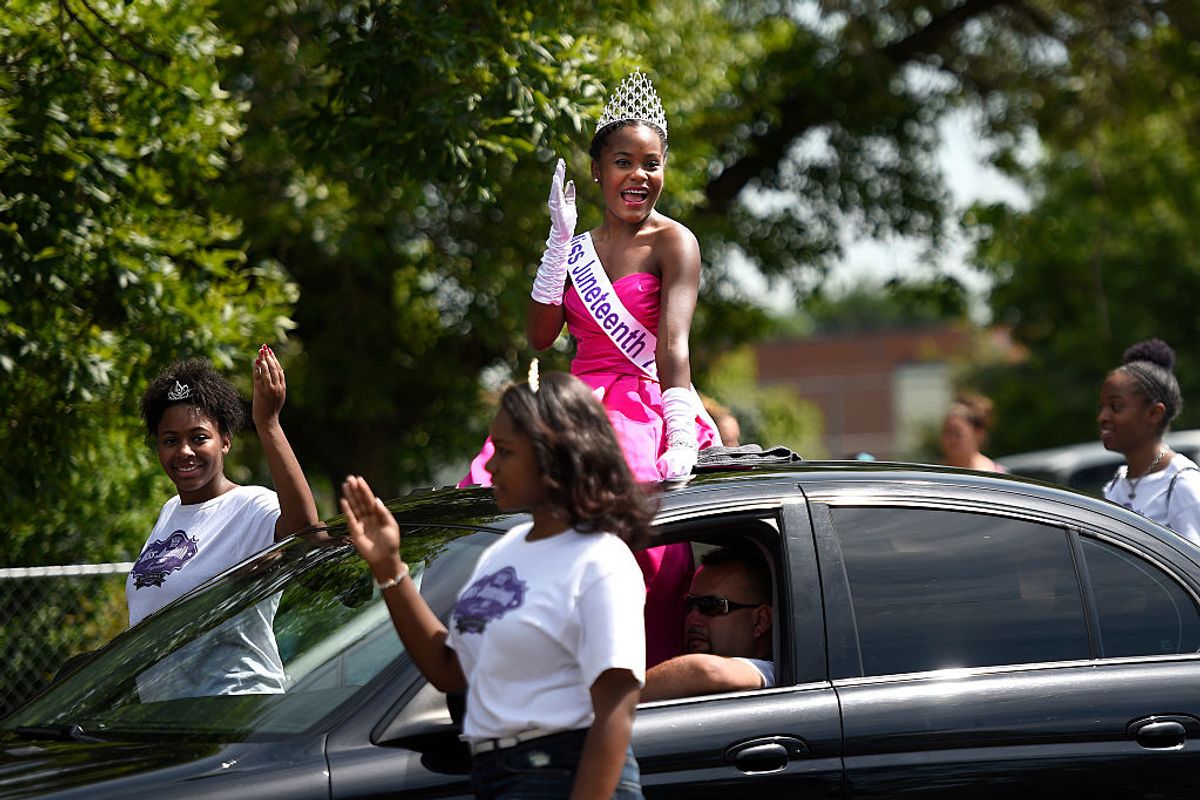 Why I Will Not Work on Juneteenth

I'll never forget how I felt when I first learned that Juneteenth isn't a national holiday. I was visiting cousins out east for the summer, and their collective perplexity when I asked what they'd planned for "Juneteenth" sits with me to this day. They'd never heard of the event, because at that time, it was still mostly isolated within the southern Black American community, and enduringly preserved by Black Texans. They dismissed the custom as a remote tradition confined to rubes of the south.

As a Black woman from Texas, their response confused me. I'd always observed Juneteenth, and already had nine or 10 formative encounters with the holiday. Even in childhood, Juneteenth's impact was integral to my cultural identity; the notion that it wasn't celebrated by every Black person in America seemed… impossible. But since its designation as an official Texas holiday in 1980, its influence has steadily grown beyond the borders of Texas and its neighboring states. In the last decade, nationwide enthusiasm has pushed Juneteenth into prominence, with 2020 seeing unparalleled mobilization and proposals to recognize it as a paid national holiday.

Juneteenth is the oldest known event memorializing slavery's end in the United States. It marks the day when 250,000 of the Confederacy's remaining slaves were informed of their freedom in Galveston, Texas, on June 19th, 1865, over two years after the Emancipation Proclamation was signed. When the executive order declaring the release of "all persons held as slaves" was issued in 1863, it was ominously limited, only freeing those enslaved in a small part the Confederacy while chattel slavery continued in southern border and secessionist states until The Civil War met its official end in 1866. Word of Proclamation 95 was also deliberately withheld by plantation owners looking to secure additional cotton harvests using slave labor unlawfully.

This thorny and often overlooked core of emancipation history co-opted by white Civil War narratives that romanticize Abraham Lincoln and the abolition of slavery is archived within the oral traditions of Juneteenth. I can't recall the exact moment I learned the truth about my ancestors' ostensible emancipation from slavery, but I knew it contradicted the saviorist retellings I'd been taught by academia that portrayed 19th century government officials as benevolent purveyors of Black liberation as opposed to the over 300-year enforcers of anti-Black slavery that they were.

The intercommunal sanctity of preserving the authenticity of Black history and the unity of Black people informs the passion behind why we celebrate Juneteenth. It is one of the few Black history observations that hasn't been marred by white revisionism, integration and commercial interests. Juneteenth was created to commemorate the jubilant spirit of emancipation day, and assure Black people that they could survive the turbulence of anti-Black racism in the post Civil War south through communal empowerment. Juneteenth belongs to Black America. It was made for us and named by us.

"In a country that has not reconciled its systemic white supremacy and perpetual bondage of Black humanity — from enslavement to sharecropping, wealth inequality and mass incarceration — Juneteenth serves as our Independence Day."

As Black people in the United States unravel the fundamentally anti-Black systems at the center of American pride and power, communities across the country are adopting the Juneteenth celebration as a unifying ritual that honors our ancestry, serving as a reminder that liberation can be achieved through mutual resistance that's independent of patriotic values. In a country that has not reconciled its systemic white supremacy and perpetual bondage of Black humanity — from enslavement to sharecropping, wealth inequality and mass incarceration — Juneteenth serves as our Independence Day.

When the slave-owning founding fathers declared their sovereignty from England in 1776, Black people in America were treated like livestock. They were not legally recognized as more than three-fifths a person until the late 1800s; furthermore, Black women could not vote as American citizens until the 1920s. Systemic exclusion from the autonomous rights of personhood without reparation and state refusal to acknowledge how ongoing abuse of Black labor has built the United States is why I refuse to work on June 19th.

Growing up, Juneteenth was a Black joy summer weekend, like a massive family reunion where your cousins were everybody Black. We wore matching shirts, played games, watched live performances, and had brisket barbeques. Today's celebrations maintain the sentiment of a closely-tied familial diaspora but with greater political undertones, stoked by the understanding that our unapologetic reparation, pleasure and rest is inherently radical when practiced beneath an institution that systemically suppresses it.

Today I celebrate by setting an away message, muting my work phone and taking a shameless week-long sabbatical. It's my way of resisting white supremacist capitalism, the unpaid reparations bill, and centuries of subjugation against Black women like me as lifetime fieldhands, wet nurses and domestic workers with little to no pay for the duration of their lives. I observe Juneteenth in their memory by reclaiming our time, indulging in self-care and engaging in Black communal joy and empowerment. As anti-Black misogynist attitudes of entitlement toward free or underpaid Black femme labor prevail, saying no to the exploitation of our livelihoods is an assertion of autonomy and how I make space for my ancestors that chose to leave those plantations nearly 150 years ago.

Juneteenth resurges during liberation eras, and the Black Lives Matter movement is no different. 2020 celebrations will commence with an unprecedented scope of Black unity through nationwide boycotts, protests, and festivities. It's a testament to the collective strength of the diaspora and our accord as we confront anti-Black oppression during one of the most documented uprisings in Black history. What was once a regional holiday tucked into corners of the south has become a global symbol of Black resilience and our fight for liberation in America. Juneteenth calls us to affirm our origins and assert Black autonomy; it reminds us that we're still here, knowing intergenerationally that true freedom must be predicated by abolition.