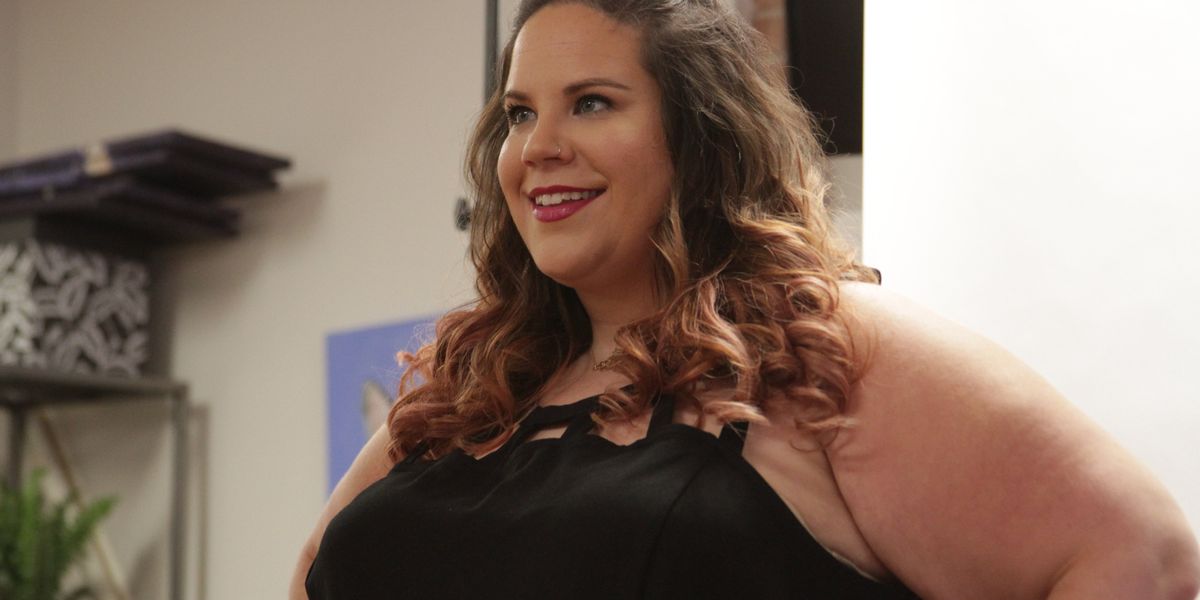 Fat and All That: Whitney Thore Loves Her Big Fat Fabulous Life

Whitney Way Thore is one of America's most famous fat people. The star of TLC's My Big Fat Fabulous Life first made a social media splash when a video she made called "A Fat Girl Dancing" went viral. Before she knew it, she was starring in her own reality show. The 34-year-old Greensboro, North Carolina native is larger than life and not shy about showing it.

She's a body positivity activist, spreading acceptance through her campaign, No Body Shame, and last year did her first "No Body Shame at Sea" cruise. While TLC show has a underlying message of loving yourself at any size, it's also a hoot to see Whitney get into all sorts of crazy hijinks with her friends and family.

With Season 5 under way, we caught up with Thore for Fat and All That:

So how did the TV show come about –– was it because of the viral dancing video?

Yes. I started doing the dance videos and I think the one that went viral was in January of 2014. In March I got an email from TLC — I actually found it in my spam folder.

You've got to check that spam!

It said, would you be interested in doing a collaboration? And I thought, 'Well, uh I guess so.' I came home and I told my mom and at this point of course I didn't really think it was ever actually going to turn into something that would be on TV. I said, "Mom, I think we're going to do this reality TV thing," and she was like, "Whitney I'm not doing it." But she's doing it and she loves it. Literally almost a year to the day after the video went viral, the first season premiered.

I love it. Tell me a little bit about your weight history. I know you have medical issues that contribute you to your size.

I was thin until I was about 18 years old. And it's funny to say that now because at the time I felt like I was fat, because I just didn't think I was thin enough. I had eating disorders from the time I was twelve really up until college, on and off. When I turned 18 and went to college, I started gaining weight really fast. I gained 50 pounds by the time I came home for Christmas break freshmen year. It was like a social experiment where you put on a fat suit and go out in public, because I had been generally just treated like an attractive young woman and then overnight my entire life changed in really overt ways but also in really subtle ways. That was definitely nothing short of traumatic for me.

You call yourself a fat acceptance activist. Why those words and what brought you to the place where you able to accept yourself?

I think it's important to use the word 'fat-acceptance.' A lot of times I say 'body positivity' because that's more digestible for people but truthfully, if you're not here for the fattest people, for the most marginalized bodies, then you're not really here for anybody. Body positivity is very diluted in popular culture. We have women who are thin by every measure pinching their skin and talking about how much they accept themselves and that's great for them. But we tend to applaud that, where when we look at someone like me who's visibly obese, we don't applaud that. We don't applaud that I'm comfortable with myself.

So, for me when I got there, I was at my heaviest, I was working in radio, I had to move back home and live with my parents because I was making minimum wage and I really just felt like in all aspects I was at the lowest point in my life. I'd gone through a big weight loss and then gained it all back, and I just really could not see a way out. I'd never felt lower in my life. It was my birthday and my mom gave me a little pendant that said, "Something good is going to happen." And I was being a brat and I was like, "Okay Mom, when is something good going to happen?" In that moment I thought to myself, "I have been thin. I have been fat. Ever since I was ten years old, I have always hated my body, no matter what. So maybe the problem isn't necessarily what I weigh. Maybe the problem is how I have refused to love my body at any stage." I made this promise with the universe that I'm just going to try for a week, for a day. If I get an opportunity that I would normally decline because of my body, I'm just going to do it anyway and see what happens. Literally the next day I got a message from a local photographer who wanted to do a boudoir photo set of me. I was like, "Girl, I would never, ever take my clothes off in front of the camera. When should I meet you? I promised myself that I would take this opportunity." So, I literally just went. I took these photos and then when I saw them, for the first time in my life, I actually didn't cringe. I thought I was beautiful. And that was an experience I had never had when looking at a picture of myself, no matter the size.

That was really the first time I had ever referred to myself as fat. I kind of cringed but then I was like, "Well no. Why should I?" I should know that this word is not synonymous with lazy and stupid.

I posted the photos on Facebook and I got a lot of hate messages. I got this one message from a troll with a fake profile and instead of writing a response on Facebook I just created a blog called No Body Shame Campaign. I wanted to just do No Shame Campaign but the gays had already claimed that! I really didn't even know what that term meant. I thought that I had just made it up. I didn't know that body positivity was a thing, so I was coming to these realizations in my mind and I didn't even know that people had been doing the work.

And that led to Fat Girl Dancing?

The videos were my coworkers at the radio station trying to build up our YouTube page. I knew that I would get a lot of hate but we were just trying to get views so I was like, "Alright, I'll do it and we'll call it fat girl dancing." That was really the first time I had ever referred to myself as fat. I kind of cringed but then I was like, "Well no. Why should I?" I should know that this word is not synonymous with lazy and stupid. The video went viral everyone was asking me to come on their shows. I did The Today Show, Good Morning America, Steve Harvey, CNN, and they were all like, "Let's talk about your campaign." It was literally a blogpost, but I was like, "Okay!" I just had this moment of I can stay here, literally and figuratively, and let this crazy moment pass me by or I can make this my life's work. I chose the latter. I remember when the video was going viral and I was doing interviews, I never in my life was so happy to wake up in the morning and I felt so lucky that I found that. Some people live their whole lives and never find something that they're super passionate about.

I love what you said about the word fat, because I say fat and people freak out! I say I'm fat and they're like, "Oh no, no, you're not fat, you're just a little chubby." I'm not fishing for a compliment. Fat is a word the way tall or short is a word. It's fat or skinny.

It's amazing the way people will fall all over themselves to convince you that you're not fat. I say to them, "No, what you mean is that I am fat, but you also like me, and you can't reconcile that."

Okay let's talk about Buddy [Thore's best friend] and the kiss. I read somewhere that there might even be another kiss coming?

And how do you feel about that?

You know, it's just weird. I feel like I don't even know how I feel about Buddy because there's so much history there. Everyone in my real life and also the fans are so obsessed. They're like, "You can't see the forest for the trees. You guys are meant to be together!" It really messes with my head sometimes. Are we meant to be together? I don't know. But what I do know is that Buddy is a very important person in my life and I love him.

I'll be tuning in. Also, I love, love, love your Big Girl Dance Classes now and I know that there's some drama with your partner and with taking him on the road. What's it like when you take a class on the road? Do you just advertise that the class is happening? Because it seems like such a great response.

Yeah! So basically, with Big Girl Dance Classes I just post it online that I'm going to be in this city, this city, and this city and they were sold out within like a night, which is really cool. It's hard doing it with Todd, I mean it's hard doing anything with Todd, let's be real. He's very difficult and he's always throwing shade and he's lazy! That's the funny thing, people look at me and Todd and think, "Oh that fat bitch is lazy," but really, it's Todd who doesn't want to put in the work! But I love Todd and I've known him since I was 15 and he inspires me, and he really does love me and support me. You'll see that too through the end of the season. I had a really cool dance opportunity in New York City — that might be the last episode if not it comes very near the end — but Todd comes through for me. We had an amazing time on tour, but it was also Buddy's sobriety. One day you're good one day you're not so good, but we all made it out alive.

Fabulous! All right well I look forward to seeing the rest of the season. Thank you very much and maybe I'll see you on the No Body Shame cruise!

I would love that.

All Images via TLC