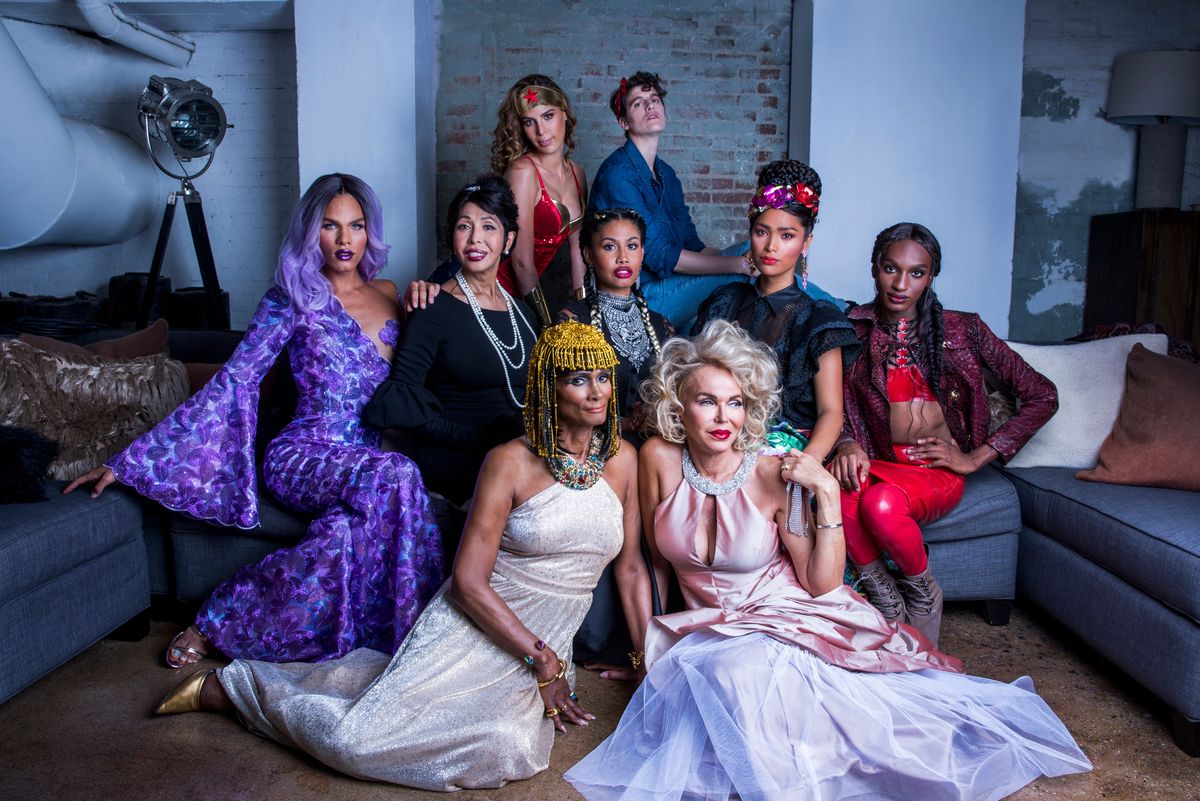 The past few years have seen a proliferation of trans models walking runways and appearing in advertisements--but while understanding and acceptance of transgender people has been rapidly growing recently, trans models were blazing trails and walking runways for decades before. In their newest show, Made to Model: Trans Beauty in Fashion, Logo brought together legendary trans models Tracey "Africa" Norman, Lauren Foster, and Crimsona Kaiser to meet, talk, and shoot with the new generation of faces on the runway, including Maya Monès, Carmen Carrera, Geena Rocero, Torraine Futurum, Leyna Ramous, and gender-noncoforming model Rain Dove. Logo tapped PAPER's own Drew Elliott to help conceive a shoot that would see all nine models pay homage to famous women, from Cleopatra to Marilyn Monroe to Beyonce, who challenged, subverted, and broke down traditional ideas about femininity, womanhood, and identity. Check out the show below, and peep the final amazing looks in the slideshow.

One of the new generation of trans models, Geena Rocero, also spoke with PAPER about the project, coming out in a TED talk, and how we can push for greater trans acceptance.

To share space with them was a dream come true. It took me back to so many memories as a young trans girl in the Philippines who dreamed of becoming a model. It was also very surreal when we were shooting that day because as an executive producer of this documentary, my mindset was going between the producer mode and at the same time allowing myself to just be in the moment. It was an honor to learn more about their stories, share a laugh together, and their level of perseverance to pursue their dream despite all the odds but most importantly to witness the three of them meeting for the very first time.

Your homage in the video was Frida Kahlo—how do you connect and identify with her? How did you help yourself embody her in the photo shoot?

Frida for me represented what it means to be an artist. She used her personal narrative and turned it into art. I tried to embody some of her iconic portraits by looking into the camera, very stoic, so composed, and I remember thinking "I am a Queen" and the flower piece in my head as my crown.

Who are your role models in the LGBTQ community? In the fashion community?

Marsha P. Johnson, Silvia Rivera, Lana Wachowski, Ellen DeGeneres -- for me they used the power of their voice to advocate for our community while also making art.

You came out via a TED talk in 2014—what inspired you to do that and choose that forum? Do you think visibility, like coming out publicly or appearing in Made to Model, helps advance acceptance and understanding for trans people?

In 2014, I was finally ready to claim my space of authenticity. I was also taking a big risk but my sense of purpose was bigger than my fear. By being visible and appearing in projects like Made to Model, people get to see that we are just like any other person in the world, wanting to pursue our truths and share our lived experiences with nuance and compassion.

Founding Gender Proud allowed me to go back to where I started and to advocate for trans rights. It also allowed me to produce stories of what it means to be a transperson today by covering subjects from the perspective of a trans person instead of a cisgender gaze.

You mention in the video that you had a decade long journey to finding your way to telling your story—were you ever disconcerted or ever wanted to give up? What kept you pushing forward for your career in modeling regardless?

Modeling, before I decided to come out in a TED Talk, was nerve wracking. Everyday I felt that soon enough someone will 'out' me and that the career that I built will just disappear, because it was a different time. There were many moments where I felt that I should give up but when I look back to where I started growing in the Philippines, that reflection on my journey allowed me to continue my path in pursuing my dreams.

What trends in the LGBTQ community and trans acceptance do you find most exciting or are you most optimistic about? What do you think are problems that still need to be grappled with and overcome?

I think that in our current political climate, our lives as an LGBTQ community are constantly being attacked. So we must uplift the stories of the most marginalized in our community intersectionally. To live your most visible authentic version of yourself is the best way to tell society that your existence is not to be erased but all about reclaiming your space.