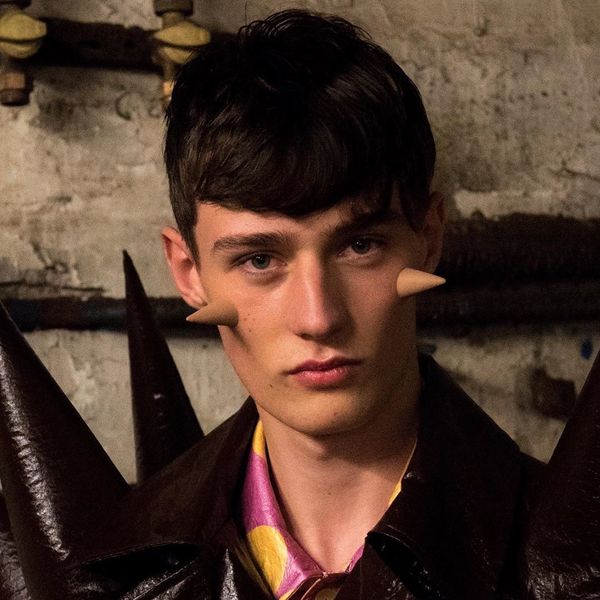 Absurd shapes and political statements were at the center of Walter Van Beirendonck's Men's Fall 2020 presentation in Paris. The Belgian designer, who was once a part of the famed Antwerp Six (a group of Royal Academy of Fine Arts graduates known for their radical design vision in the 1980s) remains known for his blend of unusual colors and use of strong graphics.

For Fall 2020, his runway became stage to spiked suits, bomber jackets, colorful patterns and obscure shapes. Amid the array of weird shapes and medley of prints, however, were sharp spikes embellished on the models' cheeks.

Dyed to resemble the color of the skin, the prosthetics was courtesy of makeup artist Inge Grognard. The ultra sculpted cheeks were balanced off with minimal to no makeup.

But Beirendonck isn't the type to shy away from the dramatic, as hair stylist Charlie Le Mindu topped off many of the spiked looks with brightly painted and colored hair in fiery shades of bright red, orange and pitch black. In some cases models emerged wearing their hair in giant and long coned shapes.

Often bordering an almost cartoon-ish aesthetic, the exaggerated hair and makeup signal a mainstream nod to the recent uptick in a range of Instagram makeup artists who have embraced the weird and eccentric.

Elsewhere on the runway, while designers such as Rick Owens have consistently employed the use of prosthetics, just last season Balenciaga sent models down the runway with hollowed cheeks and blown-up lips, also courtesy of Grogard.

Celebrities such as Lady Gaga have time and again famously embraced the prosthetics, most notably on her April 2011 cover of Harper's Bazaar where she appeared with horns on her forehead, cheekbones and shoulders. "They're my bones," the pop star said at the time. "They've always been inside of me, but I have been waiting for the right time to reveal to the universe who I truly am. They come out when I'm inspired."

Likewise, in 2018, musician SOPHIE sported extremely sculpted cheeks on the cover of PAPER and also wore prosthetics in her "It's Okay to Cry" music video, released in 2017.

The surge in the trend also alludes to the changing landscape of beauty where non-invasive procedures and plastic surgeries have become disturbingly commonplace. This is most reflected within the innumerable amount of makeup filters that use AI to dramatically enhance facial features.