Chipping Away with Vhils

While a student at London's Central St. Martins, Alexandre Farto, known globally now as Vhils, first gained major recognition through his participation in a street art festival organized by Banksy in an abandoned railway tunnel under Waterloo Station. Here, rather than painting on the walls, Vhils chipped away at them, creating striking portraits of faces in bas-relief. Now 31 and splitting his time between studios in Lisbon, Hong Kong and installations all over the world, the name Vhils has stuck (it doesn't mean anything — when he adopted the name at age 13 those were the letters could "tag the fastest"), but his approach has evolved into a practice where fine art meets urban archaeology, exploring themes of history, memory, and globalization.

The signatures of Vhils' oeuvre are large-scale portraits of anonymous faces etched into the sides of buildings, but his use of medias is far-reaching. He hand-carves collected layers of advertising posters, makes concrete cast sculptures, sculpts styrofoam with hot wax, painted, cut, and reassembled a train car for an installation at the EDP Foundation Museum, and recently collaborated with an architectural firm on a monumental building in Lisbon. The artist also maintains a slew of admirable extracurricular activities, establishing the Underdogs Gallery in 2011 and an underground art and music festival called Festival Iminente, both serving independent artists in Lisbon. Vhils' most recent unveiling is a limited-edition design for the Hennessy V.S. bottle, which launches June 11th and has an accompanying exhibition in Cognac, France.

PAPER recently scoped out some of Vhils's work around Lisbon, and had a chance to sit down with him in his studio to discuss the progression of his work as well as its relationship to place and politics, his message, and maintaining creativity in the Internet age.

Can you talk about how growing up in the landscape of post-revolution Lisbon shaped your work?

I grew up in an area south of Lisbon that was undeveloped, living in a building where there was nothing around. As soon as Portugal got into the E.U., there was an urban expansion. It was like a bomb had dropped in Lisbon and a wave of concrete arrived in the suburbs. I saw this process of change [happen] in front of my eyes. I started to do graffiti at the beginning, and it was my passion. It gave me a reason to fight for something. When I was 16 or 17, I started to think about why I was painting, why I was doing what I was doing. I realized that there were a lot of things in the public space: tiles everywhere, political murals from the 70s. 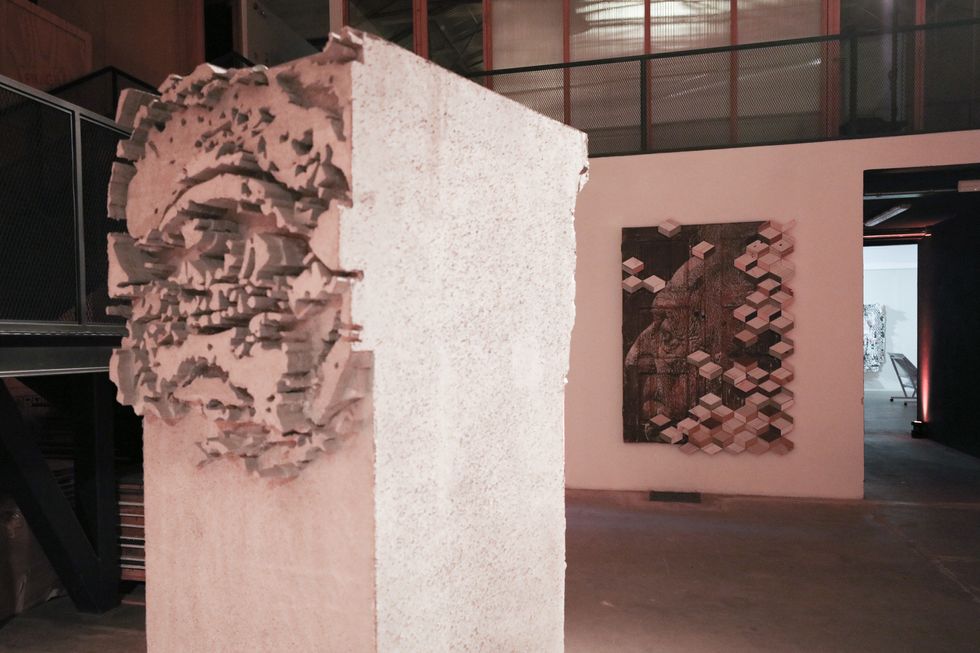 Can you talk about how growing up in the landscape of post-revolution Lisbon shaped your work?

I grew up in an area south of Lisbon that was undeveloped, living in a building where there was nothing around. As soon as Portugal got into the E.U., there was an urban expansion. It was like a bomb had dropped in Lisbon and a wave of concrete arrived in the suburbs. I saw this process of change [happen] in front of my eyes. I started to do graffiti at the beginning, and it was my passion. It gave me a reason to fight for something. When I was 16 or 17, I started to think about why I was painting, why I was doing what I was doing. I realized that there were a lot of things in the public space: tiles everywhere, political murals from the 70s.

Walls for me, since the beginning, were something very special because they absorbed the changes that were going on in the country. When I was doing graffiti I was adding another layer. I realized walls were a patchwork reflecting all these different things and a concept began to develop. One day I just had the thought, "Why am I adding; why don't I go and paint everything white, and instead of adding I'll extract and paint with the layers that are already there, in order to talk about that passage of time and the overlaying of things. A lot of the work was based on portraits, I wanted to create a link between everyday heroes that lived in the city and everything that we don't have time to process. Through those layers you could see how fast the pace of change was getting and how disposable all these layers are.

Given the influence of Lisbon and its history on your early work, how has the experience of working in different cities around the world affected your approach?

It's very different of course. This process and concept started here, but then when I started to go to other cities, I realized that each city has its own history, its own materials, its own past, and that past has a lot to tell. It made sense for me to go to different cities and reflect on the impact that the process of development, that becoming globalized, has on people. Wherever I am, I'm trying to reveal and expose the insides and the individual side of the city, and by doing that I'm trying to reflect on the passage of time, the fragility of what we're building, and on the things that impact us. I like to believe that I'm always researching and learning. 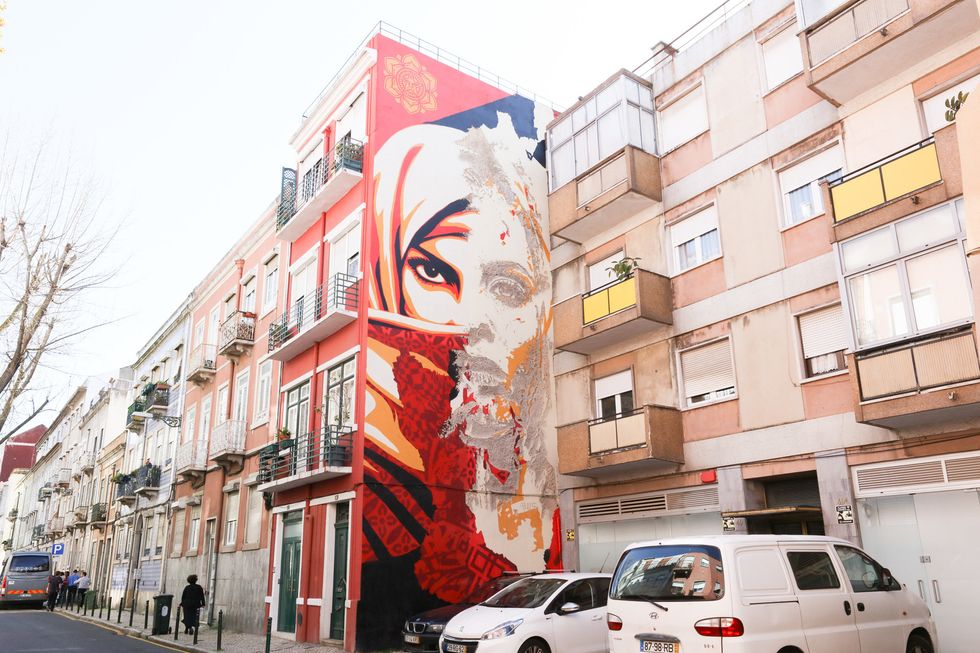 Does working in different cities affect the aesthetic of your work? One of the things that strikes me about your work in Lisbon is how much the style of your pieces here evokes the existing combo of manmade/weather-made decay in the environs. Sometimes I think I've spotted one of your pieces, only to realize it's simply erosion.

I try to leave that to the places where I work. I do try to incorporate the city's aesthetics and that erosion. Because I paint with the layers that are already there, the work naturally creates a link between the insides of those wall and the local aesthetic of that place, so the work doesn't try to impose itself. The colors are from there, the textures are from there, the stains that are there on the wall remain on the wall. When I finish I don't really think that the work is finished; after one or two years the work is finished because it starts to adapt and fade a little bit into the place, and eventually disappears. It's my intervention, but then the work keeps going. I like that. I like the fact that it changes, it has an evolution and eventually fades away. It makes the work more human. At the end, nothing lasts forever.

A lot of your work seems to be a critique of globalization. Do you feel that technological developments like the internet add to creativity and collaboration or do you think they lead to more homogenization? What's your role on social media?

It's a reflection. I wouldn't say it's a critique, more raising issues to reflect and expose the impact that it has on us. I think internet has given us a lot, but I think there is a downside to it. These are big issues; it's a pandora's box that will never be closed again. I think mostly what I try to do with the work is reflect on the shadow that is cast from all this development, to make us pay attention to issues and to try to get action and change through exposing those things. 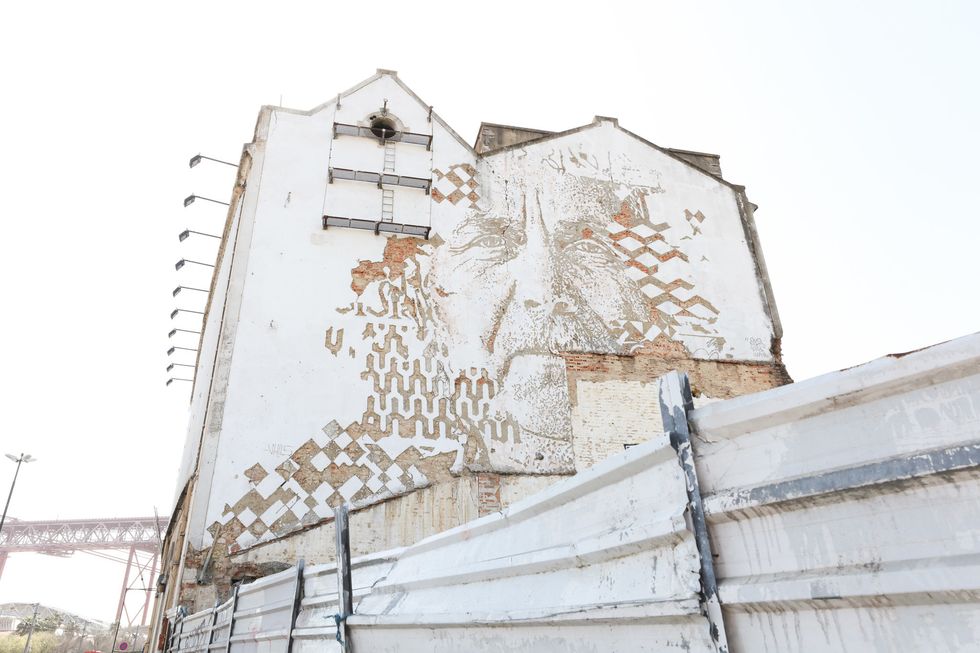 You've cited Gordon Matta-Clark as an influence. What point were you at in your career when you discovered his work, and what connections did you make. Have ever had the opportunity or desire to do anything where you're working with an entire building as opposed to just a wall, or the inclination to cut all the way through in the way he did?

I'm actually working on a project that's going in the direction of working with an entire old building as a sculptural element, in a way. I've had some experience before, but nothing like the one that's ongoing - I'm still figuring it out. My early influences were all graffiti based, and connected with that scene in the 80s like Dondi White. That was my background. Then when I was 18 or 19, I went to see a show by Gordon Matta-Clark and it really expanded my spectrum of artistic influences. I thought his work was so visionary. These were the very early days of working in urban space, and taking elements of urban space into an exhibition space to make people reflect on things. It was very strange for me at the time, and very impactful and meaningful to see someone who was looking at the streets with such a different perspective.

Would you consider your work to be violent at all? As with Matta-Clark, destruction and removal are integral to your process, and you do occasionally use explosives.

Yes, I do. The work is as violent as a city can be. The whole concept started with the preconception that any artist who was working on a public space was defacing and destroying, not creating. There was an energy that was happening but it was supposed to be chased and pulled away. It was vandalism. When I started to evolve by using extremes of vandalism to a facade, in order to create something that people could relate to and have a dialogue with, it was also a mission to subvert the idea that artists working on a space were destroying, by creating a different concept of what vandalism can be.

What was it like to have the Hennessy V.S. bottle as your canvas? This is very different than the side of a building or a slab of concrete.

It was a challenge, but an interesting one, because I wanted to create something that was relevant with the cognac itself, the glass and its shape. I think we found the two best medias, which were billboards and acid paintings. The one done with acid, I have a canvas covered with paint, which I burn with acid to create my image. I paint by burning the ink on the surface, which results in a dark yellow color which is very close to cognac. So, it seems appropriate, especially since it's a very liquid process. Otherwise, I incorporated a lot of the symbols that I collected at different stages of my research in the Hennessy archives. The idea was to draw out the graphic elements from the past. When the artwork is used as a label, it will have some die-cut, diamond-shaped open areas as well, so the cognac itself becomes part of the piece.

It seems that an overarching theme of your work is making the invisible visible, and all your endeavors tie so neatly into an egalitarian theme. Do you feel like promoting the arts at this community grassroots level is the solution to cultural homogenization?

It helps to create space and a social area for artists to sustain themselves and their practice, and to be listened to by society. The arts have always been the place where people are able to bring issues to public discussion, subjects that are relevant to the times that they were living in. That's the reason I feel it's important to create spaces, to try to create platforms that can elevate and create social spaces for artists and musicians, where they can showcase their work and make a living from it, but also to be able to give back and bring discussions to general society. I don't know, maybe I'm too idealistic.