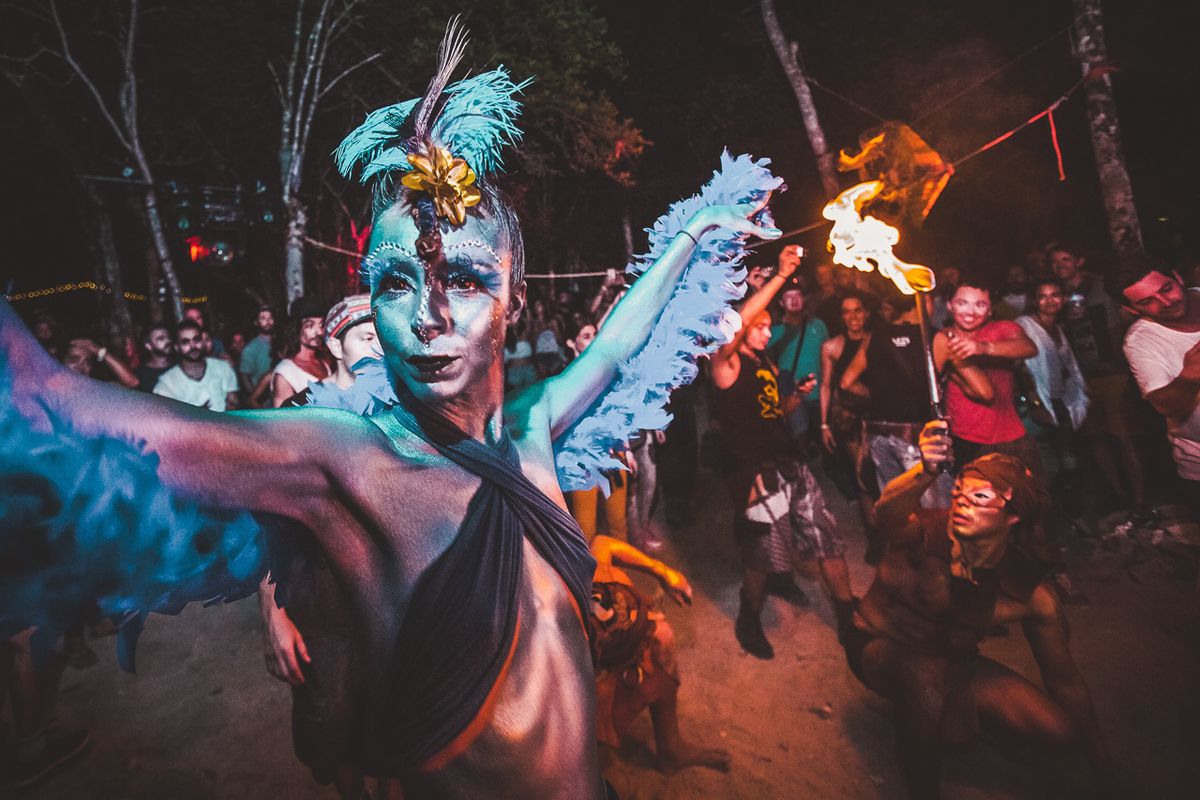 Ninety miles south of Cancun lies the small Mexican village of Tulum. A picturesque town situated between the lush rainforests of the Yucatan Peninsula and the Caribbean Sea, Tulum has historically been known for its well-preserved Mayan ruins and the gorgeous natural limestone pools, called Cenotes, that surround the area — but that is quickly changing. In the wake of Mexico's largest electronic music event, BPM Festival, ending many are now turning to Tulum as the country's hottest new musical destination.

Related | How to Keep A DIY Space Alive in Atlanta

"In the beginning, I saw Tulum as a place to escape from parties and electronic music, but as it developed and shifted towards an event destination," says DJ and Crosstown Rebels label head, Damian Lazarus. "I thought that if anyone should produce something there it should be me."

In 2012, the Mayan Calendar predicted that the world was going to finally come to an end and Lazarus saw this a the perfect opportunity to launch his latest event. "I experienced some life changing moments on the beach under the moon there and became moved to create an event in Tulum that would draw a connection between ancient Mayan rituals and the tribal being of electronic music." What better way to celebrate the apocalypse than to throw the party to end all parties, right? And so Day Zero was born.

"Over the course of the past seven years it's become one of the most magical events of all time," says creative director of Day Zero Eden Schroder. "Damian has always exhausted the idea of maintaining a constant flow of creativity and innovation within the house and techno scene." Buried deep within the natural amphitheater of Cenote Dos Ojos, Day Zero is already unlike any other techno festival being put on today but determined to go above and beyond attendees are also treated to a myriad of art installations and performances around every turn.

"Local culture and heritage stands at the core of the Day Zero experience," Lazarus emphasizes."From the inception of Day Zero we have partnered with local shamans who have helped guide our vision and insure that we are honoring their ancestors at every level." Day Zero even has its own designated head shaman, Carlos the Reindeer, that consults on how to best respect the festival's sacred land. Ancient Mayan history and culture is incorporated into every facet of the event from the stage design down to the various installations with the aim of educating attendees on history that lies just beyond the festival grounds.

"Tulum is a sunrise place; it was already a destination that people took pilgrimages to," explains Carlos the Reindeer. "People would come to the jungle and the temples to do ceremonies and make offerings for Venus, the Sun, and mainly Lxchel — known as the queen of this area. This has become an important place for people to gather and find spirituality, and to find solutions to their problems. They believe in Tulum's power and they get healed, and find clarity again. Healers come here to to help guide people; it's very ritualistic."

Lazarus and Schroder are also quick to stress that Day Zero is committed to being environmentally conscious and minimizing the festival's impact on its surroundings. "We are living by the refuse, reduce, recover and return principles," explains Schroder. "For example we refuse single use plastic. We will not serve with straws, we replaced the plastic water bottle with carbon and we serve the drinks in biodegradable plastic. We reduce our impact by carbon offsetting. This means that carbon emissions generated by flights of our team and musicians are compensated by forestation."

Day Zero also has its own designated sustainability manager that it appoints to come up with new ways the festival can further reduce its carbon footprint. "We rely on crowd responsibility; we use our platform to inspire care for the environment, and encourage guests to carpool, avoid littering, and ultimately, go by the Burning Man principle of 'leave no trace.'"

This year's festival is set to descend upon the Cenotes of Tulum January 11th with a lineup that features house and techno heavy-hitters like Black Coffee, Four Tet, Blond:ish, Bedouin, DJ Tennis, and Lazarus himself. Tickets are currently sold out but if you were one of the lucky few that are planning on heading down, Lazarus and Schroder urge prospective attendees to be mindful of their presence and open to new experiences.

"We make these events with a purpose rather than just making a party, and you can feel it inside," Carlos the Reindeer says. "When Day Zero started, it was in 2012 when we thought the world was ending physically. But this is wrong; in fact, we're in a new world, a new era of humanity."