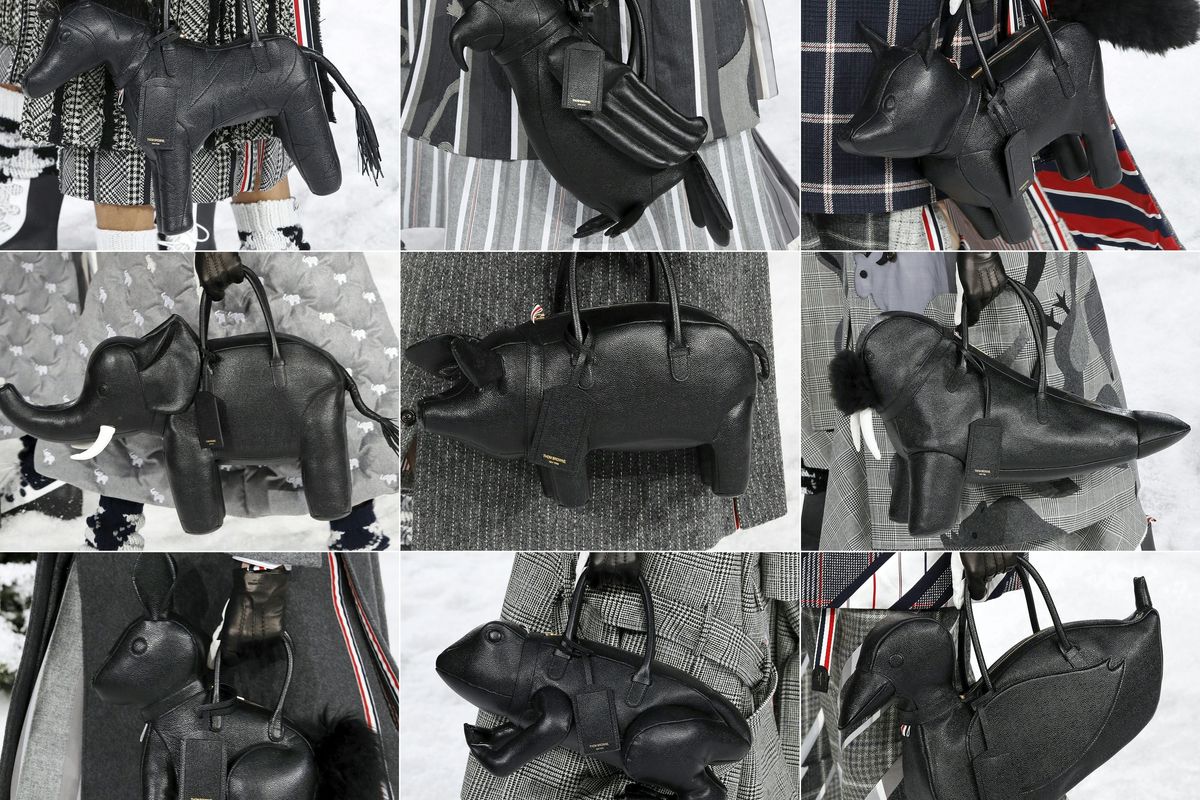 Which Thom Browne Animal Will You Be Carrying Around?

Thom Browne's love of animals is well-documented. After all, he's incorporated wild creatures into nearly all of his collections over the past 12 years, from dolphins at Versailles to whales and crabs at a preppy beach. His pet dachshund, Hector, is a perennial muse, serving as a fashion influencer and the inspiration behind his own dog-shaped satchel.

This season, Browne's fondness for critters goes a step further with a new range of Zoo-ready, sharp leather bags.

Related | Moses Sumney Is an Olympic Monument in Thom Browne

Titled the "Animal Icon" collection, the unisex handbags were a focal point of Browne's Fall 2020 runway show. Carried by 33 pairs of masked models, they represented the animal pairs from Noah's Ark, herded aboard a large wooden ark before a massive flood. At the show, Browne's bags swung through a winter wonderland set complete with frosted trees and fake snow.

Now, that lineup of leather lions, elephants, zebras and more has arrived just in time for the holidays.

Browne released two whimsical videos to accompany the bags' release. In one video, the bags take on a life of their own, enjoying the landmarks and sights of Paris. They romp through cobblestoned streets, sip afternoon champagne and ride a carousel, hinging on Browne's intention for them to be both fun and fully functional.

In a second clip, made to accompany a Paris Men's Week activation earlier this year, a group of guests masked in large animal heads attend a splashy evening party — complete with suited models as furniture. As the night goes on, the creatures gather for an ornate feast. The next morning, they tipsily wander out of their giraffe-masked host's mansion as the sun rises.

In Browne's universe, everyone can freely roam the streets and have decadent experiences wherever they please — why not animals?

Much like Browne's collections, the bags are crafted like works of art. As they take the forms of sheep, rabbits, bears and more, their complementary animals were studied for characteristics reproduced in each. Details like embossed cheetah spots, folded hippo and pig ears, and arched rooster claws are all rendered in black pebbled calf leather for the bags (individually taking at least three days to complete), which range from $2,700 to $4,890.

Each limited-edition style (only 20 to 30 styles were made for each animal) is available now at ThomBrowne.com.