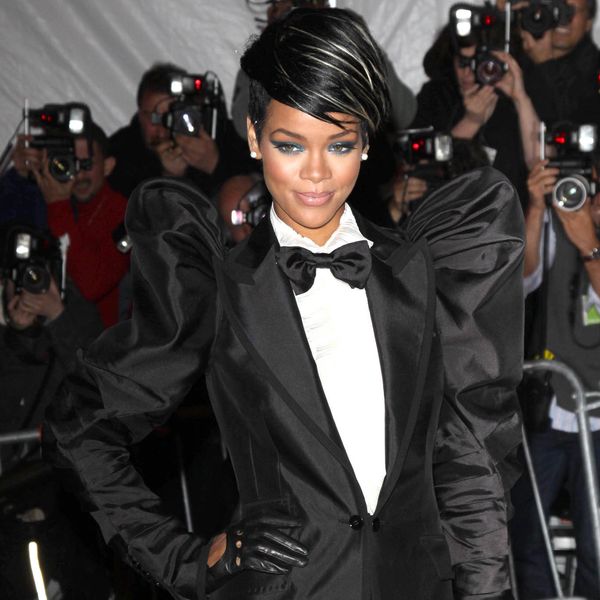 This week ten years ago everyone was talking about the Met Gala, obviously. The defining look of 2009's event (theme: "Model as Muse") was Madonna's Louis Vuitton bunny ears. It's easy to forget that the Gala red carpet wasn't as ostentatious back in the day — the event was less of a mainstream cultural obsession, mostly attended by fashion insiders who weren't particularly interested in going viral. But Madge was an exception. In today's context, her ruched Playboy-esque outfit is about the level of wacky you'd expect to see on the first Monday in May… last decade, people were kind of confused.

Elsewhere at the 2009 Met Gala we saw Rihanna in Dolce & Gabbana, with that emo speak-to-the-manager haircut she rocked back then. It was her first public appearance since Chris Brown assaulted her, and she topped many Best Dressed lists. Also in attendance: multiple Trumps, Kate Moss in silver lame Marc Jacobs, Amber Rose holding hands with Kanye West, Anne Hathaway with a bouffant, and Katy Perry in one of her most normcore looks ever.

What else happened to celebrities this week in 2009? Amy Winehouse was hospitalized, Jon Gosselin denied having an affair, and Lindsay Lohan was interrogated at the Canadian border but eventually let into the country.

2009's was the first Met Gala to get the full Twitter treatment, and Leighton Meester was the surprise main topic of discussion. She wore a daring Louis Vuitton look that had everyone divided. Blair Waldorf in both a dress and pants? People couldn't handle it.

Leighton was trending for career reasons, too. Cobra Starship released "Good Girls Gone Bad," their iconic duet with the actress, on May 8. A "total poss summer anthem," according to Ryan Seacrest, who premiered the track.

The Game of Thrones pilot was still three years away, but HBO began casting this week ten years ago. Peter Dinklage was the first big announce. More TV: Jim and Pam almost eloped on The Office, Liz helped Jack search for his biological father on 30 Rock, Khloé decided to leave LA for New York on Keeping Up With the Kardashians, and Danny Gokey, Kris Allen, and Adam Lambert were the final three Idol contestants left. At the box office, Chris Pine starred in the new Star Trek reboot, which hit cinemas on May 7.

The United States equal marriage debate was heating up. Maine governor John Baldacci of Maine signed a bill legalizing same sex marriage on May 6, although it wouldn't come into effect until 2012.