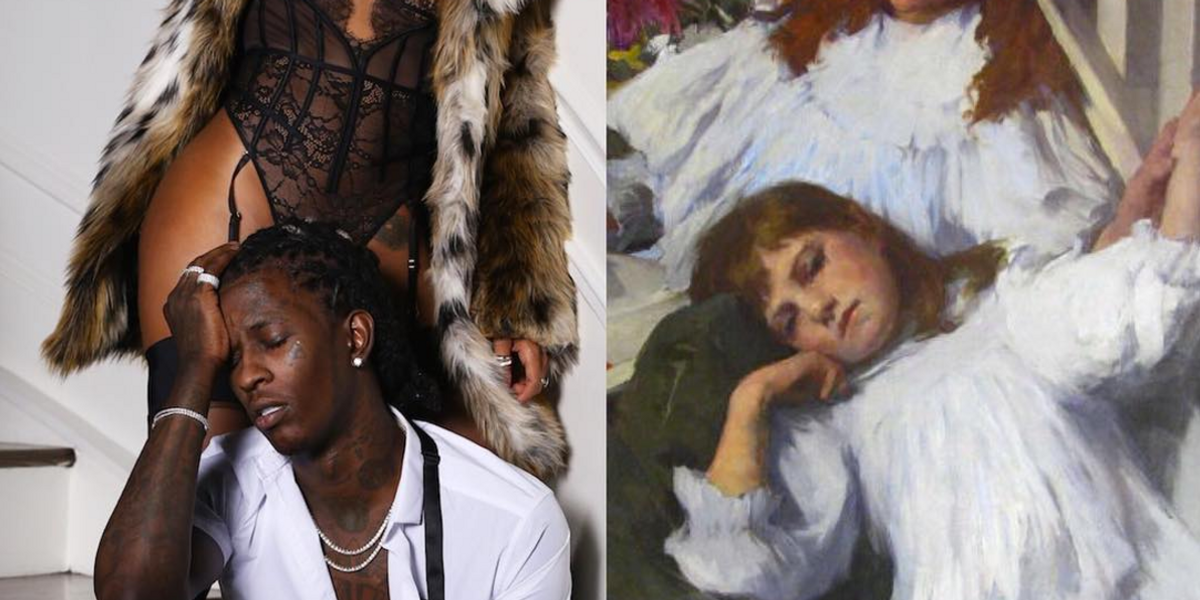 No one would deny that Jeffery Lamar Williams, AKA Young Thug, is art. From his critical sense of gender play to iconic sartorial looks to what he's capable of doing with his mouth alone, Thugger is a classic. And the Instagram account @youngthugaspaintings agrees.

Photography student Hajar Benjida compares pictures of Jeffrey to classic paintings, forming parallels in colors, form, and content. Vice's i-D sat down with Hajar to discuss what went into creating the 70+ side-by-side classic art comparisons that earned the account its nearly 30 thousand followers.

"It was a last minute school project idea. We had to go to a museum and be inspired by someone's way of working. I drew inspiration from this artist who researched thousands of selfies of other people, and based on that, he made the ultimate guide to the perfect selfie," Hajar told i-D. "I had so many photos of Young Thug on my phone, so I just looked through them all and found some combinations. I actually had no idea what to do for this assignment until I came up with this the night before class and presented my idea in a PowerPoint in the morning. It's the perfect combination of two of my favourite things: hip hop and classical art.

I was curious how other people (including Young Thug) would react to it and I was just trying to pass this class. His image compared next to the classic painting is like the version of a William-Adolphe Bouguereau that never existed in European art history."

PAPER's own shoot with Young Thug and Jerrika even made an appearance on the account (above).

Hajar said that Young Thug's label got in touch with her to do something similar for Migos, which should be out soon. Her goal, she says, is to one day work with Young Thug and shoot his album cover. She definitely has the eye for it.