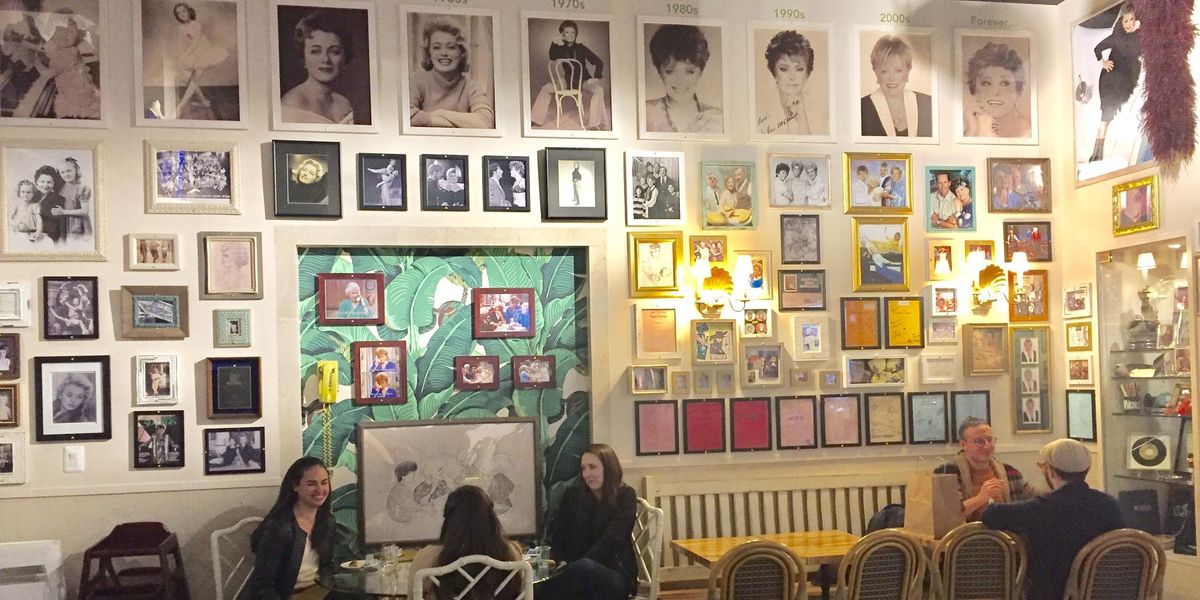 Take an Inside Peek at the New Golden Girls Cafe

I always dread November and December because that's when the Hallmark channel takes off its two-hour block of Golden Girls reruns and replaces it with holiday-related movies. The Golden Girls had holiday shows—they should just run those! Yes, I know the hit '80s sitcom still pops up on several other channels—like Betty White herself, it's unsquelchable—but I want it on all channels at all times, that's how soothing its wicked zingers and familial warmth are to me.

Second only to The Mary Tyler Moore Show, Golden Girls is, in my opinion, the greatest sitcom. The one with flawless casting, brilliant repartee, then-groundbreaking subject matter, and such cohesion that when Bea Arthur (the witheringly sarcastic Dorothy) left the show, it came back as Golden Palace, with Rue McClanahan (slutty Blanche), Betty White (naïve Rose), and Estelle Getty (crusty Sophia) and it seemed seriously lacking. A link in the golden chain had been broken so, eventually, GG reruns became the way to go—for the show's original fans, plus new generations catching on to its mature topics and wacky wit.

But now there's a new link in that Rue La Rue. A Golden Girls café has been previewing for several months at 4396 Broadway, way up on 188th Street. It's the pet project of McClanahan's friend La Rue (true story) and her son, Mark Bish, and it includes some of the memorabilia Rue herself kept as a big-time hoarder. As I learned on a visit there with friends last week, Rue's Emmy, costumes (including feather boas), and posters are all on display, along with leafy Golden Girls wallpaper, TV-studio-style track lights, and a bathroom door with various body parts sticking out of it (which our friendly server told us was taken directly from Rue's own home). The place is smallish and comfy, with only five tables, and in case there's not enough ambience to soak in, Golden Girls is on the TV at all times, so you can sit and watch your favorite episodes all over again. (Well, what did you expect, My Mother the Car?) When each episode starts, the theme song blares deafeningly, and then the volume settles down to more manageable levels, until the next episode begins.

The food consists of perfectly fine luncheonette counter-style eats. I had the pulled chicken sandwich with potato chips, a side salad, and a heaping slice of lemon meringue pie. Also on the menu are Sophia's 16-hour lasagna al forno ($12.75), Rue's high/low grilled cheese with dip ($7.75), the Rusty Anchor clam chowder ($7), and Clooney Caesar ($8). Yes, George Clooney was on an episode, and if you didn't know that, then why did you schlepp up to Washington Heights in the first place? Desserts also include sour cherry pie, Miami key lime pie, and naturally, several varieties of cheesecake. If you don't know what cheesecake has to do with the Golden Girls, again, then why….Oh, hell, just go up there and have some!

The whole thing seems like the café at a Golden Girls theme park, and it might work better in that context, but I still enjoyed the homeyness, the décor, and the off-the-beaten-path location. The server was SO friendly, he told us about a nearby gay bar and also a wooded park area where heavy duty gay cruising goes on. My friends and I didn't follow up on that advice—no, really—though there will surely be other trips uptown to explore the wonders of Washington Heights.

Even better, the guy told us that Betty White has agreed to do the ribbon cutting when the place officially opens. I joked, "I guess she wasn't at Bea's memorial, where Rue so generously announced that Bea called Bette the c-word." Ah, whatever. Grudges melt—along with cheese—in this place, where you feel like turning to the nearest person and singing, "Thank you for being a friend."

All photos by Chuck Attix.