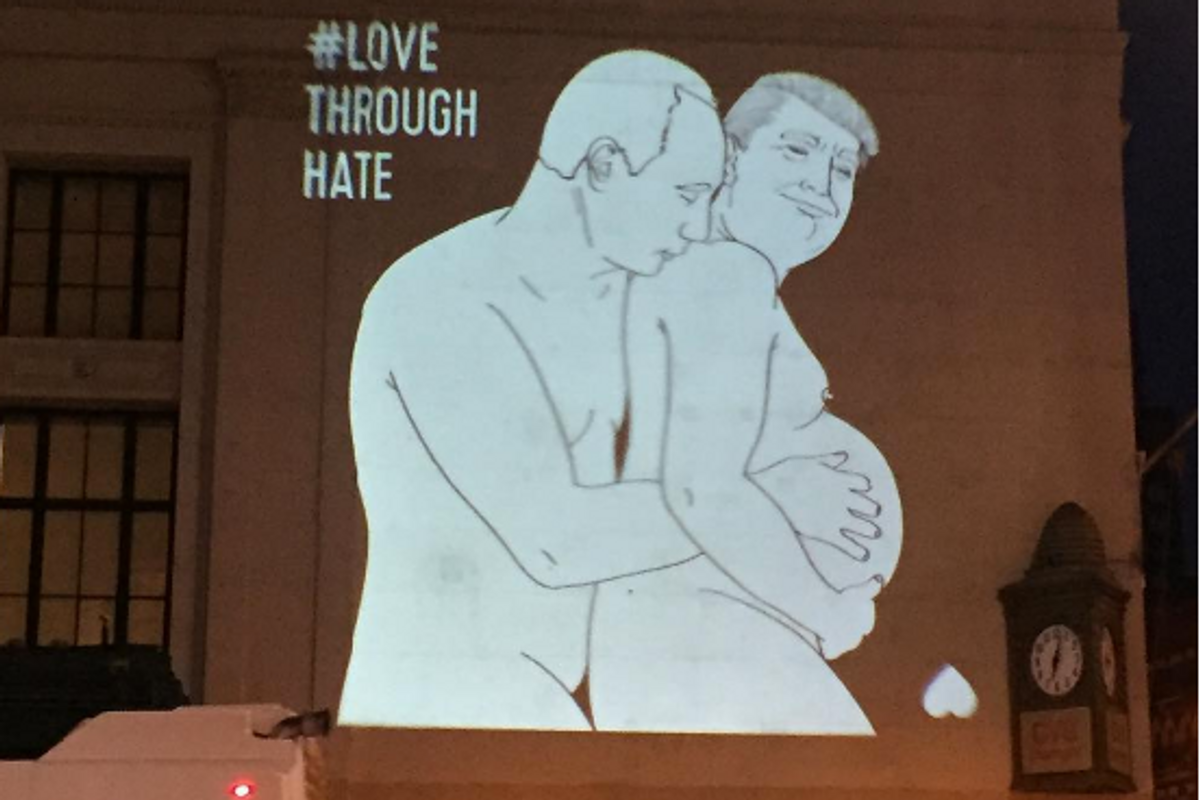 New York's #taken scene may have come out in full force last night to embody Valentine's Day goals, but the true crown –- the goalsiest of Valentine's Day Goals –- belonged to our nation's ultimate power couple, Donald Trump and Vladimir Putin. Ghostly apparitions of a lordly Russian Tzar cradling his Corporate American Maiden were mysteriously projected around the city last night with the tagline "#LoveThroughHate."

After all, what's says true love in our cyber-politico world than a giant nude light art installation of the (not-so) secret tender love between Vladimir Putin and Donald Trump?

But to whom do we express gratitude for this glorious image? I, for one, sink into my dreams wondering about Putin's whispered sweet nothings.

If you, like me, sleep a little better at night knowing that there is someone out there broadcasting the private moments of the Trump-Putin love affair just for the hell of it, you're in for disappointment. This was – like all things nowadays – a publicity stunt for yet another Tinder-esque dating app.

Hater is the latest entrant into the crowded dating app field (available now in beta on the App Store). It matches you with people who hate the same things that you do, subverting the traditional dating agenda of common interests. Finally, a place for the haters to vibe (at least, that's not Reddit).

Cool marketing strategies aside, there are real concerns here. A dating app for some innocent shit-talking can dissolve into an alt-right mess real fast (just ask 4chan or, for that matter, Twitter). The Hater is dealing with this by de-racializing/ de-otherizing the situation; according to the Insider, the app "does not allow hate speech of any kind on the platform. The topics do not include any racial, ethnic, or socioeconomic groups and all the topics are chosen by the Hater team, not by the users."

But hater topics still include the likes of Donald Trump and Barack Obama. And while finding even more people to hate on Trump with may sound like fun, grouping people into hate-based factions can have dangerous consequences in an already divided country...

But then again, maybe Hater will become the premier hookup app for hate-sex.