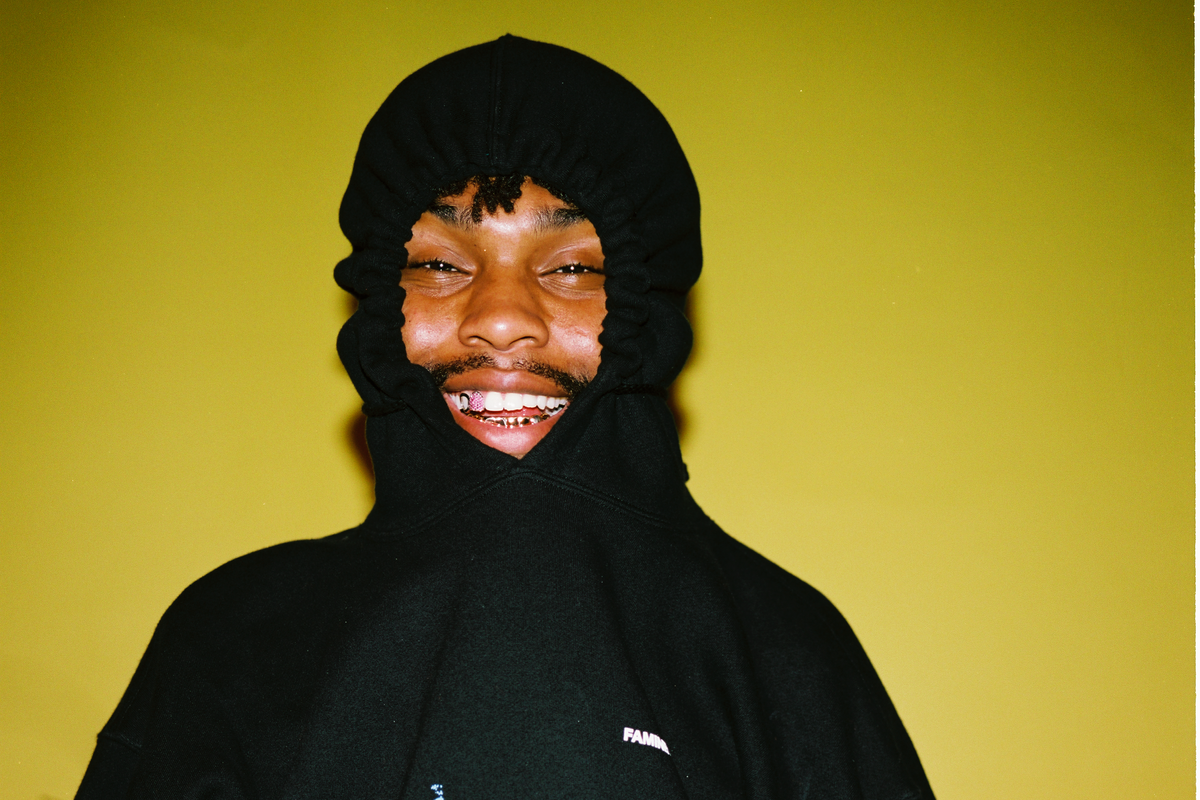 $not Is the Only One Still Having Fun

In 2017, rapper $not was charging 20 bucks for a guest verse. Three years later, he's signed to 300 Ent. and he doesn't have to do features anymore — let alone charge for them. He laughs over Zoom when asked about this tweet from 2017, when he announced to the world that he was seeking out people to pay for his voice on their songs. The 22-year-old rapper has no clue how that tweet resurfaced, and he sounds slightly sheepish as he explains why it came back up. "You can put in a phrase with my name or whatever," he says, laughing. "They must have been looking to find out how much my features cost. They saw that I'd tweeted $20 for a feature and they were just going crazy."

Born Edy Edouard, $not is that elusive rapper that you can't quite place, but you know that you've heard of him, probably for one of three reasons. First, he's almost never seen without a hoodie tied so tight that it looks like it cuts off blood circulation. This fashion statement has become his signature look. Second, Billie Eilish has given him an infinitely valuable cosign that, along with his song "Billy Boy" getting placed on the official Euphoria soundtrack, has unlocked a massive deluge of Gen Z fans to serve as soldiers in his stan army. And third, his music is formless and constantly morphing into Rorsarchs made of surging raps and delicate, earworm-y melodies. If you haven't heard "Gosha" or the recently released "Revenge," they'll be instantly familiar yet mysterious — probably because an 18-year-old was blasting them from their car speakers nearby and screaming the lyrics at the top of their lungs.

No matter how you heard of $not, his fandom is growing, especially with today's release of his video for "Mean" featuring Flo Milli, from his upcoming project Beautiful Havoc. Havoc comes hot on the heels of his debut mixtape Tragedy earlier this year, and listeners have been clamoring for it.

Beautiful Havoc is pensive, violent, and emotionally conflicted, attaching itself to the world of the past, the present, and the future. With its whirlwind of identities and feelings, it feels symbiotically connected to Tragedy. $not confirms that this connection isn't too far of a stretch. "After a tragedy in life, there's another, beautiful side to it," he says. "On here, I try to find the beautiful in every ugliness."

PAPER caught up with $not to talk about Beautiful Havoc, its recording process and what brings him happiness right now. That conversation, below, has been lightly edited for clarity.

You released Tragedy earlier this year, and now we have Beautiful Havoc. Why is it here so soon?

Because of the pandemic. I was going to go on tour for Tragedy, but then the whole fucking pandemic hit and fucked everything up. So, I said, "Fuck it. Drop another album."

How would you define Beautiful Havoc?

What was the creative process like for the project? Did you record the entire thing after Tragedy?

Yeah, mostly. I took a little break after Tragedy, but then I got in the studio and started making some new music. However, there are some old songs that are on the album too.

Did the pandemic have any impact on its creation?

Not really. I've been locked in the studio every day so I had to come up with a creative mindset to just think outside the box and try to just do shit. During the pandemic, there's nothing really to do. But the studio is open, as like an essential, so I just go there.

There are a lot of intense emotions on Beautiful Havoc. How are you coping with life right now?

I'm doing fine. You know, there are days when I'm down, but everybody has their ups and downs — we all just cope with it differently. Sometimes, for me, it's music to get shit off my chest, going for a walk, or talking to my friends.

What do you like to do that has been making you happy lately?

I like playing basketball and shit. Being around my friends. Driving my car or fucking around with it. Or really, just making music — if I'm motivated.

That brings me back to the album. What's your favorite song on it? Mine is "Sangria."

"I Don't Want To Die Tonight."It's a combination of me singing on the hook and then rapping on the verse. "Sincere" is another favorite. It's very uptempo.

"I Don't Want To Die Tonight" sounds like a very particular experience. Do you know what was going through your head as you were making it?

I've just been thinking outside the box when I'm in the booth. It's like I'm in a whole different world — like I'm on top of a mountain. That came from me trying to mix it up with my emotions.

For "Two Seater," that was interesting to me because it feels so different — like it was inspired by the early 2000s. Where did the idea for that song come from?

I like to try new shit out and my manager came to me with the beat, knowing that it's different for the type of style I usually do. I had to go crazy on it.

How did you connect with Flo Milli for "Mean?"

I heard her on a song that came on and I immediately thought that she was fire. She started trending and then I would see her name every day. Eventually, I'm like, "Yo, I got to check her out." I knew that I wanted to get her on one of my songs and then my manager went and made it happen. She's really good bro, it's crazy.

I saw a few months ago, you retweeted a tweet from 2017 where you were charging only $20 for a feature.

How is your life different now from back then?

It changed a lot. Back in the day, that $20 was a lot for some people. But I was just charging $20 and then everything flipped. Now, I barely do features. It's crazy that it came back up. Somebody must have been scrolling all the way down. somebody just be going all the way down. You can put in a phrase with my name or whatever. They must have been looking to find out how much my features cost. They saw that I'd tweeted $20 for a feature and they were just going crazy.

What is Beautiful Havoc going to tell fans about you?

I think people can listen to it and they could take it for whatever. They can say this is my best album, worst, whatever. Whatever they want, as long as they feel some way about it.