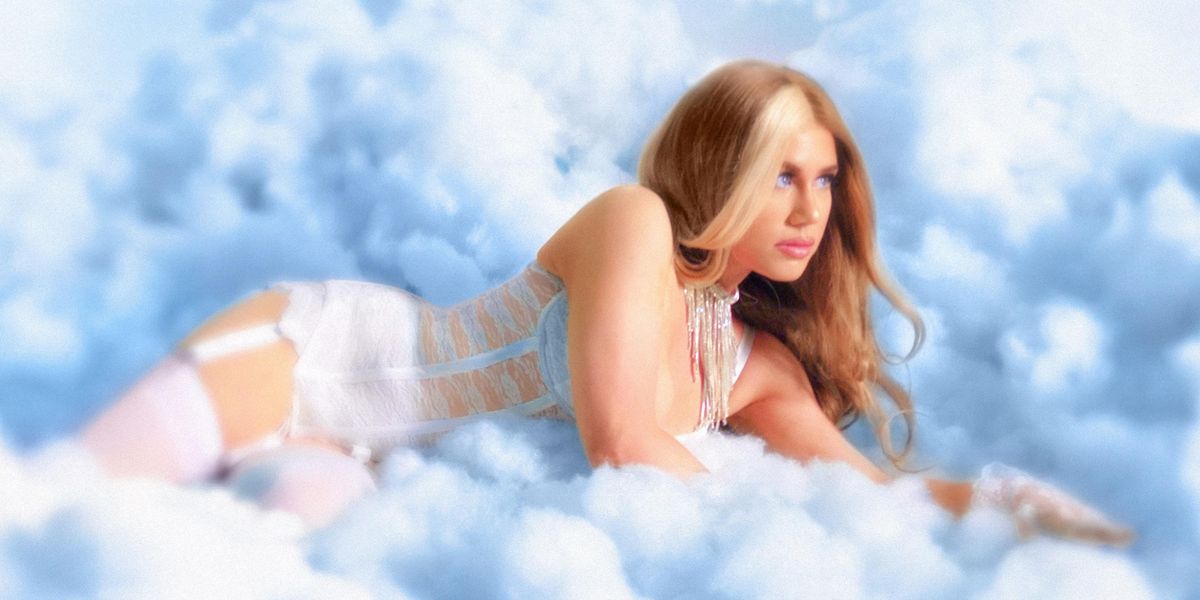 Fresh off the release of Slayyyter's album title track, "Troubled Paradise," the internet's pop star is back today with "Clouds," a more low-key and dreamy house single that doubles down on the project's melancholy perspective. "Am I unhappier than I've ever been?," she asks on the glittery chorus, later making the honest admission: "Some days I feel good, then I really wanna disappear."

The music video is directed by Munachi Osegbu, who captured Slayyyter inside her troubled paradise — alone, high in the sky, where she lays on a bed of clouds like the daughter of Katy Perry's Teenage Dream. This is the first of the visual's surreal environments, juxtaposing Slayyyter's sadness against a world that, on its surface, appears to be beautiful and easy.

Whether she's in a pretty field of flowers (a la Dorothy in The Wizard of Oz) or at a colorful dinner party with people dancing happily around her, Slayyyter still wrestles with her inner demons and mental health. "I wish they knew what goes on in my head," she sings, wanting to wash away reality with another drink. "Sometimes feels like I'd be better off... dead."

i remember getting the demo beat for clouds from nicopop during earlyyy quarantine and writing it so fast. i felt s… https://t.co/Gdtk1s7RS7
— miss yyy (@miss yyy)1614318770.0

"i remember getting the demo beat for clouds from nicopop during earlyyy quarantine and writing it so fast," Slayyyter Tweeted today, explaining the track's production process. "I felt so depressed and like i didnt belong in music. recorded 90% of the vocals myself in my airbnb and i think it is one of my favorites off the album."

To celebrate "Clouds" and Troubled Paradise, which also features previously released singles "Self Destruct" and "Throatzillaaa," Slayyyter created her own sweet confection: blueberry cotton candy with an "extremely limited number available." Mimicking her single artwork and overall album mood, the candy is a shade of blue and available online for $15.

Stream "Clouds" by Slayyyter, below, ahead of the release of Troubled Paradise on June 11th via FADER label.