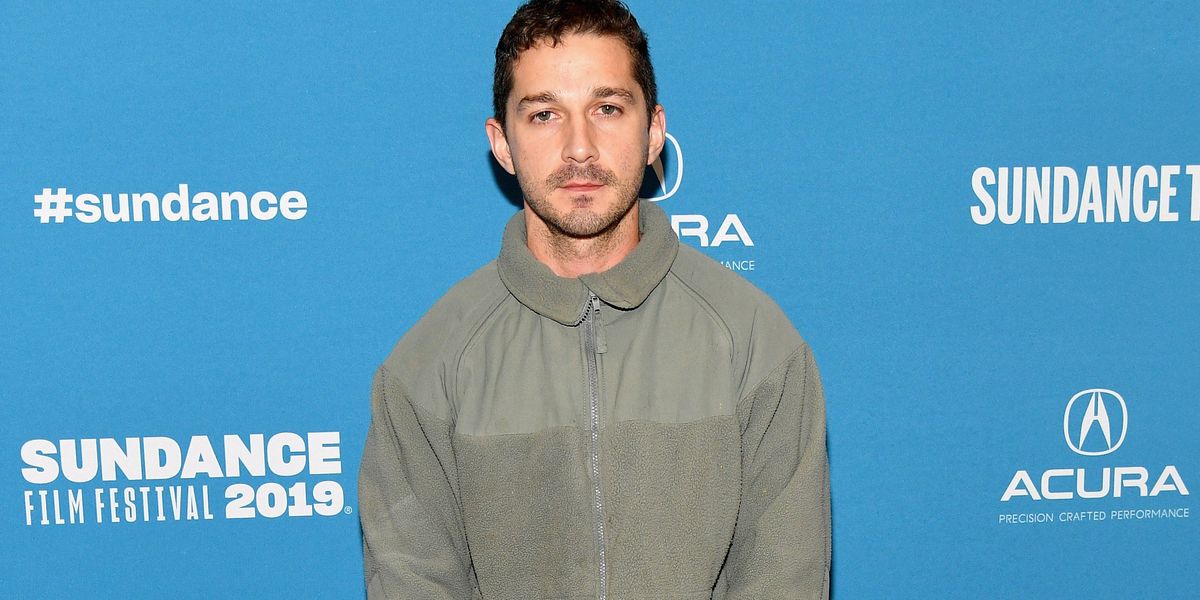 On Friday night, Shia LaBeouf premiered his autobiographical memoir Honey Boy at the Sundance Film Festival. And it seems that his very first screenplay was a certified hit, as he was greeted with a standing ovation at the end of the film's showing at the Eccles Theater in Park City, Utah.

The film, which LaBeouf wrote after one of his recent trips to rehab, tells the story of the actor's life from his 2000s Disney Even Steven days. It also puts a huge focus on his relationship with his estranged father. "It's strange to fetishize your pain and make a product out of it," LaBeouf said onstage at the Eccles Theater. "And you feel guilty about that. It felt very selfish. This whole thing felt very selfish. I never went into this thinking, 'Oh let me f—ing help people.' That wasn't my goal. I was falling apart."

LaBeouf plays his father in the film, but of course took the liberty to change names. And so he plays James Lort, who was an alcoholic. The teen actor who plays the young LaBeouf in fictional form is Noah Jupe, while Lucas Hedges plays the full-grown adult Otis Lort. LaBeouf's friend, documentarian Alma Har'el, directed Honey Boy as her first narrative feature. And in a video interview with the Hollywood Reporter, Har'el reveals that during filming her dear friend was "literally entering his childhood trauma."

Shia LaBeouf sent @Almaharel the script for #HoneyBoy — a film based on his childhood and his relationship with his father — while he was in rehab.

While filming, he was "literally entering his childhood trauma." #THRSundance pic.twitter.com/aHQZa2CSMW

Of course, the actor couldn't get through the Q&A without a question about his current relationship with his father Jeffrey Craig LaBeaouf. "Previous to this, me and my father hadn't spoken in six, seven years," LaBeouf said. "We're talking now."

So far, reviews for the film are looking promising. People were wowed by the performances by Jupe, Hedges, and LaBeouf himself. It also seems that the script and story are true tear-jerkers. And while it's still seeking distribution at the Sundance Film Festival, Variety predicts it will be one of the "more commercial prospects" this year.

#HoneyBoy is... very, very good. I am shocked by how much I loved it. Shia’s screenplay is fantastic, as is his performance.

HONEY BOY - A terrific film with phenomenal performances all around. Alma Har'el directs the hell out of it and Shia LaBeouf poured his heart and soul into this screenplay. A beautiful & powerful tale of addiction & forgiveness. Noah Jupe deserves an Oscar. #HoneyBoy #Sundance pic.twitter.com/TTiC99JizJ

I saw inside Shia LaBeouf’s private world in #HoneyBoy and had tears in my eyes the whole time. A poetic masterpiece by @Almaharel

While #HoneyBoy is a slow burn, the performances are electrifying and it vibrates with passion, honesty, and authenticity. #ShiaLaBoeuf has never been better. #LucasHedges builds further upon an already impressive career. #NoahJupe proves he is here to stay. #sundance