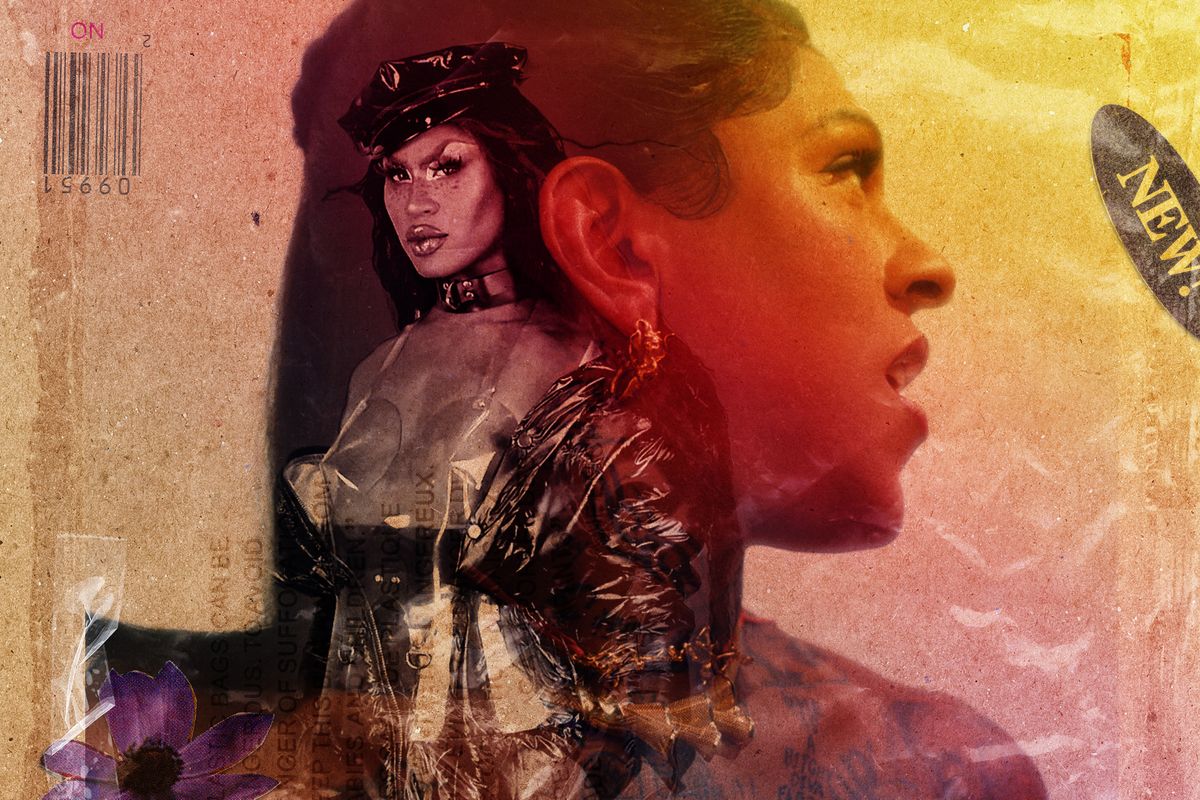 During the season premiere of RuPaul's Drag Race All Stars last month, Shea Couleé gave the audience a taste of a brand new single. "Collide" is a sultry club bop, and it features a bouncing verse from none other than iconic rapper and poet Mykki Blanco. Her many fans are already hoping that Shea will get to perform it in full when she's crowned season five winner, hopefully with Mykki making a surprise appearance.

Now that the song has dropped, we thought we'd get the two faves together on a call to learn more about their collaboration. But what actually happened was way more candid. The two stars also discussed the huge cultural impact of ESSENCE magazine, Eurocentric beauty standards in drag and the emotional labor that comes with helping white people understand that racism is real.

The chat begins with Mykki sharing how it feels to engage with content surrounding brutality against Black people on a regular basis.

Mykki Blanco: There's a certain draining of my energy that happens when I engage with [brutality] constantly. I've become exhausted in this way. Like, I'm not surprised. I go 15 years without dealing with this beyond a certain level, and now I'm deep on websites and understanding legislation and policy reform. While it's important to me to continue to educate myself, I think about how I could be learning. And then I can take a period of silence and learning, and then come back and talk about other things that really affect us, like the fact that there's poor nutrition in Black neighborhoods, nutritional racism, how people don't even understand the way that neighborhoods and urban planning works — the stuff that gets me hype. Let me actually be quiet and read for like two months and then maybe come back more informed [rather] than continuing to reenact the brutality.

Like, I'm following Dr. Ayana Johnson. She talks about the connection between ecology and racism — she's a Marine biologist. I want to digest some stuff, so on my platform I can not be as reactionary and then actually talk about stuff that I care about. It's tricky, though. I bet Shea is feeling this so hardcore right now because they're on TV. How has it been juggling this moment in the spotlight?

Shea Couleé: It's weird because I feel like last time [on Drag Race], I was really concerned about the way that I would come across to people. Then with everything that's been happening, I realized that, how we had the conversation earlier of having to be palatable, because at the end of the day, I'm competing in this reality competition where a lot of the people that are calling the shots are white men. But my duty to myself and my duty to my people extends beyond that. I will celebrate myself, I will celebrate my successes as a Black person and an artist, and I will put my shit out there, but at the same time there will be swipes where it's coded information because I want you guys to see that too.

I used to worry about the grid, and how these things were appearing, and aesthetics, and now, I'm just throwing all that caution to the wind. Now [I] just say, just be authentic and just be smart and think about how I can use my platform to amplify the voices of other Black people, specifically Black trans women.

Mykki: You know what I really admire about what you do as far as the aesthetic, is that it never, to me, gives Eurocentricism. Like, I definitely feel "American woman," but I don't feel like, "Okay, they're doing the Eurocentric [look.]" It's so much more than blonde, but it's about how defined is the girls' contour, you know, like all that tea. I feel like you never played into that. And people notice that, even if it's a subliminal.

Shea: Yeah, [it's what I] always grew up with. I appreciate that my parents were always trying to fill our house with images of beautiful Black people in art. Cause, of course, I grew up in the suburbs and being at friends' houses and [seeing] Eurocentric beauty standards and all these magazines. Then you go to our house and it was ESSENCE, it was Jet, very much seeing Black people succeed. Also, being a child of the '90s, it was so important because there was a lot of Black TV, from Sister, Sister to Moesha to The Parkers. That was so much of what I watched. I mean, even a Nickelodeon with the cast of All That, like the diversity that was there. I got the pleasure to have all these amazing examples and I just always tried to reflect that in drag, you know?

I'm an editor at ESSENCE and I often think about what my life would be like had I not been exposed to those wonderful images of Black women as a young girl.

Shea: And I mean, just to shout out ESSENCE specifically, as a child, and also a gay child who loved fashion, ESSENCE, to me, was the one that really was putting out fashion editorials, putting out style, putting out aesthetics. There are so many impactful images that came through ESSENCE Magazine.

All of those Mary J. Blige covers! The way she looked... just wow. But to tie back into what you were saying about using your platform, have you had a lot of white people who hit you up like, "Hey, I'm so sorry. What can I do to help?" or "Educate me?" What do those conversations look like?

Shea: Let them deal. A lot of times I've heard, "Please educate me." I'm like, "I'm not here to be teaching any of that. You want to do something, you go out there." And I'm like, "You can literally Google, "How to be a good ally." We have smartphones. If you want something, there's an app for it. Anything that you want, you can make it happen with a smartphone in [your] hand. So why are you wasting your time coming to me to provide you with the resources? They're right there. I don't know what it is, why I need to do that first step for you to just do it.

Mykki: There's never been an easier time to be an ally. If you want the blueprint to your paradigm shift, there they are. People haven't come to me like that, but I don't know. People think I'm always more... I'm very, very not aggressive in real life, but people always think that, "Maybe I shouldn't message Mykki that." So I don't get that many messages like that.

"I'm so happy that everybody is just like, 'White guilt? No, we don't have time for it.'" —Mykki Blanco

The ability to be able to go to a Black person and be like, "What can I do?," is a form of privilege in and of itself, because it's like, you're really not invested in doing the work. You want somebody else to do it for you, or you want them to gently guide you. That is a part of the issue. You want me to continue doing labor for you, when I'm telling you that I've been doing it for a minute.

Shea: I just want to sit on my couch, eat some Hot Fries and watch How to Get Away with Murder. I don't want to do this for you.

Yeah, exactly. It's extra labor. And the fact that certain people even feel entitled to receive an answer is like, why?

Right now I'm trying to unlearn this [unarmed] language, because it doesn't matter if they were armed or not. I've been catching myself lately because somebody was like, "Mykki, you should consider thinking about rethinking your language around 'unarmed' and 'armed' because of this and this and that." I'm like, "Okay, let me sit with that." You know?

Shea: No, I agree. It all kind of boils down to that language that's oftentimes used to help justify whether or not it was right for them to be killed, when it shouldn't have even happened in the first place.