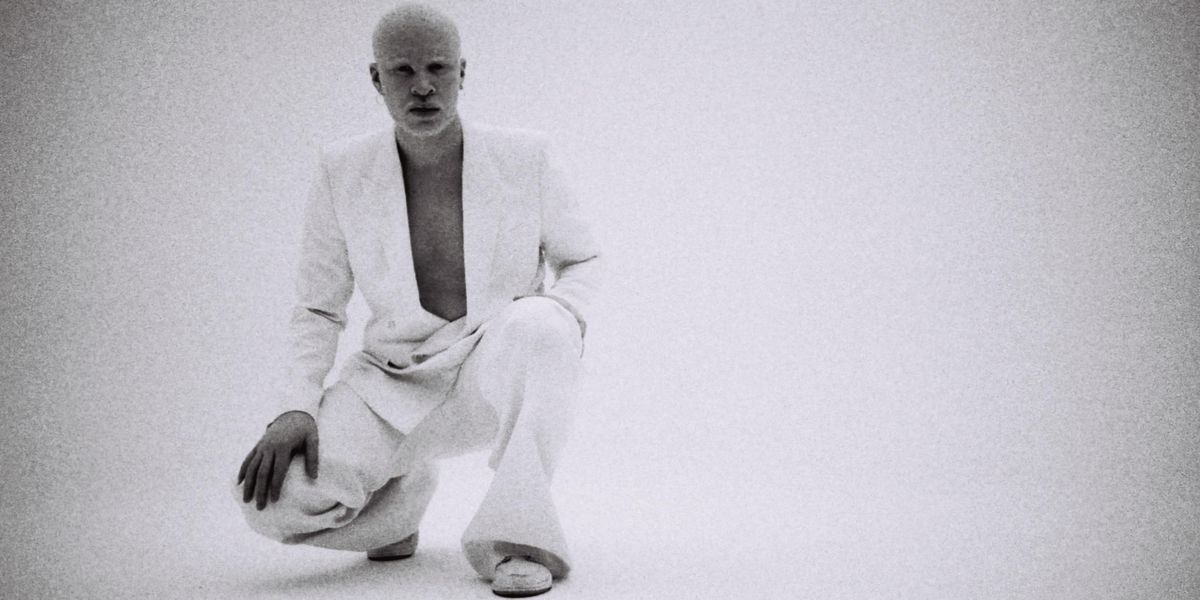 Considered the first Black male model with albinism to break into high end fashion, Shaun Ross was scouted at just 16 years old. The young Bronx-native quickly caught the eyes of almost every major fashion house and magazine of the time (including PAPER), and became a mainstay of Fashion Week runways and street style photography worldwide.

But while his work in fashion is extensive — heading campaigns for H&M and Kenneth Cole, walking for Pyer Moss, spreads in international editions of Vogue, legendary accolades like Naomi Campbell — Ross has also been intimately involved in the music scene. From acting as the muse in music videos like Katy Perry's "E.T.," Lana Del Rey's "Tropico" and Beyoncé's "Pretty Hurts," to featuring Lizzo herself on his debut single "Symmetry" back in 2017, Ross has been making moves in music for more than a decade. Now, after a decade of building creative relationships across America, Ross is ready to debut his first full length album, SHIFT.

Taking cues from artists new and old, SHIFT shows off both Ross' vocal range and his breadth of musical knowledge. Flecks from decades past tinge SHIFT with a sense of nostalgia for disco, R&B and the classic crooners of the early 20th century. At times soft and lovely, at times soaring and strong, Ross' vocals have a knack for emotive sounds, with lyrics garnered from his life experience. Still, SHIFT's sonic impression is decidedly new and fresh; on tracks like the self-affirming bop "CREAM," or the liltingly dreamy "SIMPLE," Ross and his producers at JEX Records have created tunes that cement SHIFT in the 21st century (fans of dream pop and alternative electronica from the likes of Washed Out or Flying Lotus will be quite pleased with much of SHIFT).

Ever a contemporary artist, Ross seems keen to keep his new album dancing on the pulse of our nation; for the opening and closing tracks, "SHIFT 1" and SHIFT 2," respectively, Ross tapped Philadelphia-based Black female poet Ursula Rucker for two spoken word pieces, bookending SHIFT. We hear Rucker's unwavering voice recite prose over thrumming background beats, her words reflecting the monumental shift in awareness our world has recently awakened into. Her poetry elevates the album accordingly, and pulls together the work into a beautiful, cohesive package of magical modern music. SHIFT is truly deserving of multiple sit-through listens.

We sat down with Ross via a Zoom call from LA, a city he has called his home for the past six years, to discuss SHIFT, his thoughts on the pandemic, turning 30 later this month and how he's now using music — not necessarily fashion — to explore his inner child and bright future.

Hi Shaun! First things first: how have you been during COVID and lockdowns and all that?

I've been good, but I think that a lot of us needed this time. It's been a shifting moment for our lives, collectively. I feel like we were all living on autopilot for a long time. And maybe we weren't paying attention. It's sad that it had to take lives. George Floyd and Breonna Taylor and everybody else... they had to tragically lose their lives. But in the same breath, I will also say, we needed to wake up. In many ways, we needed this. At least I know for myself, it really opened my eyes about my own life. I think it was such a pivotal moment, especially because I'm about to turn 30, I feel like I now have a better understanding of how to go through this life with truer intentions. And maybe everyone else does too.

Indeed. Do you think the COVID pause gave you some time to focus on the album and time to fine tune things?

Absolutely. It definitely gave me time to sit down and actually perfect everything I was working on. Plus, getting a great team behind me was also really important, and being in quarantine gave me time to research who's the best for that too. So I feel ready.

So let's get to SHIFT. It's fantastic!

I appreciate that, thank you so much.

How long has it been in the making?

SHIFT has been in the making for at least the past two years. I had been involved in music for years, and I tried to put out a project before this, but it didn't really go the way that I would have hoped it went. But SHIFT came together beautifully, like it was meant to be. I worked with a lot of different writers for it. Michael Tritter, Rush Davis. And of course the folks at JEX Records. I tried to keep it tight knit, in the family, because I wanted the DNA to stay strong. Sometimes I don't know how people actually work, and I needed people I really knew. So keeping it small gives the album a certain sound. I guess I just love a cohesive project!

Who are some of your musical inspirations, past and present?

Growing up, I listened to people like Donny Hathaway, Stevie Wonder, and definitely Maxwell. I also love Jamiroquai, Moby, Moses Sumney, Serpentwithfeet, Vincent. Björk of course. Robert Glasper, Laila Hathaway. And literally all of those artists that I just listed, that's who I listened to growing up, and I love them to this day. My parents were playing Björk records when I was like seven years old.

This may sound cliché, but why release SHIFT now?

It just felt like time. I mean, I had been working in fashion for a long time, and I just felt like I wanted something new. I feel like fashion is cool, if you're not a part of it. But sometimes I also feel like fashion, in a way, loses its evolution. Fashion is something different from when I started in the industry. And hearing from others who came before me, like Veronica Webb or Tyson Beckford or Naomi, I know it's changed even more than I know. With social media and everything else, it's changed dramatically. So pursuing music feels more like me right now.

Oh my god, yes! Ursula is such a talent. I've been a fan of hers since I was like 15 years old, literally. I used to stalk her on Twitter. The album was actually already done when we reached out to get her involved. It was just crazy, because I wanted a good interlude, something different and powerful that fit seamlessly into SHIFT. And when she said yes, it was beyond. Of course the pandemic was happening and we obviously couldn't get in a proper session. So the interludes that you hear are actually voice memos off of an iPhone. And she still made it sound that good. She's phenomenal. Her voice is haunting and powerful in the best way.

This is your first album, and therefore your first piece of published musical art. How are you hoping people receive this work?

I hope they receive it well, but at the same time, I'm not looking for that validation. I've wanted to do this for a while now, create something musically that people could hold on to and resonate with. I wanted to put a piece of work out into the world that when people think of Sean Ross, as a musician, this is what they think of first.

As a queer person of color, you've undoubtedly been asked to present as more "masculine" or "straight" for modeling jobs, even being as high-profile as you are. Do you see your music, and SHIFT, as a way to break free from toxic masculinity?

I'm trying to tap into my younger feelings with more discernment as an adult. I'm trying to find a mature version of a younger version of myself. When it comes to music, for me, it's about playing with different moments in time, playing with different colors, different emotions. Sometimes I can be very feminine, sometimes very masculine. Sometimes I feel very in between. And sometimes I feel completely... otherworldly. And my music reflects that and allows me to be that way. To be very honest with you, as an artist, and especially as a Black gay man, it was important to me that I make music that doesn't make you think about my sexuality first. I very rarely use sex as a writing tool, and that's on purpose. I think sometimes the more you put parameters like that into your music, the less "for everybody" the music really is. And that's the opposite of what I wanted for SHIFT listeners. I want everyone to feel comfortable listening to it! I would call my music unisex in its approach, and certainly anti-toxic masculinity.

I think Björk would be proud!

You know what? Same!

You've been involved in social justice and diversity advocacy for many years, something that has become de rigueur for public figures in 2021. Do you see yourself as a forerunner?

I mean, yes and no. I hate the term social media influencer. I feel like my influence is timeless and I will continue to influence. For things like TikTok, that just seems like instant gratification to me. Like, you make a 15 second video to grab someone's attention and now you're a big deal? Seems… cheap. But I also think it depends on who the person is. TikTok can be cool and informative, but sometimes it's just a bunch of people doing dances… and sometimes done to look like they are using American Sign Language, even though they are not actually. That, for example, is not good. I wish the people on TikTok would use their platforms more to help and educate. Like, learn how to actually do things, ya know? It's why I featured actual ASL in my video for "YOU CARE." There are millions of people out there who speak ASL. It would help the world a lot if some of us actually tried to learn it, rather than using it incorrectly for TikTok clout.

Agreed. Well, now that COVID restrictions are lifting a bit, and life is getting back to a semblance of normalcy, are you thinking of touring to support the album?

Yes, I would love to! I love performing live, and I really miss people. I have no plans to announce on that front just yet, but as things improve further I'm sure we'll put something together.

And if you could have one person make a surprise appearance for the inevitable SHIFT tour, who would it be?