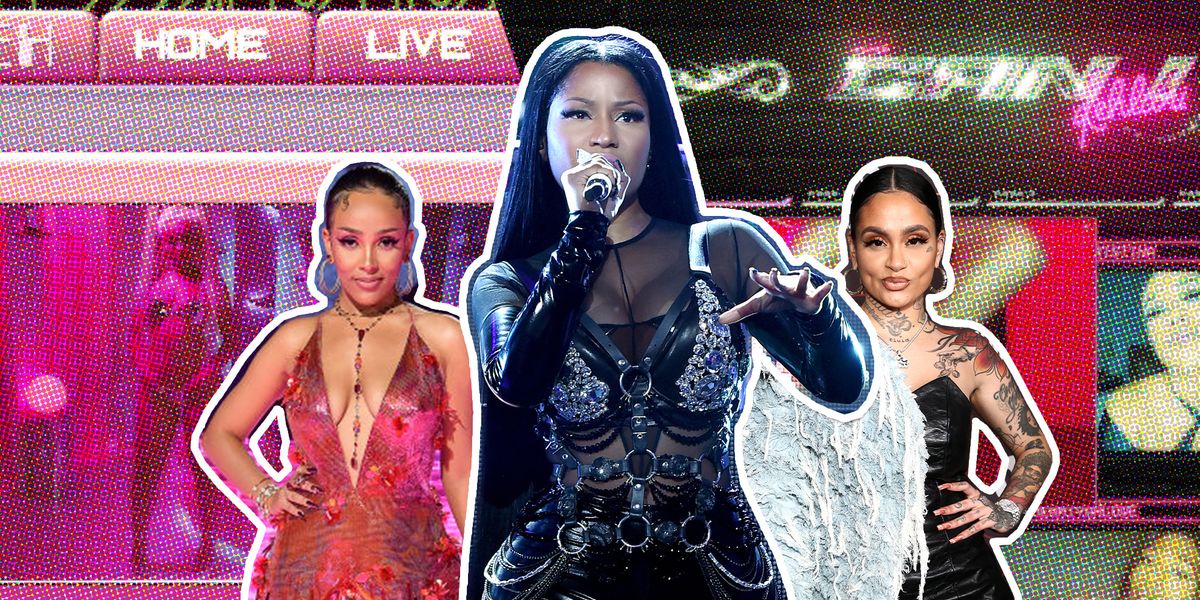 If there's anyone taking creative control during quarantine, it's Kehlani.

The singer even made sure to note on her instagram the importance of supporting sex workers with this heartfelt message: "support sex workers!!!! ESPECIALLY BLACK TRANS SEX WORKERS. the most vulnerable. sex workers deserve proper pay, protection, and to exist in their careers without consistent shame & violence."

Women artists have been profiting off of selling sex appeal and what some might call sex worker aesthetics for decades. Recent chart hits from Doja Cat's "Cybersex" to Cardi B and Megan Thee Stallion's "WAP" revel in female sexual autonomy and freedom. (While women artists have always sung and rapped about sex, male rappers have always employed video vixens to star in their sexually charged visuals that heavily borrow from the sex worker aesthetic as well.)

But Kehlani aside, it's rare to see women artists publicly stand with real life sex workers. In fact, they often speak out against them. Instead of receiving support for their profession, sex workers — especially those that are Black, disabled and trans — are often met with ridicule in the punchlines of rap songs by women who themselves have garnered a following based on music that sells a certain type of sex.

There's multiple layers of irony at work when Nicki Minaj raps about sexual liberation, including the ironically-titled "Rich Sex," but in the same breath condemns those may actually have sex for money. "I didn't realize how many girls were modern-day prostitutes," she once told Elle. "Whether you're a stripper, or whether you're an Instagram girl — these girls are so beautiful and they have so much to offer. But I started finding out that you give them a couple thousand dollars, and you can have sex with them. I was like, 'Yikes."

Minaj was attempting to take accountability for her role in the selling of sex appeal machine that controls the music industry, but the message gets lost and comes off as whorephobic, hating and demeaning sexually active people who are oftentimes going to be sex workers.

The degradation doesn't stop there. In her hit single "My Type," rapper Saweetie ridicules women who sleep with me to get their rent paid in the midst of a song where she explicitly says she only dates men with money: "You the type that's f*ckin' for the rent (you a th*t) / All on another n*gga d*ck (on the d*ck)."

The urge for rappers to distinguish themselves from working women runs deep. On her debut album, Cardi B, a former stripper from New York, made sure to note that she never sold vagina to make a dollar: "They gave a b*tch two options: strippin' or lose / Used to dance in a club right across from my school / I said "dance" not "fuck", don't get it confused."

What's most confusing about Cardi trying to clarify her position on the sex worker totem poll is that stripping is a form of sex work. Why does she then feel the need to shame those women who might sell sex and strip?

The trend of women entertainers borrowing heavily from the hoe aesthetic while playing into respectability politics isn't new. In a 2009 article for the Journal of Black Studies, academic Matthew Oware presents the argument that even though rap provides an escape for marginalized and oppressed groups, like Black women, there are very "high numbers of female self-objectification, self-exploitation, and derogatory and demeaning lyrics about women in general." Oware reasons that when women rappers degrade and belittle other women, that nullifies the empowering message and upholds male notions of what a "good woman" is.

When women entertainers take part in the shaming and devaluing of legitimate work, it creates even more barriers for sex workers to establish safe spaces to talk openly about their work. Many of us will never understand what it means to risk jail everyday for simply trying to survive, so why in turn are we so quick to minimize their personhood?

2020 will forever be remembered as the year women in rap ran the singles, albums and streaming charts. It's been a celebration of women empowerment everywhere we look. At the height of so much female supremacy, it's worth noting that many entertainers continue to dismiss certain women that don't fit the purity politics mold from such empowerment.

If so many women rappers continue to affirm their music is meant to uplift all women, that should include the very women that laid the sexually liberated blueprint we all have the choice of following today.