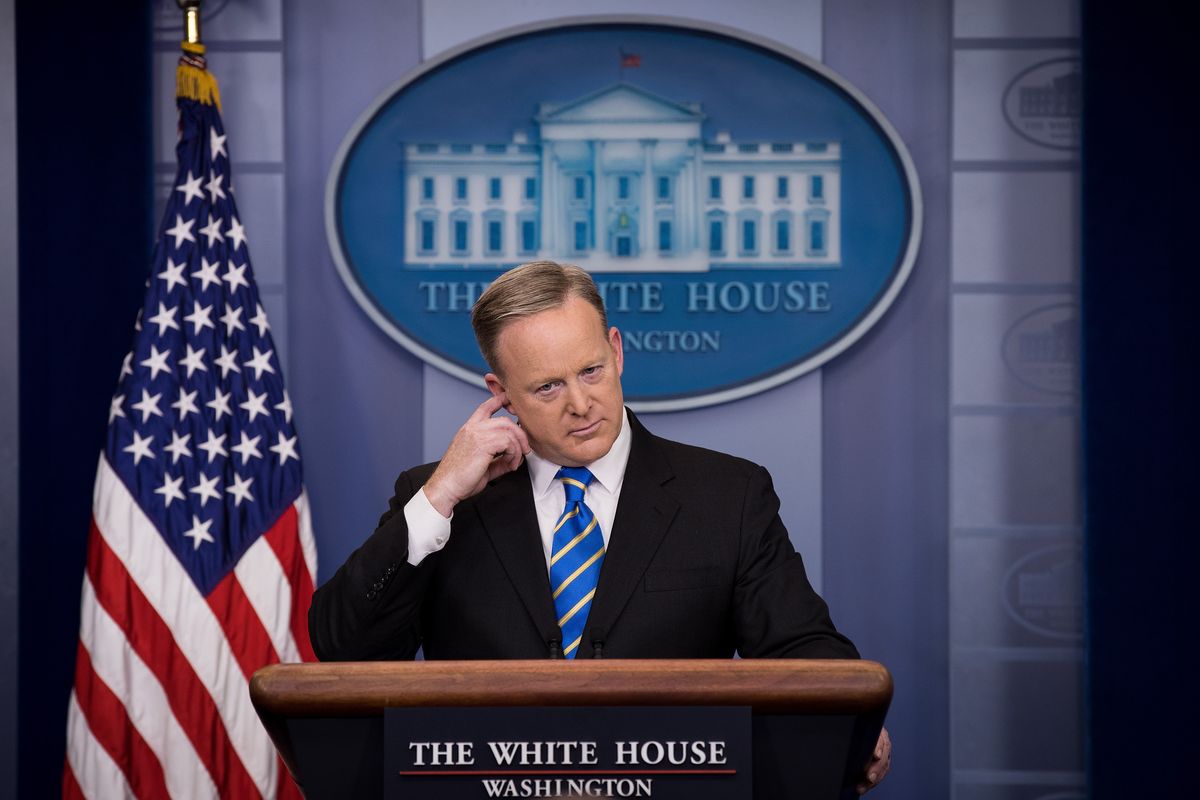 Sarah Huckabee Sanders, who has been filling in for Sean Spicer the past few weeks while he's been attending to Naval Reserve duty and avoiding everyone, will take on the role of White House press secretary. In her first press conference, she jumped right into the noble job of defending Trump, saying "we are focused on repealing and replacing Obamacare" and adding that Anthony Scaramucci was appointed to be the communications chief because, "He's been a loyal supporter of the president, he's somebody who has come from nothing...and is one of the most successful and smart people that he could put on his team."

In what might be the best decision he's made in his life up until this point, Sean Spicer has officially resigned from being the White House Press Secretary, six months and one day into his role as one of Donald Trump's most loyal foot soldiers.

Spicer announced his resignation today after opposing the president's appointment of transition official and Wall Street personality Anthony "Mooch" Scaramucci as the White House communications director. A source informed NBC News that Spicer told people last night he would resign if Scaramucci were appointed, and it was announced this morning that Scaramucci had accepted Trump's offer to be his new human shield from the press.

The Daily Beast reports that senior officials worry Scaramucci's hiring will perpetuate the notion that it's "amateur hour" in the West Wing, and a CNN report says Spicer worried that due to Scaramucci's inexperience with Washington, he would have ended up doing both jobs. Now, he will be doing nothing. Good call, Spice. Really.

Spicey has been on the chopping block for a few weeks now, with Sarah Huckabee Sanders filling in for him in past months amidst increasing reports that Trump wasn't pleased with his performance as press secretary. A White House official reportedly told the Daily Beast that they were just "surprised it took this long" for Spicer to leave.

From his first day on the job berating the press for their depiction of Trump's inauguration crowd as significantly smaller than Obama's, Spicer had several missteps in his role and was frequently berated and mocked by both the public and the administration. Melissa McCarthy's infamous spoof of Spicer on SNL didn't help him keep a low profile, either:

Even as press secretary, a job which entails speaking in front of the press everyday, Spicer sometimes struggled with words (don't we all, though?):

Spicer reportedly isn't the only one who wasn't happy with Mooch's appointment. Sources told NBC News that White House chief of staff Reince Priebus, with whom Spicer is close, has objections to Mooch's hiring, though Priebus told the AP today that he supports Scaramucci "100 percent."

Though this latest development in the on-going White House circus seems like one move closer in the administration's dance to its own death, we will admittedly miss the memes, the made up words, and dare we say, the alternative facts.

Pour one out for Spicey's short-lived career, but don't feel too bad for him. He can always go back to being the White House Easter Bunny, a position that requires no speaking at all.