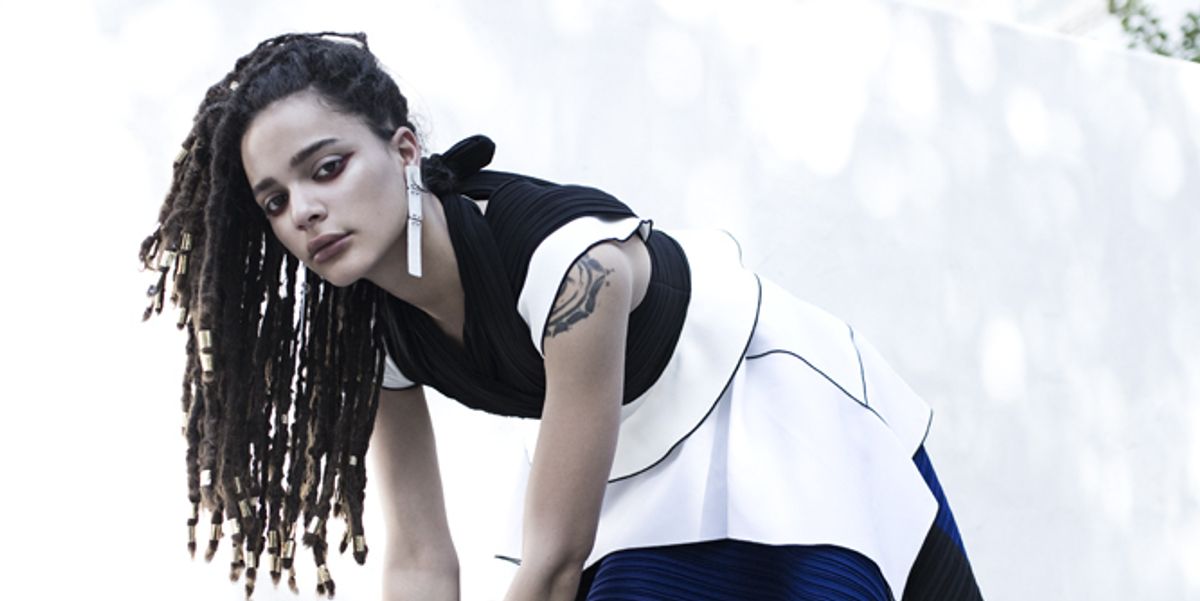 Life in the Sasha Lane

The American Honey star is on the fast track to Hollywood fame.

Sasha Lane had what you might call a year. After British filmmaker Andrea Arnold discovered her in 2015 on a Miami beach while Lane was on spring break, she landed the lead role in Arnold's acclaimed indie film American Honey. Starring alongside Shia LaBeouf and Riley Keough, the now 21-year-old captivated critics and fans alike with a nuanced performance, playing a young woman who joins a wild crew of teens traveling the country to sell magazine subscriptions. She went on to earn an Independent Spirit Award nomination and a Best Actress trophy at the British Independent Film Awards, catching the eye of the fashion world in the process; she became one of the faces of Louis Vuitton's 2017 campaign earlier this year.

Lane is the first to admit that making the film altered her life course in ways she couldn't possibly imagine going into it. "I didn't have a clue what it would feel like," she says. "But it still is with me. It still is with a lot of people. It was such a beautiful experience, but it was also very wild and very emotional and took a lot of energy. A lot was on my shoulders." When shooting wrapped, Lane says she even had trouble returning to her life back in her native Houston because she missed the crew and her castmates so much. She says, "I couldn't really do anything besides want to hear them and be around them and do everything we did," she says. "I wouldn't unpack my bags. I just refused to sit and settle."

She eventually did unpack those bags and move forward, going on to shoot more features like the upcoming The Miseducation of Cameron Post, about a young woman (Chloë Grace Moretz) who is forced into a gay conversion camp. The timing couldn't have been more prescient, it turned out, as they were filming during the inauguration of President Trump and Vice President Pence, the latter of whom has notoriously been accused of supporting the controversial practice and limiting the rights of LGBT citizens while governor of Indiana. "It felt good to be creating something so timely," she says. "We all just had this sense of, 'Wow, we're making something really special.'"

Talk to me about the experience of making American Honey. How did it feel afterward vs. how you thought it would feel going in?

A lot was on my shoulders. That was a lot of pressure in parts and that was hard because I'm a people pleaser. I guess my only thought before was, "Am I gonna be what they want me to be?"

Going into that movie, how do you prepare?

You don't and she [director Andrea Arnold] doesn't want you to prepare. The only thing you've gotta do is listen to music; just listen to certain music to get me into certain scenes and to get me into a certain head space. And I just stayed in a bubble, so it was nothing outside of mag crew or American Honey that I did or talked to.

What did it feel like when you left it all after wrapping?

Heartbreaking. Because I'd never done films before, so I found a family in it and they became really close to me and I got really used to hearing them outside. So to leave that and go back to your old friends and old life — because I went back to Texas — it was just so weird and I was really not ok.

What are your relationships with them like now, especially with Andrea?

She became family to me as well. So, I have this "are you good?" attachment to her. I didn't want to film another thing after because I felt like a traitor and when she mentioned working on another script I was like, "Pffft, I'm sorry what? Where am I?"

Since American Honey, your directors for the short "Born in the Maelstrom" and The Miseducation of Cameron Post have both been women. It's interesting to have worked with so many female directors.

Yeah! I've only worked with female directors. I've been around a lot of females which helps because you're vulnerable and you can be open and they get people who are layered.

When American Honey was finally a thing in the world and there you are at Cannes, what is running through your mind? How are you processing seeing your face on the poster?

Going to Cannes, I had so many breakdowns. I just remember sitting somewhere outside of my hotel, in front of this wall, just crying because I was so overwhelmed and two people came up to me and recognized me from American Honey and I was like, "I'm literally crying right now and you recognize me." That was really different and just like whoa. People were about to watch my heart and my soul on a big screen and judge it. That was really nerve-wracking and I felt really exposed, but wow we were at Cannes! That doesn't happen! But I got to be with everyone again and it was our little reunion and that was really special.

From your family's perspective, what has been their feedback on it all?

They're really stoked for me. They knew that I was different and they knew that I was not happy in what I was doing. I'd talk to them and be like, "This is not what I want to do with my life. This is not my life. There's something missing." So after that, I feel like they don't truly understand what all this means to me and what it does to me, but they just know that Sasha gets to do what she wants to do and that's good, so she's good.

So you show up for the first day of shooting on your first film and how do you feel?

I mean, I got in a dumpster! So yeah, you're like, "Okay. We're in this." I remember I would kind of side check [to Arnold] and be like, "Are you sure? Are you sure? Is this good? Are we good?" And she was like, "Sasha, we chose you for you and you're doing amazing." And I'm covered with chicken juice so it's like cool, we're in it. We kept it very intimate so it was a nice way to ease into it but also very crazy.

Tell me about your upcoming film The Miseducation of Cameron Post.

It was cool because we were filming during the inauguration about gay conversion camps when there's someone trying to put money into getting more [of them]. We all just had this sense of, "Wow, we're making something really special." It was set in 1993 — that's not long ago. It felt good to be creating something so timely. I play Jane Fonda, so I'm already at the camp and I'm who Chloe meets and I'm very anti- everything, so it's very cool to be just like, fuck this.

Let's talk about about your relationship to fashion. You have a very clear sense of style. How would you describe it?

I see it as a more exposed self-expression. I like to be comfortable — I'll paint my nails pink if I want to feel really good. I like scrunchies and crew necks, because they make me feel swallowed. I like to do weird things and I like little details, so if my scrunchie is pink, than I need something pink in my socks. I think it's just how people view tattoos: It's just art and how you want to carry yourself. Whatever makes you feel good is what you wear.

Growing up, do you remember when you felt that agency in your self-expression?

Yeah. I only wore basketball shirts and big t-shirts because I was like, "I don't care. I'm straight chillin' right now." I just wasn't trying to be that out there and that open. Then it started to develop more and I started finding cool pieces. I like to put random things together. I have these Dior shoes with diamonds on them and I'll put them with my thrift shop clothes because I just mix; I like to do different things but it's also not to please other people. This is simply for me.

How did your relationship with Louis Vuitton come about? What's it like to see your face on that enormous ad?

I love them. I love Nicolas [Ghesquiére, Artistic Director of Women's]. I built a cool relationship ship with them and a very organic one during Cannes. I'm not a high fashion-type of person, but when I wore their clothes I felt good.

[The campaign is] pretty insane and also a very soft "fuck you" to people who were like, "What are you doing?" or "What are you wearing?" I can wear this too. It's amazing, because it means other girls who look like me or have their certain style and don't feel like they can wear those types of clothing feel beautiful. I don't have the model body. I'm not tall as fuck. So, it's really cool.

Do you hear that reflected back from fans?

Yeah! They're like, "You look just like me! How special!" and I'm like, "Yeah man! We can do it too! We can do it!" You don't need those clothes to feel like that, but its just how you feel. You can wear anything as long as you wear it with confidence. Choose your style with it. There's a lot of people who wear those clothes and wear all these designers, but you can tell its not them. They're just trying to be this person. It's like, you can wear that stuff but wear it like you, and make it personal.