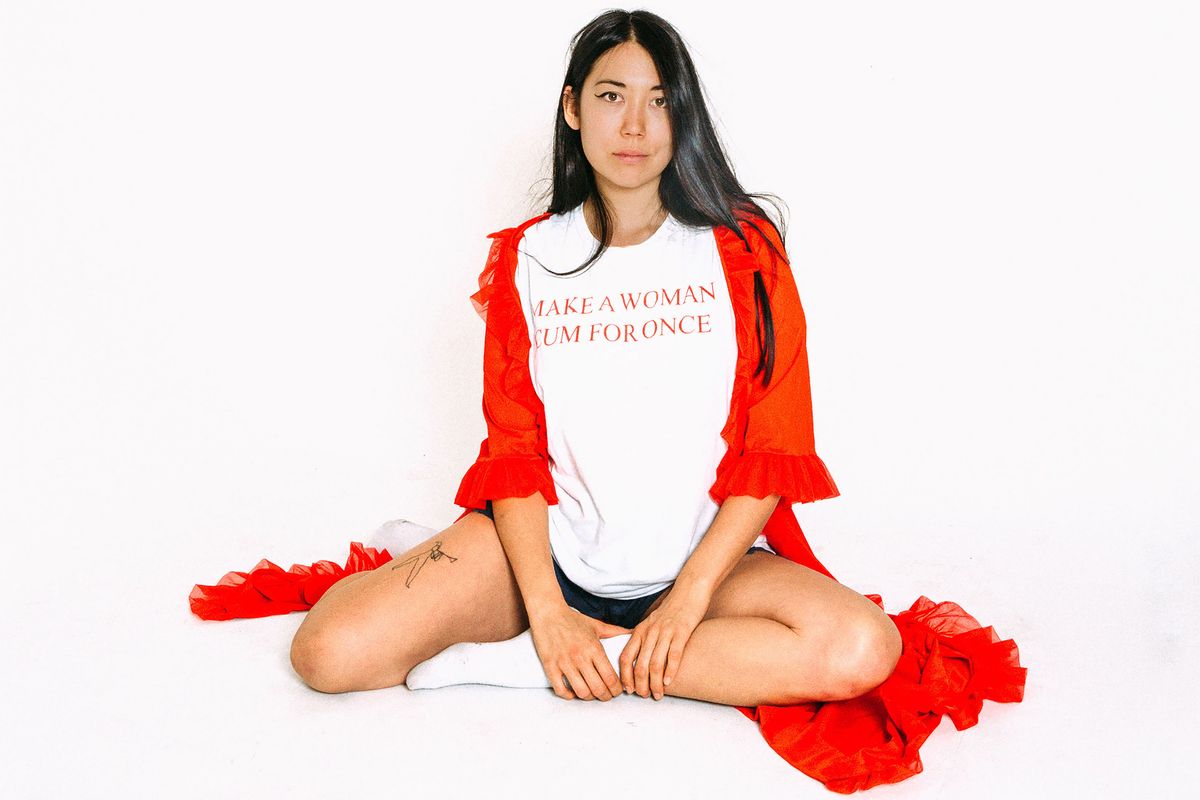 On SASAMI, the debut eponymous album from Sasami Ashworth, the LA-based musician lets go of the drafts that have been piling up in her mind and burning a hole in her notes app. Her new record, out today via Domino, is a cathartic collection of bittersweet rock songs chronicling a year of singledom and heartbreak and carving out a space to sit with feeling of loss while meditating on ways to move towards a resolution.

In an ideal world, Ashworth tells me, songs are like the best kind of astrology meme: broad enough to relate to many, but specific enough to feel insular. "Even though it's totally about my personal experience, in an ideal world people would hear my music and have their own experience with it that has nothing to do with mine."

The "Not the Time" singer's journey to making a record started with an unlikely instrument: the French horn. After studying classical music –– or as she likes to call it, "karaoke of old dead white guys," –– at the Eastman School of Music in Rochester, New York, Sasami was finally able to flex her improvisational and creative muscles. Her musical CV covered everything from being an elementary school music teacher, to film scores, to recording sessions, to playing French horn and singing on Wild Nothing and Vagabon albums. It was only a matter of time before she started playing with LA indie rock and pop circles alongside her brother Joo Joo (who plays in Froth), and soon she joined the band Dirt Dress to play guitar and synth. In 2015, Ashworth joined LA noise-pop outfit Cherry Glazerr as their bonafide 'synth queen,' where she toured alongside Indie rock heavyweights like Mitski, Snail Mail, and Japanese Breakfast.

By this time in her life, Ashworth had been consistently cutting her teeth and gathering tools to front a solo project for nearly a decade. However, this wasn't necessarily her goal when she started writing the album. It was on the road with Cherry Glazerr in March of 2017 that Ashworth began recording and arranging demos on an iPad in her free time. The songs started off as a way for her to mess around and sharpen her guitar skills, but eventually bloomed into a fully-realized debut LP. In 2018, Sasami officially signed to Domino and shared her first two singles "Callous," and "Not the Time," on a 7-inch, and later put out "Jealousy."

As a teen, Ashworth felt like she had a foot in both camps. "I always felt like I didn't know anything in the rock world and I didn't know anything in the classical world because my brain was so split. I felt so inadequate in both [....]." But her debut –– with its pristine instrumental arrangements and killer guitar parts –– showcases her expertise in both realms. Sasami's sound floats easily from dreamy Stereolab-esque rhythms to bursts of heavy post-punk distortion, without ever losing command of detail and tone. It goes to show that you don't need to compromise one part of yourself to excel at another.

We sat down with Sasami to chat about the new record, how to deal with condescending sound guys, and her endless love for Liz Phair.

I never really had this impulse to be the front person. I've always been more interested in composition and arranging. When I was in Cherry Glazerr, it was definitely more of a supportive position. I just made this record and so, as a functionality of promoting it I decided to start playing shows so that I could put the album out.

What was the transition like from being in the mindset of classical training –– one that is so focused on how well you can replicate someone else's work –– to the mentality of teaching, and now writing and creating your own songs?

I call it karaoke of old dead white guys. School in America is so crazy expensive, so basically the second I decided to go to music school I pretty much locked myself into a life of working non-stop because I payed for school myself. Since then, I've pretty much done music every single day. So much of going to school was learning shit and so much of being a teacher was learning how to work off the cuff and improvise and also create music from a super imaginative, creative, theatrical place, as opposed to this super, written-on-the-page, following the rules, replicating the perfect version of something that people have done for 400 years.

To what extent do you view music as a job versus a creative outlet or a hobby?

Well when I was making the record, I was writing the songs while I was on tour with Cherry Glazerr and arranging them on my iPad while I was in the tour van. It was very much a side project and I never intended to leave Cherry Glazerr to put the album out. Then at a certain point I had spent so much money on making the album and had a whole record. I think everyone goes through this process: when they're making the album, they try really hard to separate the music from a job, but then once the album is done and you have to tour it and do press and stuff, you engage a different muscle group.

"You give some dude a little bit of space to participate and all of a sudden, they're taking over."

You often hear stories of women in music facing a kind of condescension when it comes to certain technical aspects of performance or sound. Have you ever experienced that?

I've been touring so much that I've experimented with so many methods of dealing with it. In the past, one method was just coming in really hot and being very aggressive, which actually in my experience doesn't really help. I think the reason why a lot of women do not have that impulse to invite the sound guy to be a part of their team is because in a lot of peoples' experience you give them an inch and they take a mile. You give some dude a little bit of space to participate and all of a sudden, they're taking over. I try to use the most wholesome method, which is inviting the sound person to be a part of the team and proving right off the bat that I have a lot of knowledge and wherewithal and conviction of what I want it to sound like.

Since you've playing in the LA music scene for several years now, what trends or changes have you noticed?

Do you think that's a trend specific to coastal cities, or do you see that happening across the board?

I was talking with someone from a Midwest state about how that normalization of diversity is not necessarily as prevalent in some of the smaller cities. That kind of activism can start in the big cities and hopefully becomes more normalized in the smaller ones. I also think it's really important to remember that a lot of musicians live in a super liberal socially progressive bubble. It's important to not feel like the work is done because it's diverse in New York or L.A.

What were some of the bands you liked to listen to growing up?

Growing up, I was obsessed with Strauss, Mahler, Brahms and Tchaikovsky and I was really obsessed with jazz so, I listened to a lot of Coltrane, Bill Evans and Miles Davis. Because I grew up in LA and went to an arts high school, I went to shows at The Smell and The Troubadour. I was listening to mostly classical, but I also listened to The Dirty Projectors and Elliott Smith. I had a pretty eclectic experience.

Can you tell me about what it was like playing with Liz Phair, Blondie, and the Breeders?

Playing with Liz Phair was such a total trip because I'm a huge fan. She was super influential to me as an artist and as a songwriter. I feel really connected with her guitar playing. So that was really crazy. Plus, we were both opening for Blondie, and it's weird because I feel like she was so stoked to be playing for Blondie and I was so stoked to be playing with her, so it was really wild. It was like a nesting doll of teen dreams.

I've noticed that some of your videos in general are a little more goofy, but the songs are more somber. Could you speak a bit on that contrast?

I'm just a silly person. I feel like people who come to my shows are always perplexed by how goofy I am in my stage banter, but then how serious I am in my songs. I think some artists are truly tortured, sad people and I don't think it makes their music less authentic, but I'm not actually tortured and sad. In the moment when I'm writing, I do feel really sad. I feel really emotional, but I feel super grateful that I can use the music to process that. For me, the songs felt like writing a letter and you don't write a letter if you don't have something to say, and you don't have something to say if you don't have any feelings.

Were you ever nervous about the reception from the people who the songs on the record are about?

I have generally pretty good relationships with the people that created those emotions, because I feel like my processing of the emotions truly happened through making the album. I think it's already proven to me that people aren't going to be able to tell which songs are about what. I say this all the time, but I think in an ideal world your song is kind of like the best astrology meme, like anyone could take it and be like, "Oh my god this is exactly what I'm going through." Even though it's totally about my personal experience, in an ideal world people would hear my music and have their own experience with it that has nothing to do with mine. In general, my conclusions on the songs are that I'm sad but I'm not upset with them about it, or that I'm sad but it will be okay, or that I'm sad but it's just not the right time.

How much of the album is about looking backwards versus looking towards the future?

Most of the songs were very much written in the moment of me processing my emotions. I think a lot of them are about what happened in the past but how I feel about them now, which is calm or resolve. Even the last song on the record, "Turned Out I Was Everyone," the lyrics are "Thought I was the only one / Turns out I was everyone," which shows the sentiment of: I thought just because I was single and going through this that I was the only one that could feel these lonely emotions, but actually even my friends who are happily married or in relationships feel that same deep loneliness. It could be expressed the other way, too, people in every situation have the capacity to feel deep happiness. There's a lot of emphasis on romantic relationships and interpersonal relationships when really your relationship with yourself is the most impactful and grounding one.