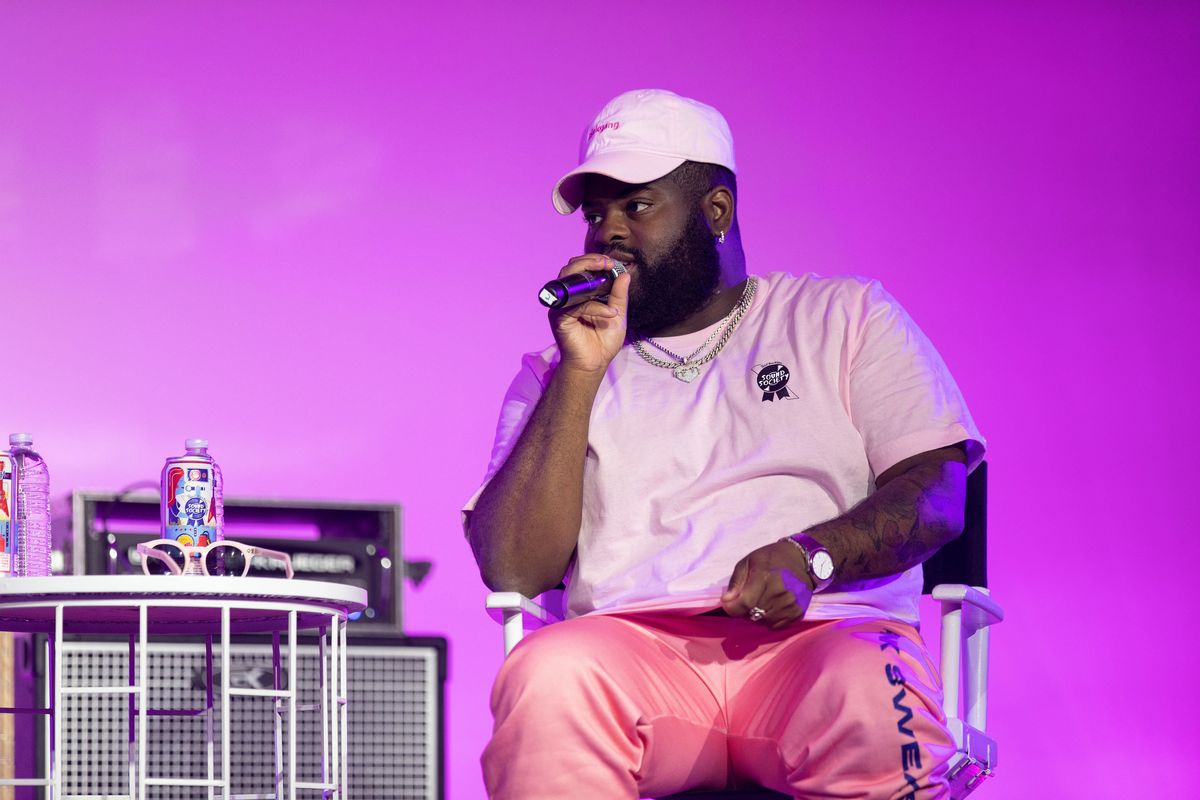 The tone of Pink Sweat$'s voice is somehow reflective of his name itself — bright, airy, and caring, while also comfortable and secure. He crafts full-on R&B-laced pop ballads, drowning careful plucks with his carelessly flawless vocal runs and lovesick melodies. He's a master of acoustics, with a near expert-level vocal range that he only began showing off publicly a year ago, on his 2018 debut single, "Honesty."

Over the course of the past year, he's put out a wide range of material, taking his over 3 million monthly Spotify listeners on downtempo journeys through his most intimate trains of thought. "Honesty" has triumphed on streaming services, but for many it's served merely as a preamble to his sprawling EPs, Volume 1 and Volume 2. The projects are more succinct than brief; his vision of stripped-down glimpses into a complicated history of love and loss resonates when compared alongside the 2019 radio-pop monolith that prioritizes quickness. He's providing a whole new take on heartbreak stories, one that's nostalgic in an era where slow love songs have faded from "trite" and into "classic."

Despite the ease with which he approaches singing sans heavy instrumentals or heightened production, Pink Sweat$'s journey to viral success hasn't been an easy one. After being diagnosed with achalasia, a rare disorder that prevents food and other liquids from passing through the esophagus, he faced life-threatening obstacles that would nearly cause him to end his career. Never backing down, Sweat$ is still here today, and his fans — who call themselves PinkGang — celebrate him for his resilience. He's been chosen to front Pabst Blue Ribbon's new Fearless campaign because of the ferocity with which he's launched his career in the wake of struggle. The campaign relies on the fact that, in order to confront fear — and risk loss — you must embrace it first, an experience Sweat$ has welcomed in his life.

PAPER sat down with Pink Sweat$ to talk about the new campaign, his recent projects, and how he feels about getting launched into the mainstream through his gloriously-crafted songs.

Your music is a mellow blend of a lot of genres. Does this calmness come naturally to you when you're writing and recording, or is it something you're working on deliberately to deliver as a listening experience?

It comes natural at this point. I have been writing in different genres and styles for a long time. I feel pretty honed in on my sound now, so when I go to record I don't need to think about my delivery.

The hype has built quickly in the past year around your music, and rightfully so — how does it feel to have people connect to these songs? Do you find yourself getting recognized on the street?

I have been getting recognized more and more. It's always a blessing to be able to spread love, so it feels amazing to be approached and have fans just looking to connect.

You're front and center for the PBR Fearless campaign. How do you convey fearlessness through your work, especially in Volume 1 and Volume 2?

At the beginning, people would ask me all the time how I could be making a project in R&B without any drums. I just knew I wanted to do something different, and showcase my vocal and lyrical ability. At the end of the day thats what the Volume series allows me to do. I can't hide behind any production, I just have to shine on every record.

When you were diagnosed with achalasia, it presented a unique battle for you to overcome daily. Can you tell me a little bit more about that diagnosis, or the reality of living with a disease that people may not know about?

Achalasia effects the motility in your esophagus. If it goes untreated it becomes extremely difficult to keep food and liquids down. At my worst, I had lost around 30 pounds in a really short period of time. That was the scariest part for me.

How do you convey struggle in your tracks as opposed to fearlessness? Is there a specific track that stands out to you when considering struggle?

I don't really think about that during the creative process. When I'm recording I try to be as honest and authentic as possible. It's not always about your words, but also how you deliver them.

How does it feel to break through to the mainstream and have a platform to spread your message? What's a huge takeaway you want your fans to get from your work?

I always say I make music for people to feel something. I just want to make you think and hopefully allow you to feel the emotions I felt making the records. The success really lets me know that I'm connecting, and thats all I'm looking for from my fans.

What excites you most about going on the upcoming leg of your tour?

The first leg of tour was CRAZY. I can't wait to do it again in completely different cities. There's still so many audiences I haven't been able to touch yet. When you come see me live there's no backing track, no prerecorded vocals, it's just me and my band putting on a show night in and night out. I know people are coming to watch me really sing, so I do my best to go in and do that every night.