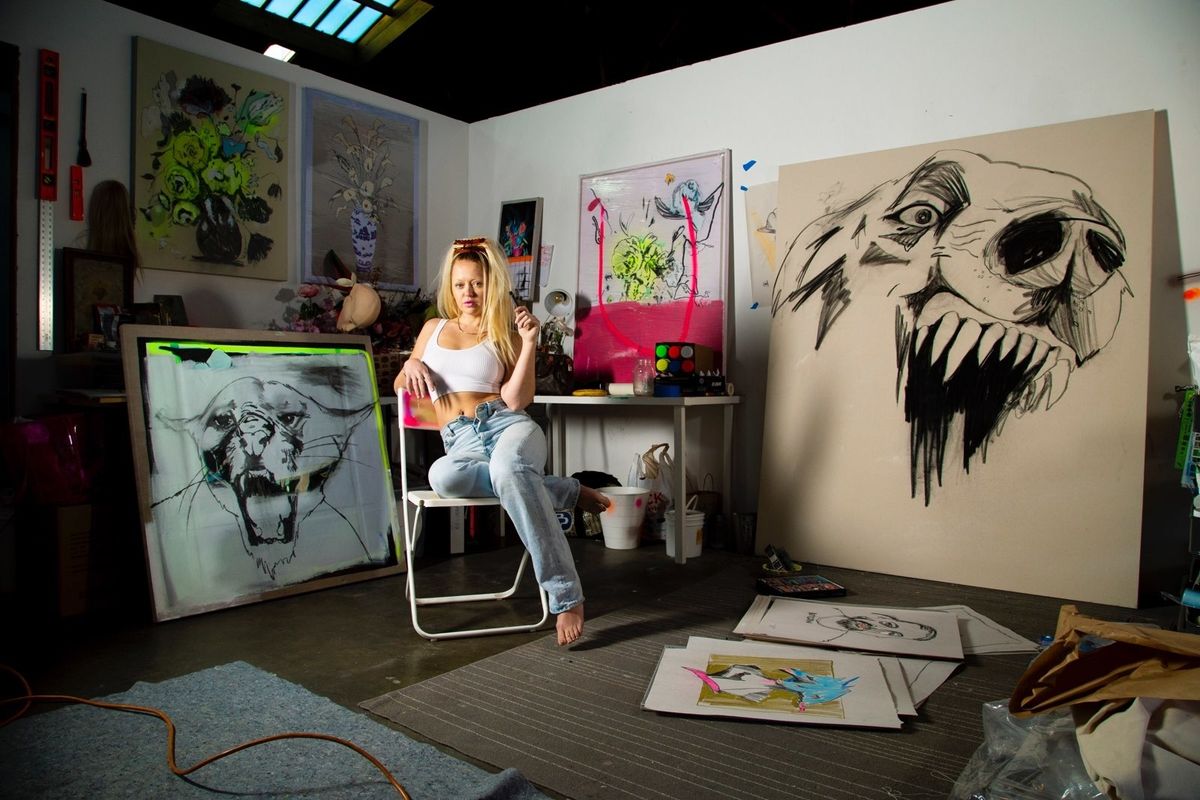 Into the Wild World of Pee Girl

Pee Girl perches on a stool at the center of her studio. Charcoal dogs snarl on a canvas bigger than she is as dainty painted florals watch, seemingly plucked from contemporary toile. Neon spots the concrete floor. Fake flowers and paper cherubs pop out between paint bottles.

"Juxtaposition helps me," she says, moving a hand delicately, embodying her space like a modern, distant imagining of The Birth of Venus — if the Botticellian goddess were a bleach blonde Californian who Juuls.

This is a variation of the Pee Girl Fantasy. As fans of her sizable Instagram will tell you, she can be found wandering the desert, donning an eye patch and fantasizing about Dubai. Other times, she's gagged and wrapped in soft bondage, offering a tip for where you can buy her top. Often, you can find Pee Girl hanging out with artwork of a certain aesthetic, thong on proud display, smiling at you with the caption, "just me and my art! lol! ready..set.. action!"

Pee Girl is an ongoing performance. Pee Girl is real, but Pee Girl is a simulation— a part of Los Angeles-based artist Taylor Marie Prendergast's practice. Pee Girl does well with extremes, constantly working to manifest a fine tuned, sexy-and-uncomfortable aesthetic, whether through her robust painting practice or by selective collaborations with artists like SOPHIE, David Lachapelle, Eli Russell Linnetz, Jason Altaan, and more. She's an artist who does everything balls to the walls — or not at all.

For example: her studio routine is quite rigorous. "I have a pretty strict regiment," she says, explaining that she starts every studio day by drawing 60-second drawings for 45 minutes with her left, non-dominant hand before laying them out and moving on to three 5-minute drawings, still with the left hand. She then moves to another three drawings for 15 minutes with her right hand. This has been her studio process for almost 6 years.

"I cannot work if I do not do this," she says. "I'll feel like a cold turkey. My line and my ideas start to get loose and more fluid from these exercises and, when I go to a canvas, I look at all my drawings because I'm sketching what my subject matter is."

Like her ongoing performance, Pee Girl's current focus in painting is on extremes: she's juggling florals inspired by the works of 17th century female painters "who didn't have very much notoriety because they were female" through neons and snarling, mean, and mythic dogs like Cerberus. Her attraction to these extremes are a version of reforming pain as pleasure and vice versa. The painful is partly inspired by her experience living with a conservative father in Southern California who had very dark tendencies, while the pleasure comes from having queer friends who have "reinvented a figure like Cerberus" by living in a space that many Americans vilify.

"This work is about finding a new meaning and reinventing it," she explains. "For me, I've found this place of heaven in the gates of hell. It's relative, especially in these times."

Pee Girl makes these works primarily using charcoal ("I fucking love charcoal. I live and breathe charcoal") that she applies to stretched canvas or linen that she applies various paints to, specifically neon spray paint ("The neon, to me, is a toxic, contemporary, illegal color — it's taboo"). Like her aesthetics and her subjects, she works best when exploring opposites. This is her sweet spot: spotlighting contrasts.

"I work really well if I can push against things in the opposite way," Pee Girl explains. " If I'm doing florals and brights and lighthearted paintings, then I need to be able to slam the opposite side of the spectrum because then I start to have a conversation in my studio. I can bounce back and forth, into this box of anger, explore that, and climb out of it and get into a soft, delicate box, and explore those emotions. It helps to have them both. They structure each other."

Her Instagram has a similar function, one that can be more complicated as it's easy to overlook this constructed character as an LA chick trying to catch eyes. "People either get it or they don't," she says. "The people that do get it? You know: they stan... My actual, physical art practice slams against this Instagram, bimbo persona: it's the same thing. I work really well with opposites."

TAYLOR MARIE PRENDERGAST on Instagram: “will I be rich or will I be pretty 📸📸”

As far as origins for this urinary performative person, Pee Girl was formed by recognizing that she was an outsider in art school and art circles for being who she is: a small blonde female. Taking this image of herself to Instagram is both an embrace of the self while being a feminist act without directly being feminist art. She is acknowledging her identity while fucking with the perception of how someone like her should behave. "[My identity] is going to affect my work and my career, regardless," she says. "Why not turn it up to 100? Why not fucking put it on blast?"

"It's slow motion multi-tasking," she says of the multiple wings of her practice. "Part of my persona is making these paintings and part of these paintings is part of the persona. It helps me cater to Pee Girl if I'm in the studio because I can leave here and shift my mindset to a different type of art form. Or, after being Pee Girl, I come in here and turn her off to be the messy painter."

Noting proto-Instagram babes like Bai Ling and Cicciolina as inspiration for crafting her character, Pee Girl says "it's a lifestyle. I started to play the game [through Pee Girl]. The more I did it, the more it supported my practice. I started to build my teepee."

"[My identity] is going to affect my work and my career, regardless. Why not turn it up to 100? Why not fucking put it on blast?"

The result of this dueling practice, between painting in the studio and being glam before the camera, has presented her with many opportunities. She gets photographed frequently by other artists and is asked to collaborate in many ways. She is quite selective as she is absolutely maintaining a figure, visually and characteristically. "There's a whole artwork to all of it," she says, alluding to how being a muse requires selectivity. "If it fits into my vision for myself, then I'd love to collaborate," she says. "If it doesn't? Thank you, but no thank you."

This is more or less how she ended up collaborating with SOPHIE to create the unreleased song "Take Me To Dubai." This collaboration came from a chat at the musician's house, where a mutual admiration emerged that resulted in their going into the studio. "I was like, Alright, fuck it: let's do it," she says. "I love and respect SOPHIE and, if I'm going to do a song, it was going to be with her... I had never performed before either."

Of course, an experience as such is yet another example of how Pee Girl is constantly working, constantly committing, constantly questioning who she is and who she can be. Still, she recognizes where the core of her practice is: her painting. "Painting is what's going to carry me through the rest of my life," she says. "These other things are leverage to get me there, somehow. They might bite me in the ass on the way but, ultimately, I know my vision and know who I am. Eventually, people will catch up."

Pee Girl wants to grow this year. "Slam yourself into an opportunity," she says. "I want to push myself and take some risks."