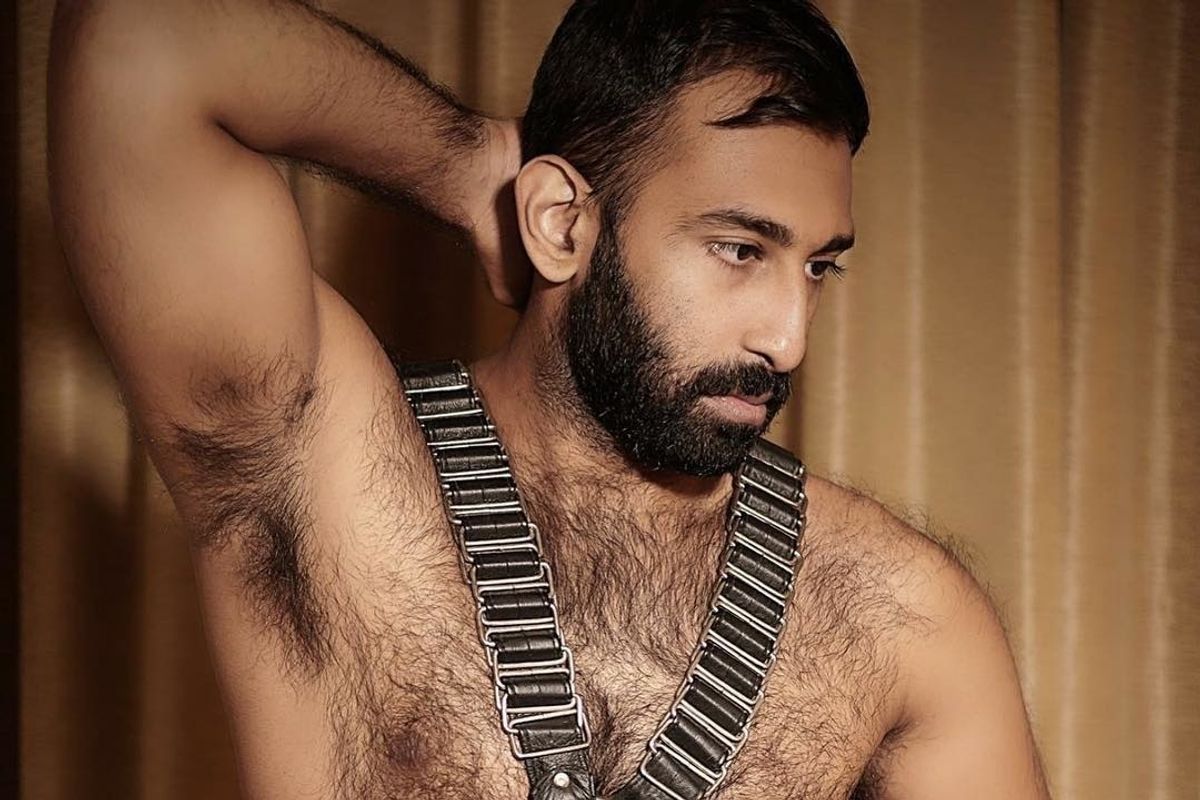 We spoke to Mushtaq on the phone about discrimination within the LGBTQ community, navigating multiple identities and what he loves about the leather world.

Do you feel connected to that part of your identity?

Actually, it's really hard to say. There are things that I do — for example I don't eat pork, but then I live with my grandparents. So basically, they feed me Burmese food. And I grew up with Bollywood and all of those Indian movies, so it was kind of one of those things where you're kind of involved in it, then at the same time you have to negotiate your ethnic culture with your sexual interests. Even though I have moments where I want to blast Punjabi music in my car, I can't really post that on Facebook, because nobody's going to understand what I'm talking about. "Look, I'm playing Daler Mehndi, I'm blasting it in my car, look at how cool I am." But oh, wait, no one understands. It's Punjabi ratchet-ness, basically.

I lived in San Francisco, and I was always really curious about my sexuality. And what ended up happening was I sort of fell into the Folsom Street Fair scene. All those kind of things and sparked my interest in the community and those kinds of events. So I eventually just started to go to leather events, started to go to places that sort of had a free sexuality, free acceptance kind of policy. So, like places where, for example, you can wear a jockstrap and a harness to a bar and that was acceptable.

What's it like to be in the leather community and to be Muslim and South Asian? Do you find like-minded people? Do you ever feel isolated?

It was kind of strange because you know you're going to be one of the only people in the room with this experience. These days, I'm seeing an emergence of people who are South Asian in these kind of spaces. If you were to look at me, I look like a Punjabi, and I'm the only one or probably one of the very few people in the room that look like that. It's really one of those things where I'm like, "Oh, so I'm a unicorn."

It's hard to sort of articulate, like, okay, so these are what my problems are in racial identity. And actually, this is how I can legitimize my experience, as this kind of racial minority. Often, Asian Americans are discriminated in media and other forms of culture and representation. There isn't a Black Panther equivalent for the Asian community. There isn't a Superman for the Asian community. So, basically I'm basically trying to fulfill that role. Can I necessarily be this representation, because if not me, then who?

Does it feel like a lot of pressure to representing all of these different identities?

Well, the thing is, I have to be me. At the end of the day, I can't be like, "Oh my God, I'm not going to go to a sex party, because what are the other South Asians going to think of me?" This is who I am, this is what I do. As part of being in this leather community, being a BDSM cardholder, basically sex and kinky shit at the end of the day are a job. Looking like this sort of avant-garde sexual outlaw is part of the job. And it's a job that I love to express, simply because this is what I like. My goal is to tell people, you can be Asian, you can be South Asian, you can be whatever you want and still be yourself and still be involved in these kinds of activities. I know that there is a lot of anti-sex and pressure for a lot of people to alleviate the sexual part of their identity. Especially with first and second generation Asian people.

Did you get pushback from your family and your community when you first got into this culture?

My family didn't have so much of an issue. They were generally supportive, but I think a lot of the pushback has been online. If you look at the comments on the YouTube version of a full screen documentary I was in on gay Muslims, there's a lot of people saying, "You can't be gay and Muslim." So this is who I don't actually interact with. I don't really interact with people in the South Asian community because, well at least where I'm from in Orange County, it's a little different. And occasionally when I do run into them, again these aren't things that we talk about, and they know who I am and they know what I do, but these are not things that they're worried about. A lot of them are worried about living the "rags to riches" kind of motif. And for me, it's like, a lot of that rests on cultural representation as well. That's why I'm pushing so adamantly for greater representation in these kind of spaces. I'm a professor, but even now I'm still seeking active representation to be a model and really start to put my face out there. Simply because I want to show the world that you can be South Asian, you can be hairy, you can be gay and still project a positive image of sexuality.

And I feel so much of it too is just the misperceptions that people have about Muslims in America and how that's gotten so distorted over the past few decades.

I got this really interesting question when I was on a panel. They asked about homonationalism, and this idea of pink-washing and how places like Israel are always seen as the gay Mecca, whereas they still kind of commit these human rights atrocities. And it's fascinating because Muslims are always painted as a group of people that are not sexually liberated, that oppress women, and that are all about active regulation of their sexuality. But there are so many Christian cultures that do the same thing. Look at what we do to access to abortion, purity balls and stuff like that. So basically, for me, I want to provide a space or representation that says you can be sexual and you can be Pakistani and you can be Muslim. All of these things are not separate, you can be whatever you want to be, essentially.

What I do like about it is that the theory of the community is that we're supposed to be the sexual outlaws. We're supposed to be the ones that your mothers told you not to be like, because we have all of these crazy, perverted fantasies. And I think that's what what drew me to the leather community, and the fact that, for example, if somebody tells me, "Hey, I want to wear a diaper, and I want somebody to hold me and treat me like a baby," nobody's going to be like, "Oh my God, what are you doing?" I think that leather community gives space for that. So basically the sex positivity and the nonjudgemental aspect of it. But then it's interesting, because the practice ends up being respectability. Like, "Oh my gosh, as a titleholder, why did you just leave your sash on the chair? That's just terrible!" They do weird shit like that. But then again, the intersections of racism, misogyny, and transphobia, that sometimes happens.

Have you experienced those things within the community?

Well, I know that generally people of color, or any minority, they like to put us in service roles. For example, they like to put us in roles where we're constantly fundraising and we're constantly helping at events and stuff. You're good if you're working, but then you're bad if you're representing and talking about issues. It's a being seen and not heard kind of thing. Somebody was talking about HIV, and I was like, "You understand that black and transgender communities have the highest rates of HIV?" You know, this is well-documented, this is a public fact. And they're like, "No, well when I grew up in the AIDS era, it wasn't a race issue. You're making it into a race issue." And I'm trying to be like, "No this is not, this is now an inequality issue, because even if you have HIV and you're white, you're going to have a higher access to life-saving medications." It's very much a racial and a gender issue. Well, actually, since you grew up in the 80's you can actually talk to me about how access was framed basically against people of color, trans people, and how the media portrayed it as gay white men getting the illness. And gay white men were basically saying, "Oh, because we're not of color, you should be treating us equally."

It's a strange place to occupy, because supposedly they lived it, they've seen it, so they keep on using the excuse of, "Guess what? We've gone through shit that you've never gone through." No, we understand that, but then at the same time you need to look at what's actually happening now in 2018. The picture is a lot different. It's also a localized experience. Their friends are mostly white.

What would you ideally like to see happen in the leather community and society at large?

Equal representation. People of all colors, shapes, sizes, identities, fitting together and being able to culturally represent how they choose. Being looked at as not being dissimilar. Being respected and actually being treated as a human being. Making sure that we acknowledge and we're aware of these problems that exist and are working to end these problems. If you're not going to acknowledge that the problem exists, then how do you actually fix the problem?

What advice would you give to young people in the position you were once in?

I've actually gone back and forth on this one. What I would say is, to a younger version of myself, is that one, you're good as you are. You don't need to pretend to be anybody, you don't need to do anything, you don't need to impress anybody. You just need to be yourself and people will love you. And there are spaces out there that people will take you and receive you really well just as who you are. It's okay to be who you are. And that can go for a general audience too, I feel like there are a lot of people who don't accept themselves. It's okay to be who you are, and regardless of what you might think, there are people out there that will accept you and will love you.