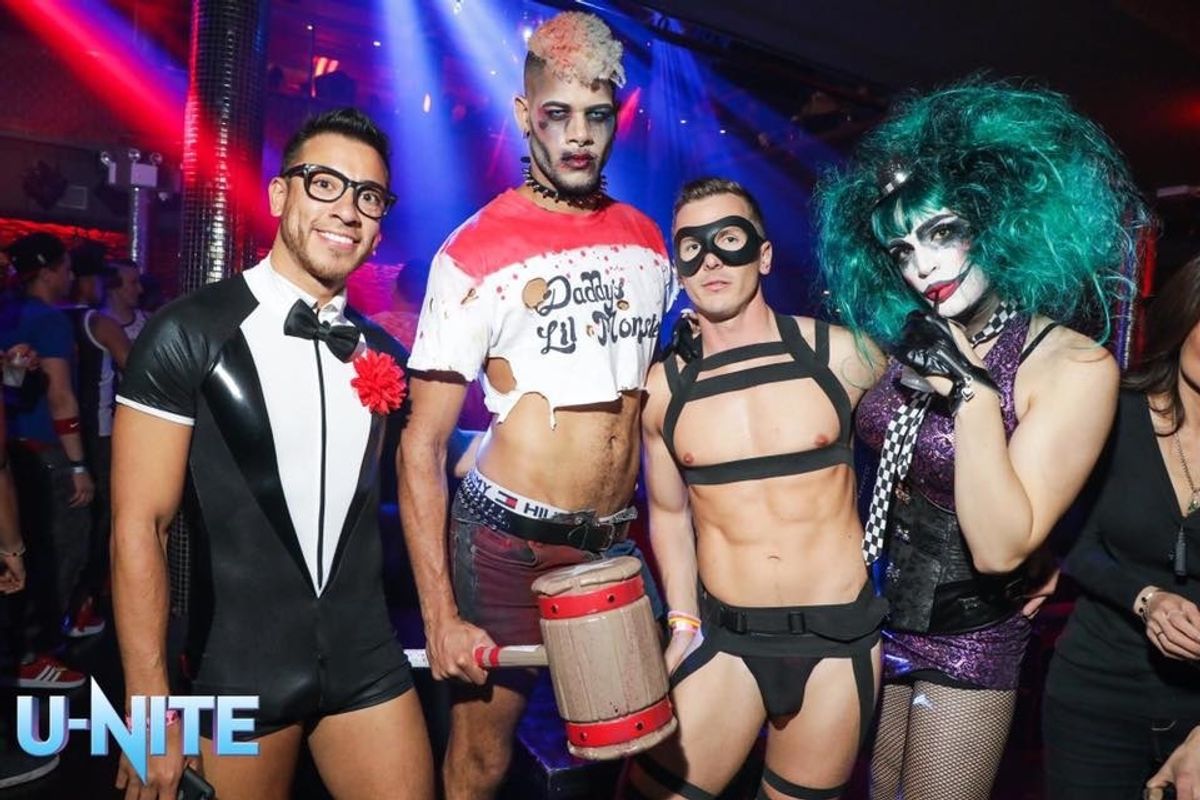 The interestingly named Monica Blewinsky—aka Logan from Morris County, Jersey—likes to throw events with a difference, soirees where there's energy and flamboyance. I talked with Monica in December about how she blew in to the scene and what's she's been down to.

Hi, Monica. When you first came to New York, what was your ambition?

I originally came for grad school at Columbia. I was in industrial engineering. I'd been working at a biotech prior to that, but came to Manhattan to go to school.

And how did you get into nightlife?

I was involved with event planning in college and with a fraternity, but I always had an interest in social events and parties. It shifted that I became more involved with nightlife. I didn't see myself becoming an engineer. That was my family's ambition more than mine.

Your first party in New York?

I was doing some little hosting stuff at Bartini and the Ritz. The first one I did myself was a fundraiser for the Research Foundation To Cure AIDS, with Bianca del Rio and Sherry Vine and 20 other drag queens and nightlife personalities. That was maybe three years ago.I already had a relationship with these folks and got into nightlife through Sherry. She and I were working on sort of a campaign for this new RFTCA. That's how I met Sherry. This was a fundraiser and outreach. We had maybe four or five hundred people there. It was right after Bianca had won Drag Race, so she brought a lot of attention to the event. It was at Stage 48.

That's how I started to get my own name out there and generating a mailing list and a following of sorts. I helped to produce the PrideFest for Pride that year-- the stage show at the end of the parade route. After that, I went to Miami for a little bit, then I came back and started doing events with Vincent Cooper. [He specializes in interactive events]. He'd been working with Brandon Voss a lot and Brandon started going in a different direction—not doing parties so much, doing Drag Race events and drag brunch. We started a party called Eden at the Hudson Terrace. Vincent and I had a show before called the New York VarietyShow, which you came to and were one of the judges.

Now I'm focusing more on the large events like Fashion Week, Pride, Halloween (which was at the Copacabana, with Alan Picus. We had Pearl and Mimi Imfurst) and Dragcon. Also, I produce the weekly Code Red at Electric Room. I'm moving to Miami. I'll still be doing events in NYC and plan to start some new projects in South Florida.

What do you get out of working in nightlife?

It's sort of an escape from reality and people drop their façade. Whatever they are in real life goes away when nighttime comes around. To deliver something really…I don't want to say unique, that's so cliché…but so far out, that they're not going to experience something in their mundane day to day 9 to 5 life. An interesting experience or venue where they can hang loose and let their true self hang out.

You not only throw events, you believe in charities and causes.


Absolutely. People are motivated by the booze and the fun and the scandal even, and the fuckery that goes in in nightlife. To capitalize on that attention directed to something that could deserve a little bit more attention, I think is useful.

Who are your best friends on the scene?

I've met so many awesome people working in nightlife, it's impossible to give labels. But I will say that I always love partying withTrevor Silva, Suzie Hart, Miguel Colin....CT Hedden is also a hot mess of a good time. Brita Filter is a close friend on the scene--we started out at around the same time and have done a ton of fun productions and parties together.

Sherry Vine birthed Monica, I'd say - probably more like a failed abortion. My drag debut was at one of Sherry's birthdays at Industry, and my second or third time in drag was for a YouTube parody video of Katy Perry's "Dark Horse" that Sherry and I wrote and produced, and my first time performing was with Sherry at Stonewall. She's been a great mentor and partner in several projects.

Bianca Del Rio has also been an important influence and special friend on the scene. We met at Oz in New Orleans maybe seven years ago (before Monica existed), and she's been a close, always supportive friend ever since. Business-savvy, no bullshit, humble—we can talk about anything and everything. Same with Vincent Cooper-- he and I share a lot of similar interests and are passionate about creating experiences and supporting our community.

I went to a pre-Thanksgiving event you threw at the Feiden gallery. Later on, I heard there was a broken table. Did the drag queens get rowdy?

I didn't hear about a broken table. We did get a noise complaint from the folks next door. I don't think they were used to having a nighttime event next door with lots of drag queens and club kids.

What's the most fun thing you've experienced at a club or event someone else threw?

I have such a blast at anything Susanne Bartsch puts together. She brings together interesting people, great venues. She puts a lot of thought into really curating an experience for people.Greenhouse was one of my favorite venues she'd throw a party at. She did more of a lounge-y party at Soho Grand with Joey Arias.She's so talented, but so in your face and carefree and does whatever the fuck she wants.That's the kind of energy I try to bring to people because everyone's so up their ass all the time. People, we're here to have a good time, ultimately. What else is life about?

You don't ever miss engineering, do you?

Well, I do have a day job that I keep separate from nightlife, so I've found my 9 to 5 stability in other ways, not engineering. I like to have fun and nightlife is my outlet, a hobby where I provide a space for others to have fun as well.

Do you have a significant other?

That's a fun question. I have a few regular tricks. I'm actually in love with one of my best friends who doesn't know about it yet.

Will you tell him?

I think so. He's been away. I'm waiting for the right time where we're both a little bit more settled.

How do you put together your drag? Glam, goth…?

I get the comment that people can't recognize me because I look different every time.Sometimes I look like some basic bitch from Jersey, sometimes I have colors on my face. Whatever is on top of the pile of crap in my room, I try to throw it together. I'm not going in any direction. It's organic.

Well, keep it up, Monica!