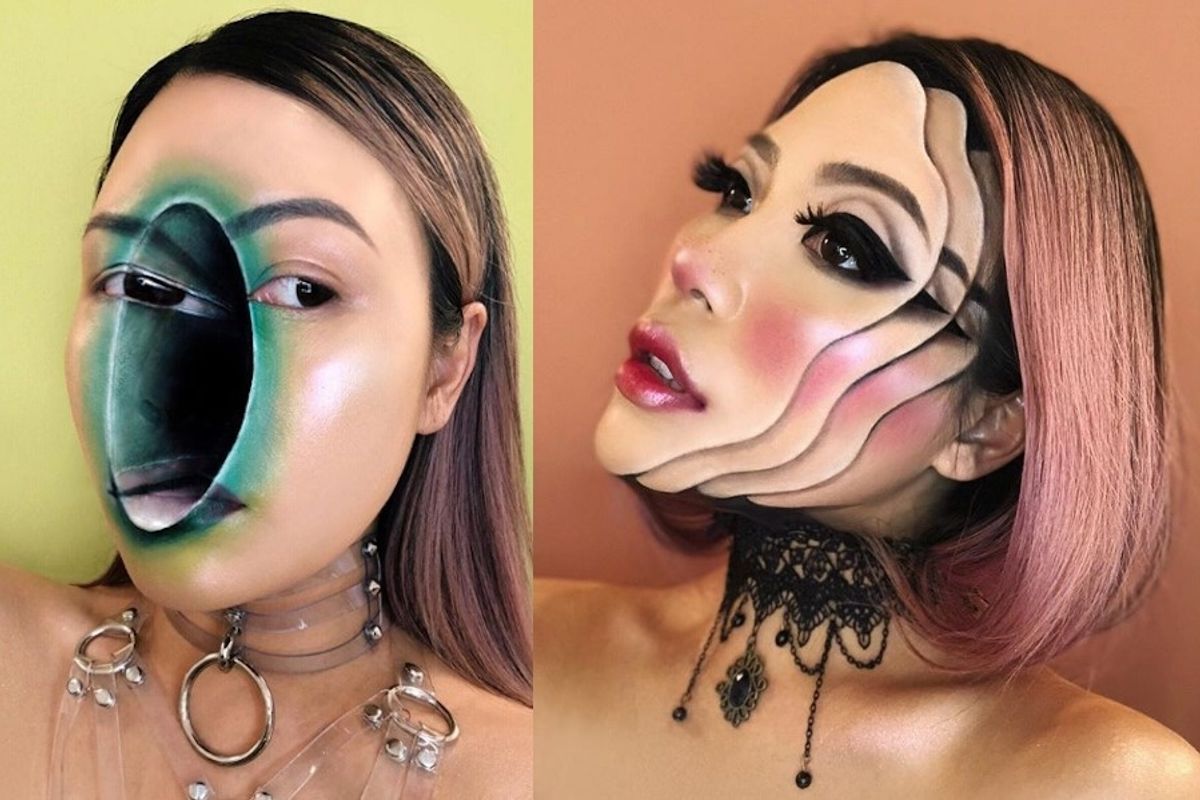 This Makeup Artist Transforms Her Face Into Optical Illusions

Viral makeup artist Mimi Choi uses her graphic sleep paralysis as a source of inspiration for her optically illusive beauty treatments. She tells us of her competitive childhood that contributed to her anxiety and depression where she began to use art as an outlet. Now based in Vancouver, Choi went from preschool teacher to Internet sensation working with brands like Samsung and UNICEF. Using her face as a canvas to create mind-bending illusions, Choi developed her skills through trial and error — studying real objects to understand depth and dimension. Below, PAPER caught up with Choi to find out why she decided to switch career paths, her inspiration behind the illusory works she creates on faces, and the process for creating Uglyworldwide's Halloween digital cover look.

Who was Mimi Choi before you started getting into makeup?

I grew up in Macau — a unique city on the south coast of China near Hong Kong. It was a Portuguese colony until 1999 and so it carries heavy European influences, including the brightly colored colonial buildings, painted tile walls, and mosaic streets. I feel that these diverse and contrasting aesthetics (Portuguese/Chinese and traditional/modern) contributed to the way I view art and allows me to gain inspiration from everything around me.

However, being raised in China also meant that my childhood was very academically focused, and I was subjected to an education system in which the students were ranked openly. I did well in school because I studied extremely hard and viewed myself as my biggest competition, but this came at a cost. I feel that this mindset contributed to issues that I would deal with later in life including my bouts of anxiety, depression, and sleep paralysis.

It was not until my family immigrated to Vancouver, Canada that I started to use art as an outlet and ultimately as a form of self-therapy. I studied science in university because I felt that it was the path that my parents expected of me. It was during these years that I suffered the greatest from anxiety and depression. Meanwhile, I would doodle and paint on my nails when I had free time as a way to escape. I had never felt truly happy until I decided to change career paths from a Montessori preschool instructor to a makeup artist. The first time that I picked up a brush and painted on someone's face gave me a feeling that I had never experienced before. Ever since I made the decision to pursue my passion, I've had fewer bouts of anxiety and have become a more open and positive person.

What sparked your interest in makeup?

During university, I started experimenting with makeup and tried different looks as a form of self-expression. I received compliments and people started asking me to do their grad and bridal makeup despite the fact that I was never trained. When I started my career as a preschool teacher, I would paint intricate details on my nails to relieve stress when I returned home. While I love children, I felt suppressed in a way as I had to act and dress a certain way. One night, my mom asked if I could see myself as a preschool teacher for the rest of my life. When I told her "no," she suggested that I pursue something that I was passionate about. With that, I immediately quit my job and applied at a local makeup school at the age of 28. Within a few weeks, my instructors took notice of my work and the school began featuring my looks regularly. It wasn't until the first Halloween after enrolling in makeup school that I attempted my first illusion which was a cracked face look using 2 Kohl eyeliners. The look went viral on Instagram and Pinterest, and this positive reaction really motivated me to continue pursuing this genre.

I love the problem-solving aspect of painting illusions on my own face or on a model. I don't use Photoshop to alter my looks, so it is often challenging to figure out a way to make an illusion work on a body part using just makeup and paints. When a look turns out the way I had originally envisioned, it is truly a rewarding feeling. I also really enjoy seeing reactions in person and reading reactions online when a look successfully confuses them.

Did someone teach you or did you learn from trial and error?

I graduated from Blanche Macdonald — a local makeup and beauty school here in Vancouver, Canada. This is where I learned fundamental makeup skills. My illusion painting abilities were developed through self-exploration and trial and error. I study real objects constantly to learn about shadows, highlights, dimension, and depth. With each look I complete, I discover something new that I try to apply to future works.

"I experience vivid hallucinations which can be quite frightening. These have inspired some of my more iconic morbid works."

What inspires each look that you create?

I gain inspiration from everything and anything around me. I find beauty in textures, shapes, sounds, and angles as these things evoke emotions within me which I try to convey in my art. As I travel more frequently for work now, I am exposed to new sensations and my mind is overflowing with ideas. I am also very much inspired by surreal artists like Dali, Escher, and Arcimboldo, and contemporary digital art which can be a challenge to recreate on a human face. One of my more unique sources of inspiration stems from my bouts of sleep paralysis, however, which is a condition in which my mind is awake, but my body is asleep. During these episodes, I experience vivid hallucinations which can be quite frightening. These have inspired some of my more iconic morbid works including the hole in the face, melting face, and sliced face looks.

How do you decide on creating specific looks, especially since they are all so different?

I'm a very spontaneous person and usually decide on a look the day of. On occasion, I will go through phases in which I paint a series of looks that are consistent to a certain theme, like my junk food and animal looks. However, these are few and far between. I usually don't plan out my looks on a face chart unless it is requested for a job — instead, I typically go off of what I have envisioned in my mind. I'm constantly inspired so I have tons of ideas stored on my phone and I find that nowadays it is difficult to make time to create looks for myself in between jobs.

About how long does each look take?

My looks can vary in length depending on the intricacy of it. On average I spend about 4 to 5 hours on a piece but have taken up to 7 hours to create my most detailed looks. In addition to the time I spend painting my face, it takes another few hours to photograph, record, edit, and caption my posts on Instagram.

Is it difficult to balance teaching other people, when each look is so personal to you?

I teach people the techniques I use to achieve an impactful illusion, which often boils down to highlighting and shadowing. They can apply these skills to create their own creative looks or even on beauty looks if they wish. While I can't teach creativity, I try to instill confidence in my students which is required to step out of their comfort zones and to create their own trends. I share the challenges that I have faced as an emerging makeup artist and hope to be an example of someone who changed their path at a relatively late stage in life in order to pursue their passion.

What three products are crucial to every look you create?

Three products that I always carry with me in my kit include my Mimi Choi Illusion Palette by Mehron, Make Up For Ever Flash Case and Cozzette Infinite Eyeshadows. The versatility of these products allows me to paint and achieve whatever look I want.

Tell us about the look you created for Uglyworldwide's Halloween digital cover story.

I painted my signature illusion mask look on Jazzelle with facial muscles beneath it. This look was inspired by the "mask" that people put on when they step outside of their homes every day to conceal the truth and rawness inside. I outlined and painted the mask on her face first and then added the muscle tissue using images of real flesh as reference. To give the illusion of the mask floating above the flesh, I highlighted the edges and added the appropriate shadows surrounding the mask. Lastly, I added gloss on the painted muscles to give the look of wetness and to add another dimension of realism.