Is the harness the future of men's fashion? This is the question the Internet has been contemplating ever since Timothée Chalamet rocked a Virgil Abloh for Louis Vuitton "embroidered bib" at the Golden Globes to thunderous, thirsty applause.

It's an exciting query, given the harness' queer ethos and the general disruption of the utter monotony of heterosexual Hollywood men's fashion.

However, ever since Michael B. Jordan stepped out last night at the SAG Awards in a fitted, multi-colored floral Louis Vuitton harness, the question on our minds has been: is the harness the ultimate red carpet thirst trap? 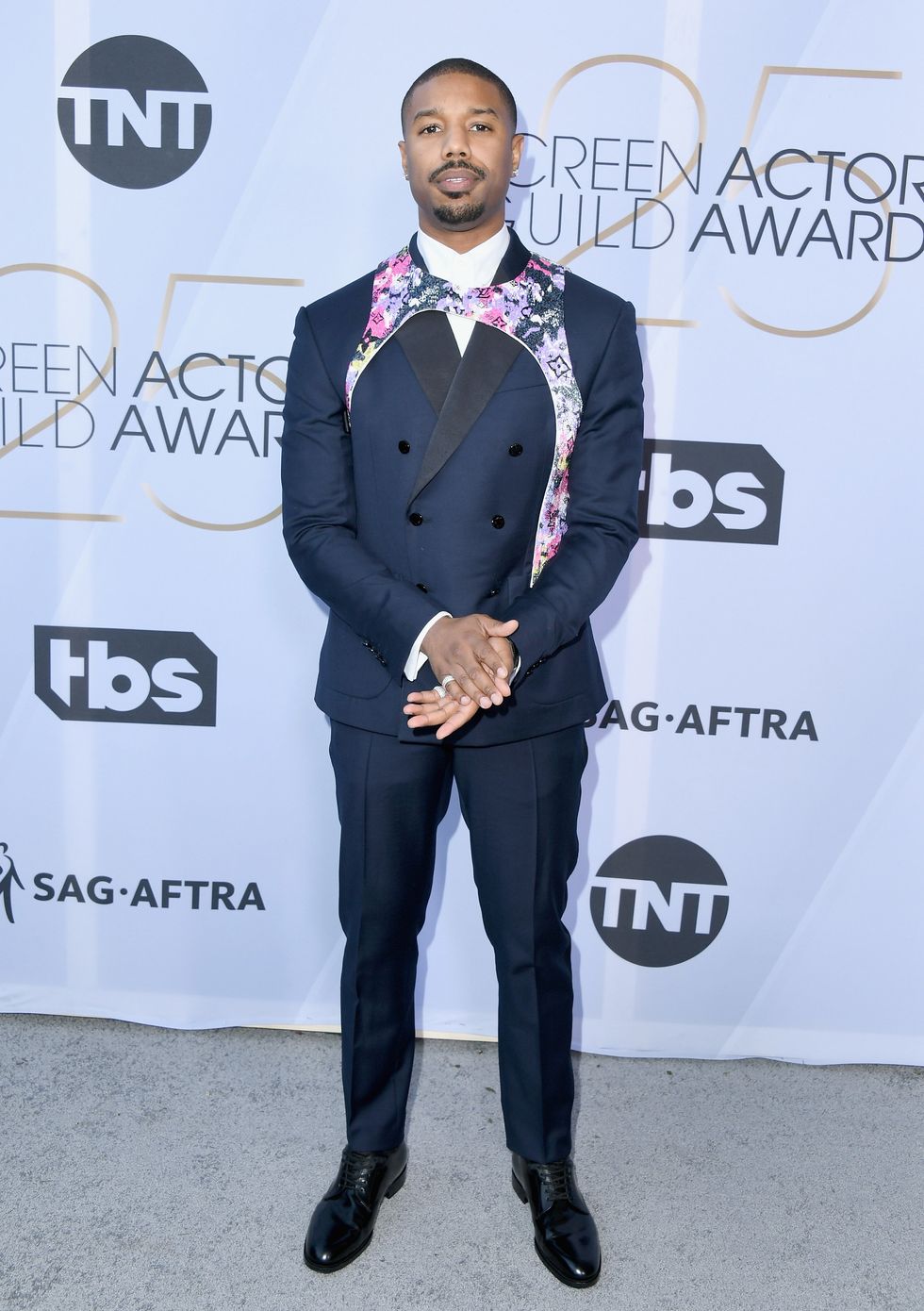 If nothing else, the harness has become a guaranteed ticket to get your carpet look trending. Positive and negative, both Jordan and Chalamet's strappy ensembles have proved themselves magnets for Internet buzz.

There's been hot debate about what the hell Timothée's piece really was, and whether or not it's a radically gender-bending political statement. The disagreement on the merits and overall success Michael's look has been even fiercer. It's been pointed out that his harness' print is strangely reminiscent of Fabletics leggings or a Claire's headband, while the many-layered shirt-double-breasted-jacket-harness combo has been dubbed cluttered.

But while, yes, Jordan's overall look is sort of a mess, the sex appeal of the harness isn't up for debate. If anything, the cluttered overall effect just makes a viewer focus on how much the look would be improved if he shed the button up and jacket underneath. See what I'm getting at?

Let's take it to the experts. As the remarkably sexist and incel-y Urban Dictionary entry confirms, a "Thirst Trap" is:

"a sexy photograph or flirty message posted on social media for the intent of causing others to publicly profess their attraction. This is done not to actually respond or satisfy any of this attraction, but to feed the posters ego or indeed for attention, at the expense of the time, reputation and sexual frustration of those who view the image."

We can extrapolate: the harness is a flirty message SOS-blinked via red carpet, deliberately for the purpose of causing me, and all of Twitter to professor our unrequited attraction, deliberate bait for a sexually-charged online frenzy.

Meanwhile, Michael B. Jordan says his harness was a whimsical impulse. He told Variety: "Why not? It was just like f—k it. I'm going to do it." While the last-minute choice would help explain the haphazard ensemble, somewhere deep down he and I both know his true intention was to lay a floral thirst trap for the internet.

We predict Timothée and Michael are just the beginning — and as you can probably predict, we're here for it. Strap in folks, happy viewing this awards season.