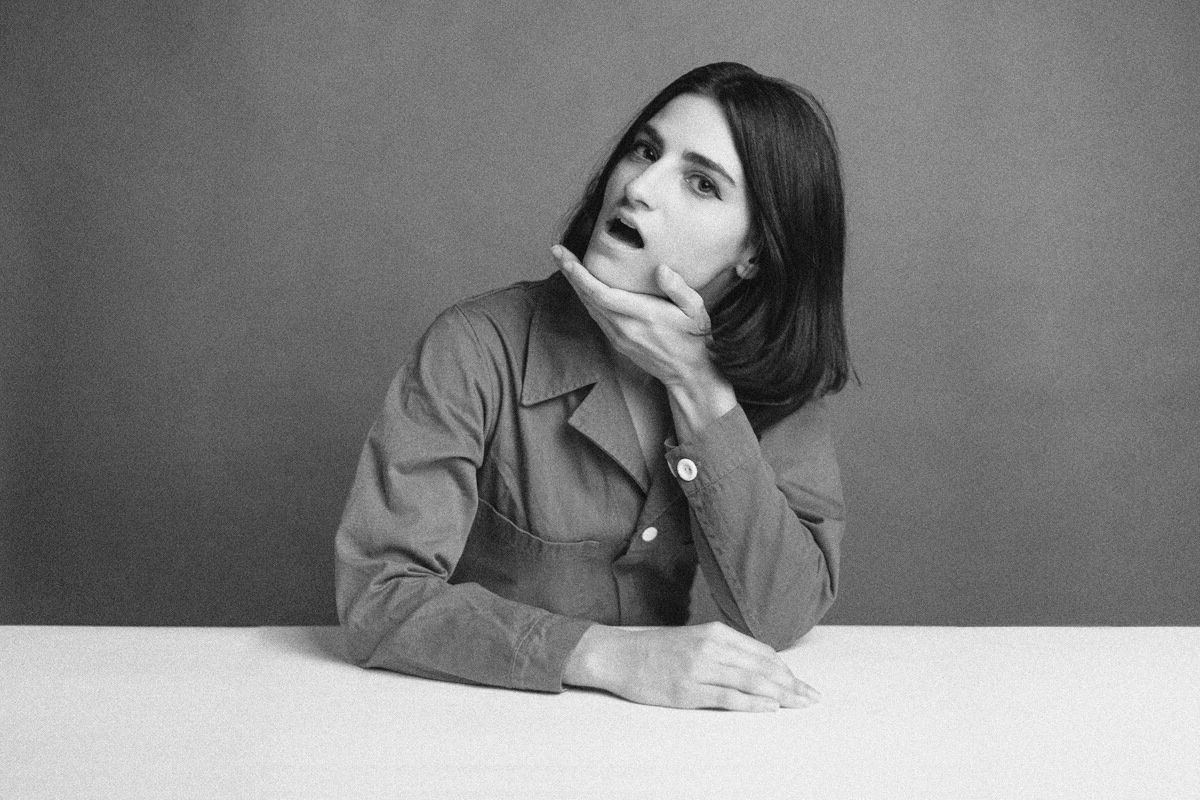 Mattiel is the whole package, but by no means does her brand feel packaged. Musically, the Atlanta artist blends '60s rock 'n' roll and a bit of jangle pop with a bit of blues and soul — at first listen, you might mistake her subtly dusty songs for previously unearthed vintage recordings. Aesthetically, she nods to the same era — yet is somehow forward-thinking, too.

In her videos, there's crisp color-blocking in sharp brights, plus striking (and sometimes dryly funny) oddball touches, like standing upright on a horse's back, or battling an onslaught tomatoes, cake, eggs, paint, feathers, flour, and other messy projectiles. The details are different for every clip, but the expertly cohesive presentation remains.

This comes courtesy of Mattiel's background: She works in design and visual communication for the tech company MailChimp, along with collaborators Jason Travis and, more recently, Troy Stains. (And as for the equestrian connection: She grew up on a farm, where she learned to ride around six or seven years old).

"[Troy and Jason] both have an extensive background in photography and filmmaking, and I have a background in set design [and] art direction, so we're able to get a lot accomplished together," Mattiel explains. "I also love editing the footage for the final cut, so we pass the footage around and work on it together. By now we all understand each other's process and fortunately have a similar sense of humor, composition, and visual messaging."

Mattiel's smooth transitioning of her own ideas to a group served her well in the creation of the album, too. The approach to writing and recording was fully old-school via Atlanta's InCrowd, a collective of session players helmed by songwriters Jonah Swilley and Randy Michael. Mattiel, of course, supplied the vocals, and also wrote the lyrics.

While Mattiel can certainly stand alone, when paired with these visually stunning videos, those compelling tunes are boosted to mind-blowing levels. To learn more about the creation process, we asked Mattiel for the rundown of each — here's her notes, starting with the earliest released.

"Whites of Their Eyes"

For "Whites of Their Eyes," we had a very small budget and only a month to plan everything out. We didn't have a crew - it was only Jason and I who worked on it - apart from the song being co-written by Jonah Swilley and produced by himself and Randy Michael. This video production was the first time I was able to work on my own product from an art director's standpoint.

I chose a bright red suit for the desert scenes, I rented a horse, bought fireworks, and planned several shots. Half of it was filmed in California, and the other half was filmed in Georgia. Jason has a great eye for cinematography so I leave that up to him. It was a lot of fun to make that video with a friend who understands my stylistic choices and takes my opinions seriously. Jason is immensely talented.

To make "Count Your Blessings," we had a lot less time for planning, so it was more hectic. Fortunately my boyfriend was able to be our production assistant and we had small cameo shots for Randy and Jonah. Our friend Skip also lent us his huge white warehouse space at his store Paris on Ponce in Atlanta. Our ideas were very quickly thrown together, but I liked this concept of beginning in a pure white environment and being covered in trash and liquid by the end. It begins with a giant 12-foot white backdrop (that I was somehow able to fit into Jonah's car after picking it up and hauling it from the other side of the city) and ends with me covered in smashed tomatoes, milk, soggy bread, and other gross things.

I think the very last shot with the cake is my favorite. I was also happy to wrap the video at that point. Milk goes sour very quickly under hot lights. It was actually a lot more disgusting than I anticipated. I'm also very bad at sports in general, so I can laugh at myself trying to play tennis with loaves of bread and tomatoes.

We recently finished "Bye Bye." It's the best example of what Troy, Jason and I can accomplish with almost no planning at all and very little budget. We had a few phone calls before the shoot, but most of it was resolved in the middle of the desert — on the spot. Our manager Kirby helped out a lot with logistics, too — water, food, transportation. Troy took on the role of DP/camera operator and Jason and I were also producing, directing, and ultimately edited the video footage for the final cut. I'm a bit of a control freak with the final edits, so I'm lucky that Jason puts up with me.

We shot it at El Mirage Lake north of LA, so it's a similar landscape as the first video. Fortunately, the California desert offers an incredible backdrop that doesn't cost anything. It's easy pickings. We spent a lot of the budget on renting our friend Daniel's Chrysler Fifth Avenue which looked great on this gigantic dry lake bed. Jonah and Randy also helped out a lot by just being themselves.

Then there's the little filler clips which are a grab bag of props and ideas. For the basketball/watermelon shot, I tediously stabbed the circumference of a watermelon with scissors (we didn't have a knife) so that it would break when I threw it down. I wasn't sure if it would actually work but it ended up being pretty seamless. Overall, we're having fun and trying to inject some clever humor into the videos so it doesn't ever get boring. Films should be made to keep the viewer's attention at all costs, even if they might not care for you or the music.