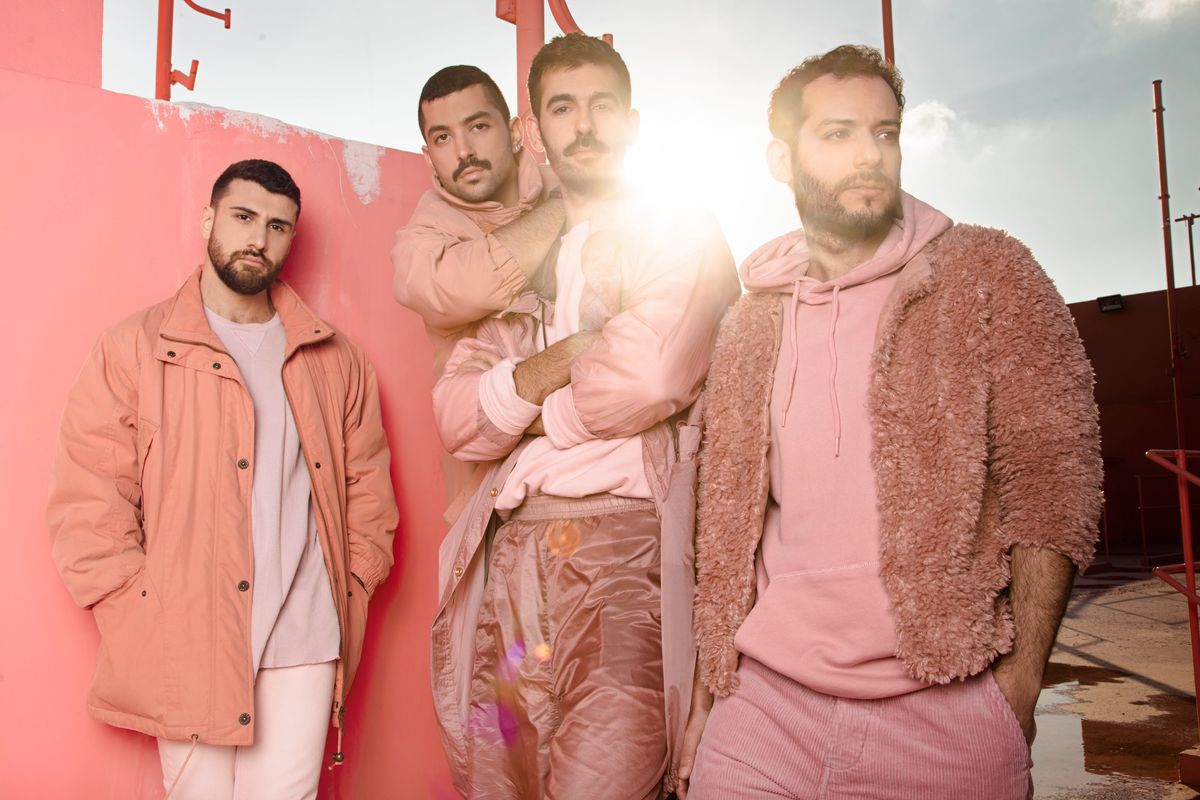 Members of the Beirut-based band Mashrou' Leila, fronted by lead singer Hamed Sinno, have been edging the status quo for quite some time now. Their self-titled debut, released in 2010, still stands strong as a norm-challenging statement on the indie-pop canon. Over 10 years after the band first met at the American University of Beirut, their music is still as liberating for queer Middle Eastern pop fans as ever, and to reflect, they've released a compilation record unlike any other: The Beirut School.

"We weren't in a very good place when we decided that we would give it another shot," Sinno tells me over the phone of the making of the record. He's in New York City to begin a new leg of Mashrou' Leila's tour and prepping for Damian Lazarus' Get Lost Live at the Knockdown Center, taking place Friday, October 11. "We started looking at everything we'd done over the last 10 years, and how we'd changed as musicians. What it is that brought us into it in the beginning, what we were affected by. We wanted a record to document that for no real good reason other than our own sentimental rubbish."

Describing The Beirut School as anything even close to rubbish is a disservice on a whole to the record, however sentimental it might be. Standouts from the band's discography, like "Taxi" and "Fasateen," appear as bookends to larger themes of love and power within the scope of the band's activism-centered stance in the pop world. Forever touchstones of the group's history, the songs are givens on a compilation record practically made for packed and empowered audiences swaying along to each kick and drum hit.

Several new tracks have made the cut for The Beirut School, too. "Cavalry" and "Radio Romance" are two firmly-planted pop monuments, influenced by years of Sinno and the group's sound evolution. "Calvary explicitly has a little bit of a song that we wrote after the incident in Egypt, as a direct reaction to that," Sinno says, referring to to arrests made as a result of fans raising Pride flags at one of the band's concerts. "At the same time, Radio Romance is very much a really chilled out, happy love song."

The songs exist on the compilation as appropriate contradictions within the larger Mashrou' Leila story. He recognizes this directly when speaking about activism. "Getting through [the last ten years], I am so grateful. In spite of all the hardship and in spite of all the nonsense, really absolute nonsense and bigotry, it's ridiculous. I'm so grateful, but that comes with a lot of pressure," Sinno says about the band's journey as a whole.

Mixing together the reflections, hardships, and critical success of the band into one record is a daunting task, but one that's provided a source of renewed energy for Sinno on this upcoming leg of the tour, especially ahead of the group's NYC performance. "We're trying out a couple of new songs," he tells me about the tour. "We haven't done that in a while. With the last releases, we'd record everything and then once it was ready we'd release it, then we'd start playing them live."

This time is different — with reflection has come refreshed viewpoints in the unreleased tracks, especially at the intersection of activism and joy. "One of them, sonically, is quite different to a lot of things we've done before. It's really happy and optimistic. At the time, I was reading something about joyful militancy as an optimistic approach to politics and how joy can be a wonderful political call for activists. I guess I was trying really hard to channel that into the lyrics and the writing. The sound is very different from my regular bleakness."

Mashrou' Leila will be performing at The Knockdown Center for Damian Lazarus' Get Lost Live on October 11, 2019. Get tickets here.