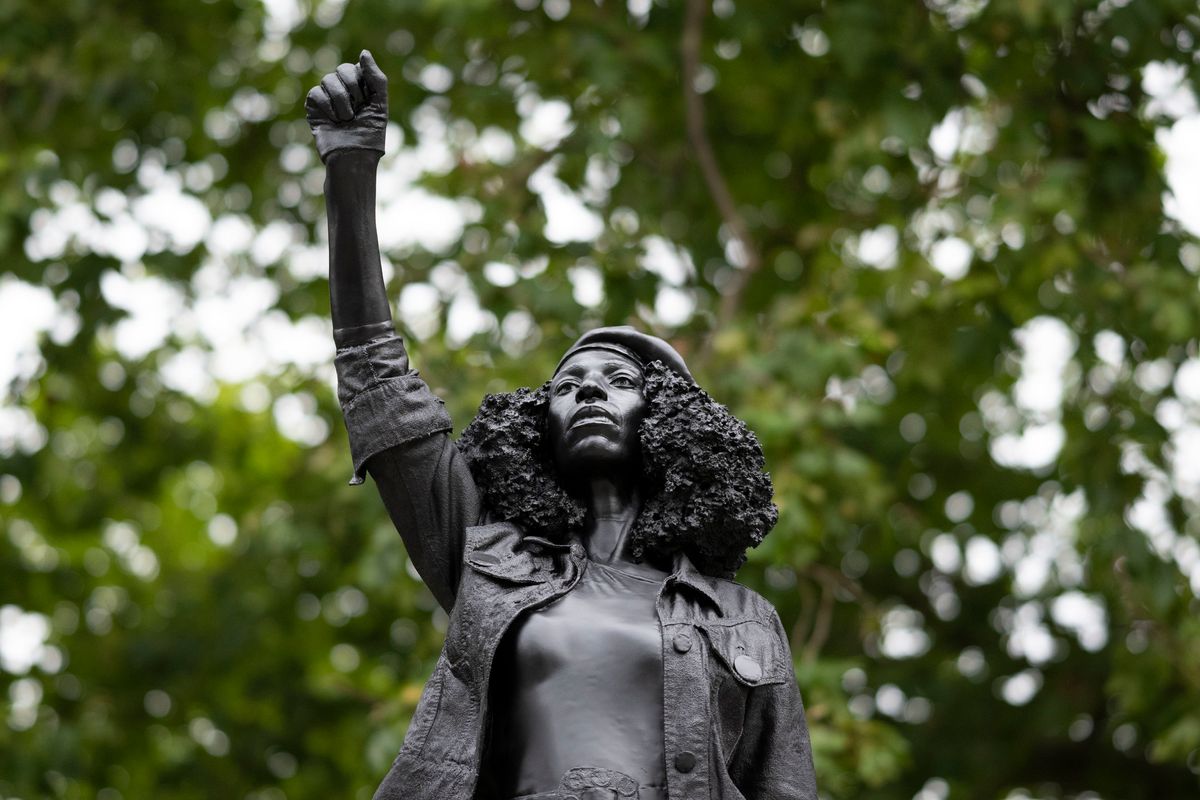 Installed under the cover of night, a new black resin and steel sculpture depicting Black Lives Matter protester Jen Reid appeared on the vacated plinth this morning in Bristol. The work of artist Marc Quinn, the piece entitled "A Surge of Power (Jen Reid) 2020" was inspired by an image he saw on Instagram that captured the local resident raising her fist in a Black Power salute after the Colston statue was torn down.

"My first, instant thought was how incredible it would be to make a sculpture of her, in that instant," Quinn said in a joint statement with Reid. "It is such a powerful image, of a moment I felt had to be materialized, forever. I contacted Jen via social media to discuss the idea of the sculpture and she told me she wanted to collaborate."

On the moment now immortalized through the sculpture Reid recounts, "Seeing the statue of Edward Colston being thrown into the river felt like a truly historical moment; huge. When I was stood there on the plinth, and raised my arm in a Black Power salute, it was totally spontaneous, I didn't even think about it. It was like an electrical charge of power was running through me. My immediate thoughts were for the enslaved people who died at the hands of Colston and to give them power. I wanted to give George Floyd power, I wanted to give power to Black people like me who have suffered injustices and inequality. A surge of power out to them all."

Quinn goes on to say that the unsanctioned work isn't intended as a permanent solution, but to keep the conversation about racism going, "it's a spark which we hope will help to bring continued attention to this vital and pressing issue. We want to keep highlighting the unacceptable problem of institutionalized and systemic racism that everyone has a duty to face up to. This sculpture had to happen in the public realm now: this is not a new issue, but it feels like there's been a global tipping point. It's time for direct action now."

Quinn doesn't know how long the sculpture will remain installed, but if the similarly clandestinely-installed Fearless Girl statue that popped up in front of Wall Street's iconic Charging Bull in 2017 and later relocated to sit in front of the New York Stock Exchange is any indication, "A Surge of Power (Jen Reid) 2020" might be here to stay.

UPDATE 7/16/20: In a tragic turn of events, barely 24 hours after it was installed, the sculpture of Jen Reid has since been removed by the Bristol City Council. In a statement put out by the mayor of Bristol, Marvin Rees, he explained the need for public consensus when determining the future of the vacated Colston plinth. "My relentless commitment is to build a city for all Bristolians, with all our differences. To this end, the future of the plinth and what is installed on it must be decided by the people of Bristol." The sculpture has apparently been taken to a local museum where the Quinn is welcome to reclaim it or donate it to the museum's collection.

The sculpture of Jen Reid, a black woman who took part in the Black Lives Matter protest in Bristol, is taken down… https://t.co/Y4n1bvsrC7
— Ben Birchall (@Ben Birchall)1594877640.0