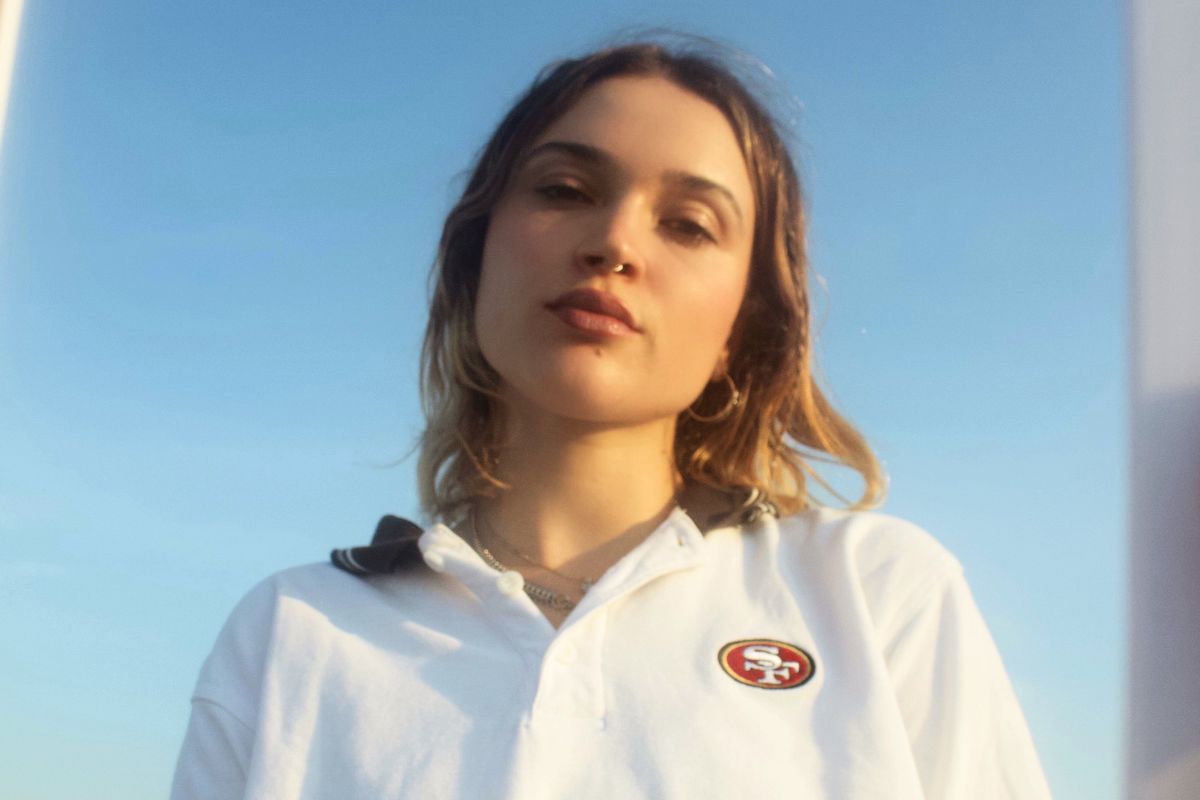 A conversation with Lolo Zouaï was supposed to take place in Brooklyn's Flatbush neighborhood at Park Side Creamery, Zouaï's favorite spot. We planned to chat in person about the lightning in a bottle success of her debut album (2019's High Highs to Low Lows), along with later wins like getting the legendary E-40 to assist on her "Chevy Impala" remix, and the release of her "Desert Rose" single, which featured breathtaking visuals in Morocco — a close neighbor to Zouaï's French-Algerian roots.

Over coffee, Zouaï would discuss her recently released Beautiful Lies EP that's more mellow and "moody" (as she puts it), and serves to sate her fans until she finishes her follow-up album. Instead, we were quarantined within the same city, talking over the phone as Zouaï packed a bag to jump on a flight to LA before a domestic travel ban ensued. This new global shift impacted her significantly, since her tour with Dua Lipa has been postponed. So she traveled in a face shield, a face mask and gloves to the West Coast, as being there under quarantine was far more productive for her in finishing her next project.

Related | Christine and the Queens Was Born to Rule

While out West, Zouaï worked almost like an independent artist again. A pandemic has a way of limiting resources, but she made it work with the Beautiful Lies release, even conducting the photoshoot in her temporary home out there. But the need to create in her own space was calling ("Brooklyn just has its way of making you want to work harder"), especially as she moved deeper into her sophomore album, scheduled for a 2021 release. So after three months away, she flew back home to NYC.

We caught up again during what felt like round two of this nonstop pandemic, and so much more happened. For one, the aforementioned Park Side Creamery shut down, but so did the entire country. As protests were formed and an overall awareness of racial disparities increased in the wake of holding police accountability for their brutality, Zouaï took her own action. She donated $5 toward every pre-sale of Beautiful Lies to The Loveland Foundation, an organization dedicated to offering free therapy sessions to Black women, both young and adult. She then launched a merch line, where a percentage of $30,000 in sales were donated to Black Lives Matter, The Loveland Foundation and the LGBTQ Freedom Fund.

Lolo Zouaï tells PAPER all about the road ahead, and while so much of her work is about making it, what happens when you've actually made it?

So all current events aside, life is pretty sweet right now for you...

Yeah, it is. This year, I think for everybody, is not going as planned. I can't really speak on the Dua Lipa tour because I don't know what's going on yet, but that was something that I was really looking forward to so much — just getting to tour my album for hundreds of thousands of people.

You seem to be thriving though, creatively.

Yeah, I am. I set up my home studio a few months ago, and so I've been working as much as possible at home and changing the way that I think. I have my producer Stelios — who I work with so closely — and I love him, but as I started touring a lot and just doing a bunch of shoots and press, there was less time for us to connect in the studio. At first, I was going to wait to work with him, and now I'm realizing I need to be creative on my own time and every idea I come up with is valuable in some way or another. Just because it might not be a final product, doesn't mean it's not helping me grow.

How did it feel getting E-40 on the remix to "Chevy Impala"?

It was so full circle! When I was 17, I went to this store in Berkeley and he was doing a signing of his album History: Function Music with Too $hort. I got my album signed and got my picture taken with them. I've just been the biggest E-40 fan forever, and then when I made "Chevy Impala," when I say "Bounce like a 6-4," I was impersonating E-40. So I was like, "Oh my god it would be incredible if I could just get E-40 on the song." My A&R was like, "I know E-40, let me link you guys. I'm sure he'd fuck with you." We started texting, and he sent the verse quick! The email said, "E-40 verse" [laughs]. So I said to him, "Thank you so much. This is such a dream come true." And he was like, "All gravity!" Too good. He's a legend!

What made you shift gears with Beautiful Lies?

I was in a dark mood and I was just making kind of sad, moody music. It's been hard for me to make fun music. I had been touring for a while and the album... it's just all so different now. I was trying to find that inspiration again, but it's been hard to make music and those were the songs that came out. So I was like, "Okay, I should probably put these out." Plus, the release was all during quarantine, the art was shot in that apartment. Everything was with less resources; I worked with different people and I produced the "Beautiful Lies (Cold)" song by myself. It was just a different approach to the music.

That's interesting, because you started with just you and your laptop in your apartment. Then you got signed and did all of the studio things, and now you kind of had to return to the bare bones of making your music. It was almost like a weird full circle moment.

Exactly. That's how it felt, but with more eyes on me and more people waiting for music which was a little different. I'm excited to get back into the studio and work on the second project, because I'm putting a lot more thought into it.

Where are you in the process of recording your next album?

I started a bunch of songs in 2018, even before I released High Highs to Low Lows. There are songs that I'm thinking about working on finishing. I'll be focused on the album all year long. There's gonna be some more upbeat songs. I don't know, I'm still working on it. When I first decided I was making this album, I was saying that I wanted it to be a more consistent feeling — like, an overall feeling. With my first one, there was a lot of highs and lows, but now I want to find a more balanced feeling. I want to think of exciting ways to use more drum sounds and really make it timeless. I'm not forcing myself to rush anything; there's just so much time to make a second project without putting pressure on myself. I just want to make better music — the best music I can make.

With High Highs to Low Lows, you were talking about the highs and lows of your life but also your career. At this point, where does your inspiration come from because prior to this moment, your music involved getting to the point that you're actually at now.

That's been probably the hardest part: finding my new narrative and realizing that now that it's not about a physical struggle, how do I still connect with the people that fell in love with the music because of that? Now I'm thinking a little bit deeper inward and talking about other things. In High Highs to Low Lows, I didn't really talk about love. Now, I'm tapping into a relationship I had. Why am I so afraid of relationships? Why am I the way that I am? Yeah, just going inward. I'm realizing that maybe I don't have to be struggling physically or financially or all that, but I'm always going to be struggling mentally. That's just who I am.

What was it like performing those older songs, though, that are about the past?

I'm still able to tap back into those feelings, because in my mind I'm still not where I want to be, career-wise. I still have so much building to do. So, it still feels very real. Songs like "Summers In Vegas" — that's about my dad — are never going to feel old because it's a story I'll always be able to tell.

So much of what happened in the world over the last few months inspired you to turn toward activism. Can you talk a bit about that?

So many people have been incredible, the protestors, everything. I was trying to think of any way I could use my platform. When you have a certain amount of followers and people listening, it's important to let them know where you stand and to let them know how you feel about certain issues. I just thought about what I could do — I know it's not that much. I made some personal donations, and then I donated all of the profits for my merch to the LGBTQ Freedom Fund and Black Lives Matter, the more localized groups of BLM. I just committed to donate all of the profits from that and then committed to every year in June, donating all of my merch sales toward different organizations. Like, I'll do my research every year on an organization that I think makes sense. I also donated $5 for every presale [of Beautiful Lies] to The Loveland Foundation. The Loveland Foundation provides free therapy for Black girls and women. Therapy is so expensive, and there's a majority of therapists that are white therapists and it's like you just wanna feel like you can relate to your therapist. I think mental health is so important and I struggle with it myself, so I was happy to raise money for that.

Your merch line sold out pretty quickly too. Were you a part of the creative direction for that?

Yeah! My designer, Amaya Segura, she is so cool. I put together a mood board, and I wanted this kawaii, Powerpuff Girls feel — just a really girly collection. I think it went really well with the cover art and the overall direction of the project. I always have a part in the direction, but I'm not physically drawing. Although, I did just start painting! I did my first painting and it's really nice, and I'm going to start painting more.

What did you paint?

I painted like a dice, cherries and then Lucky 7's. It's very colorful and cute. I've been really into this artist Misaki Kawai, and she uses these really bright colors, so she inspired me.

Does this new phase feel exciting or scary?

Some people are afraid of change, but I thrive off it. That's why I always cut my hair, dye my hair. Whenever I'm feeling in a funk, I'll grab some scissors and cut my hair shorter and then I'm like, "Ok, whew..."