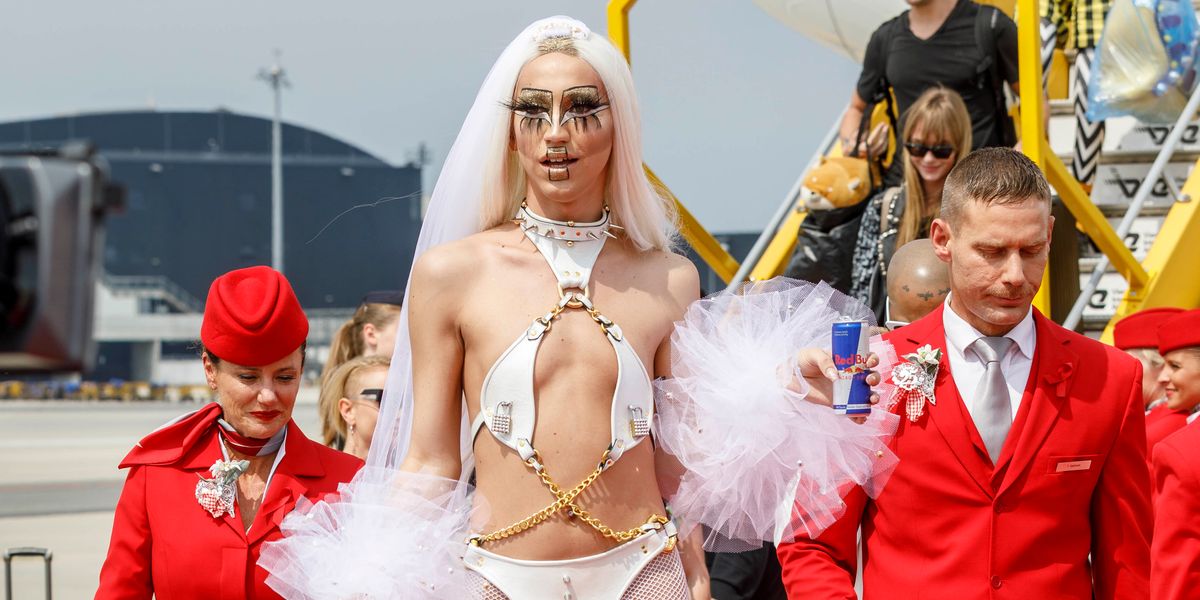 For club kids, the Life Ball plane is familiar territory, bringing the same energy of a party 36,000 feet in the air. The only difference is you need to first get through hours of commuting to JFK, waiting in line through security and stalling at the gate until your zone is finally called. Which is why a majority of this year's Life Ball guests embarked on the excursion to Vienna in proper airport clothes (leave Patti LaBelle who looked impossibly flawless and Yasmine Petty who most definitely sleeps in Moschino and thigh-high stilettos).

Linux, the nightlife star invited this year by Susanne Bartsch, was on board for all the debauchery, but you might not have realized it until she later stepped off the plane in her signature towering boots, geometric makeup and "G.U.Y." peroxide blonde wig. Wearing a more relatable day look, Linux spent the 8-hour flight downing free cocktails, scaling the aisles, climbing over seats and joining the impromptu dance party at the back of the plane where more drinks were handed out as we flew over the Atlantic, turbulence on and seat belt signs off.

By the time we landed in Salzburg for a brief red carpet appearance before our final stop in Vienna, Linux had already transformed into the otherworldly fixation we've come to expect at the coolest New York parties. While the majority of us were wildly hungover, already jet-lagged and wearing the same threads as when we arrived at JFK, she'd somehow turned a head-to-toe look — the first of three major looks that she'd serve throughout her Life Ball 2018 appearance.

PAPER caught up with Linux to break down the how and why of each iconic look.

Look One: Chastity Bride Off the Plane

"I've always made my own looks entirely myself, however this year I wanted to use Life Ball's platform to show the talents of some of my favorite queer NYC-based designers. Grisel Lopez owns a brand I love, @_Possessed, and makes fetishwear that I absolutely adore. I sent her some ideas and she made the gorgeous one-piece lambskin outfit I wore off the plane. I then paired it with tulle wristlets I stoned myself, 48 inches of white hair with a gold glitter root, a 7-foot veil, and of course my staple platform boots in gold. With about two full days of work, the look was completed. The most stressful part of the entire process, however, was definitely getting into full gig on the Life Ball plane after 6 hours of partying whilst flying over the Atlantic.

Throughout all my looks, I kept a common theme of gold. I wanted my off the plane look to portray a bride on her wedding day walking down the aisle, fully chastised with locks on her pussy and tits. He'll never buy the cow if he already gets the milk for free! Quite literally, I was walking down the aisle, the first Life Ball red carpet of the weekend. Like a chastised bride-to-be, I wasn't going to show all my cards at once — like how major is that.

As with the off-the-plane look, I wanted to put focus on another queer NY-based designer, Jamil Moreno. I pulled from their designs a mint tulle sleeveless jumpsuit. The legs actually go down to my feet, however, I wanted my iconic boots to remain shown to their fullest. I then created and stoned a headpiece in the shape of an 8th note.

The theme for this years Life Ball was The Sound of Music. In true Linux fashion, I took the theme literal. I imagined what I would wear whilst going to an orchestra — ballet-inspired tulle, 8th notes you would see on the sheets of music, still with accents of gold.

Everything in this look was made entirely by me. I created a structured dress from foam and cable-ties. I then covered that with gold lamé — I love lamé! On top of the lamé I attached a few layers of actual hay! Real hay! From the farm! I think it might have been illegal to take actual plants across the ocean into a different country, but what's done is done. I sprayed the hay gold and covered it in glitter to make it look less cheap. I then ran to Guitar Center on 14th street and bought the cheapest acoustic guitar I could find ($175!) and took a drill saw to it. I sawed off the back to make it less heavy and then sawed a hole through the middle to make room for my face to go through it. I sprayed the guitar gold glitter and then stoned it entirely by hand. I matched it with the same shoes and wig I wore off the plane.

Salzburg, Austria is where The Sound of Music takes place and is considered rural Eastern Europe. Since I was being flown in from the states, I wanted to bring what I felt was a representation of the rural West. I immediately began imagining cowboys playing their guitars in the wild Wild West, and when I combined those ideas with the glamour that is Life Ball, the outcome was brilliant.