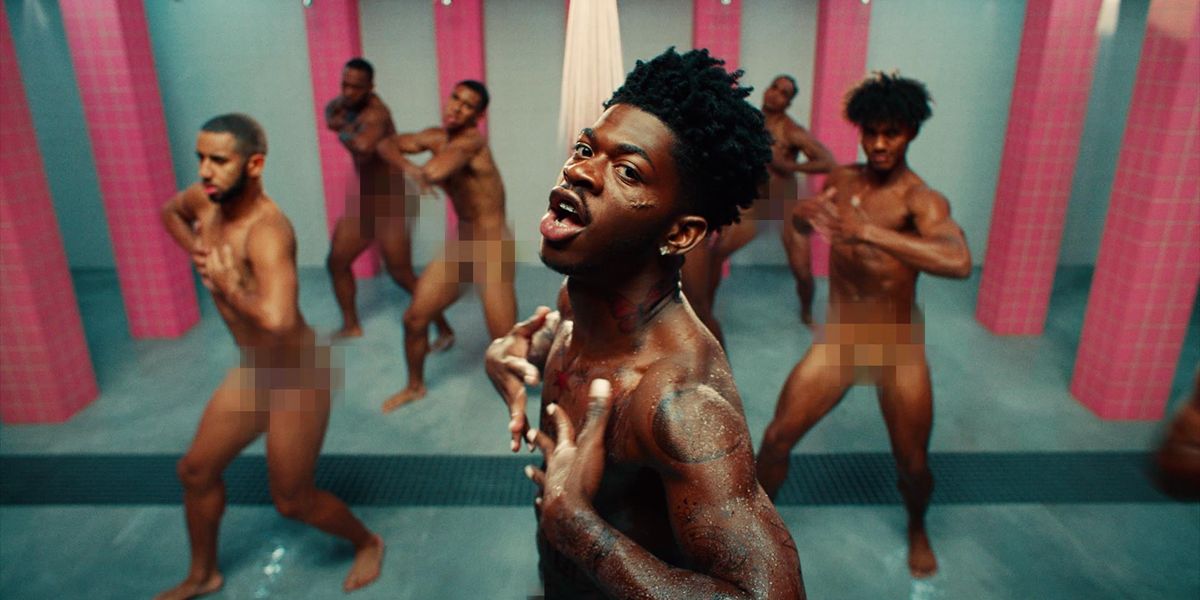 From being taken off the country charts to giving Satan a lap dance and getting sued over a pair of modified Air Max 97s, Lil Nas X has shown time and time again that he knows how to make the most out of an otherwise bad situation. Over the brief span of his career thus far, the openly gay chart topper has shown that he is no stranger to courting controversy but, in fact, thrives in it — and his latest single is a prime example of it.

First teased earlier this week with in a clip of Lil Nas X parodying the Nike case only to be sentenced to prison for being gay, "Industry Baby" has finally arrived and it's deliciously queer. Continuing the same narrative he previously set up, the music video for "Industry Baby" sees Lil Nas X head to "Montero State Prison" where he teams up with fellow inmate Jack Harlow to start a riot and bust themselves out.

The straightest Industry Baby" gets is through an appearance by Harlow, who we see fooling around with a female prison guard. However, he does end up getting the electric chair a short while after, so take from that what you will. There's also a cameo from Jason Momoa thrown in there for good measure.

Featuring some brassy production by Take A Daytrip and Kanye West, "Industry Baby" feels like a lyrical victory lap for Lil Nas X by throwing his achievements in the face of critics and being unapologetic about who he is.

"I wrote a song for us," Lil Nas X wrote in a public note to himself. "I know sometimes you feel like it's all downhill from here. I know your sexuality has made you feel like an outcast amongst your peers. I know going from having the biggest song in the world to being trapped in your apartment is weighing heavy on you. And I know if you hear the phrase 'one hit wonder' one more time you might combust. But I need you to keep going. I need you to realize that you have the opportunity to be the person that you needed growing up. I need you to stop feeling sorry for yourself. And I need you to remember that the only person who has to believe in YOU is YOU."

Beyond subverting clichés within "Industry Baby," Lil Nas X is also putting his money where his mouth. In partnership with The Bail Project, the rapper wants to fight mass incarceration and structural racism within the US criminal justice system by putting an end to cash bail.

In addition to making a donation himself, Lil Nas X has invited other artists and fans to contribute to the nonprofit organization as a part of the Bail X Fund. "I know the pain that incarceration brings to a family. And I know the disproportionate impact that cash bail has on Black Americans and the LGBTQ community," Lil Nas X said. "Let's bring people home & let's fight for freedom and equality."

Naturally, homophobes were clutching their pearls in horror about all the gay shit that had invaded their good, honest Christian feeds. Luckily, they're in the minority and have been ratio'd accordingly.