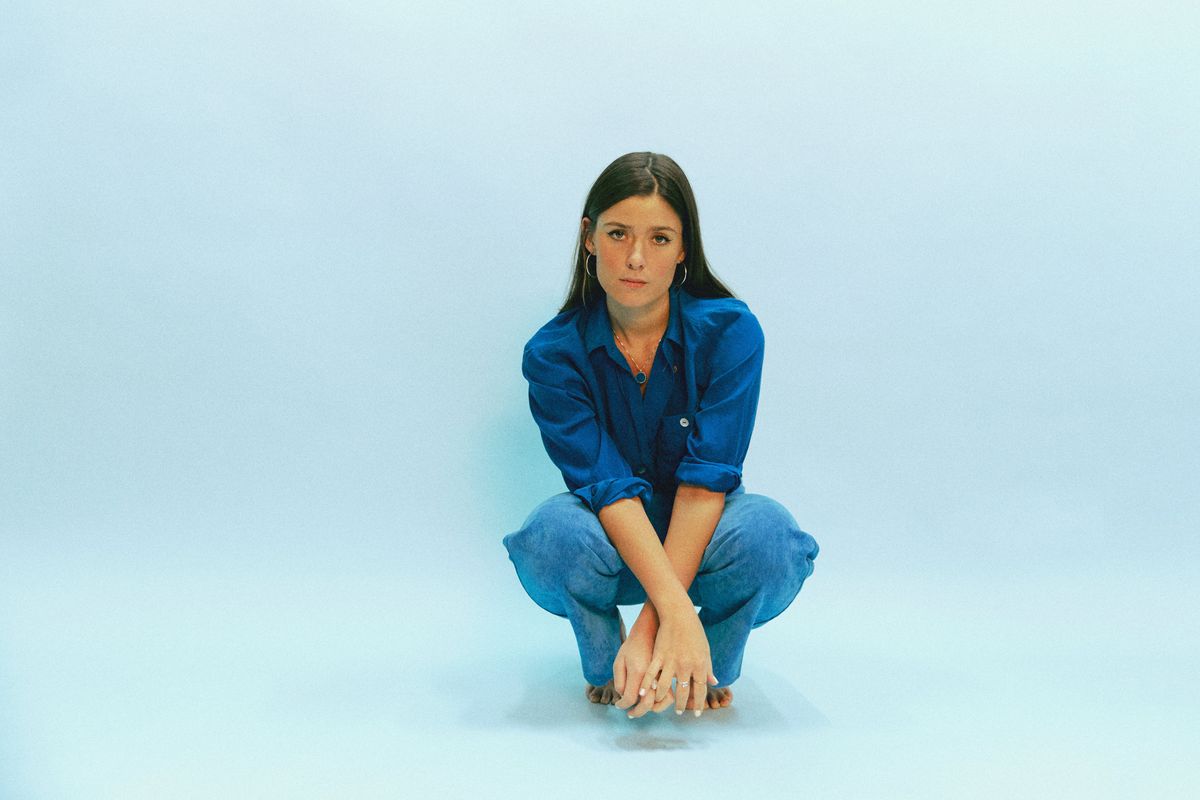 LÉON's sophomore album came about after a period of great change in her life, shortly before the pandemic rocked all of our worlds. So creating Apart, out today, was unlike any recording experience she'd had until then.

The singer-songwriter, born Lotta Lindgren, came home to her native Sweden at the end of 2019, after a year of touring her self-titled debut. As the adrenaline of constantly being surrounded by her bandmates and crowds of fans died down, Lindgren also had to deal with the end of a relationship, after splitting with her longterm boyfriend.

She rang in 2020 from Stockholm, living alone for the first time, and dealing with her grief and isolation. Then the pandemic hit. But Lindgren took this solitude in stride, and started writing as she did before she got involved in the music industry — entirely on her own.

Apart was completed in Stockholm from start to finish, with producer Martin Stilling, an old friend of Lindgren's. Together, they took the vulnerability of her songs and made them into a cinematic, new album. The impeccably placed string sections and stunning harmonies make for an all-consuming sonic experience. On Apart, Lindgren is the most vulnerable she's ever been, and it's a welcome evolution.

"I think it's just honest — very honest," LÉON says of the album. "All the songs were pretty emotional to make for me. It's very personal."

Below, LÉON talks to PAPER about the unique experience of creating an album in the midst of a pandemic, and how that resulted in a certain return to form in terms of her creation process, as well as the healing powers of making music. And be sure to stream Apart, here.

It seems like the beginning of the year, before you started recording the album, was a period of transition for you. How did you experience that time?

The beginning of this year was a strange beginning of the new year. I came home from a tour two days before Christmas. There were a lot of different emotions because I had been with my tour family for the majority of the year on a tour bus, and I had just gotten my first apartment on my own in the middle of all of that. I was also starting to think about what I wanted my next project to be. With all these different emotions, the year didn't start out on a high for me.

Would you say that making music was healing for you throughout all of that?

Definitely. One of the biggest comforts was that I got to make this new album with one of my best friends here in Stockholm. It was such a good thing for me to just go to the same place, his studio, everyday. And the studio's really close to my apartment. So working with someone that really knows me and what I'm going through was really nice.

How was the recording of this album different from your other projects?

It was really different. With the last album, a lot of the writing was done in LA and then I recorded a lot of it in London. I don't know what I would have done if we weren't in this situation. But I think it turned out pretty well, just being able to be in one studio all the time. It was a consistency that I hadn't had for a long time. The process for this album was similar to how I used to write before I got into the industry. I used to write a lot on my own. When I was teenager I had a band, and I would write songs on my own and then bring them to my band. But then I got used to writing with different people and producers. So this time around was me going back to how I used to work, so it was pretty relaxing in a way.

Did you do most of the writing before you got into the studio or did that happen at the same time as you were working on Apart?

It was both. A lot of these songs happened when I was just sitting at home in my kitchen. And then I would go to my producer's studio and we would work on it together and take it further. And then I have two songs from the album that I didn't write with him.

"The process for this album was similar to how I used to write before I got into the industry."

Throughout this entire process, was there any music that you were listening to that inspired you?

With this album, I really wanted big string sections and that was inspired by old songs from the '70s and '60s, like The Mamas and the Papas and Big Star. Big Star is one of my favorite bands. But it was more that I wanted the album to be a bit more organic, so I wanted it to have those big choirs and big strings.

I definitely heard that vintage influence. I was really impressed by the production of the album. Listening to it I just wanted to go running in a field or something.

That's awesome. I just got a big smile on my face. I'm going to tell my producer that. He worked his ass off, so he's going to be very happy to hear that.

Were you very involved in the production, or was it more of a partnership between you and the producer?

It was very much a partnership. But we kind of have the same language when it comes to music. He's young, but he's a big fan of doing things the old school way and he's such a nerd. I think we have the exact same taste in music and we are drawn to the same things, so it came pretty naturally for us to decide how things should sound. Once he figured out where I wanted to take this album, I wanted to give him a lot of space too, because I can get a bit controlling if I'm in the studio all the time with him. I'll just be right there behind him or beside him, suggesting things until he goes crazy. So we came up with a system, maybe halfway in the process where I would come there in the morning for a few hours and then I would leave him for a few hours and maybe come back in the evening. So he got a bit of space to play around, and then I'd come back and we'd play around together.

Would you say there was a song that was a bit more challenging to make?

"Chasing A Feeling" was so hard to produce. It was really hard to get it right because if there were too many drums or it was too electronic, it just ended up sounding very EDM. It was hard to find the balance, so it probably took the longest to finish. "Die For You" was easy, but it was also really hard to decide when it was finished.

Do you have a favorite track on Apart?

It always changes. I haven't dared to listen to the record now for a while. So I'd probably say "Seventeen," maybe? And maybe, "And It Breaks My Heart." But out of the songs that people haven't heard yet, "Seventeen" and "Falling Apart."

Let's talk about the opening track, "Head And Heart On Fire." It gave me shivers. What was the creation process like for that song?

That was actually a song I did from home. I recorded it on my phone and then I brought it to my producer and I played it for him on an electric guitar. I'm always so shy when it comes to lyrics, so I was like, "We can change them." But he was like, "No, I think they're good." Then we just recorded it really fast. So it was one of those rare moments where you just feel like it works from the beginning.

"All the songs were pretty emotional to make for me. It's very personal."

How would you describe the album as a whole in a few words?

I think it's just honest — very honest. All the songs were pretty emotional to make for me. It's very personal.

This is a strange time to be releasing an album, but what are you looking forward to after this album comes out?

I'm not really sure what to feel or expect to feel when I put out this album, because I'm so used to putting out the music and going into rehearsals and making a show come to life. And when you tour an album, you get to know the songs in a different way and experiment and explore and give the songs a new life. So I have no idea what to expect. I'm hoping that I can do some type of live thing and get creative in any way I can to give the songs an extra life, but I don't know. I'm probably just going to go into the studio and make a third album, to be honest. So maybe that's my coping mechanism, to just make an album.