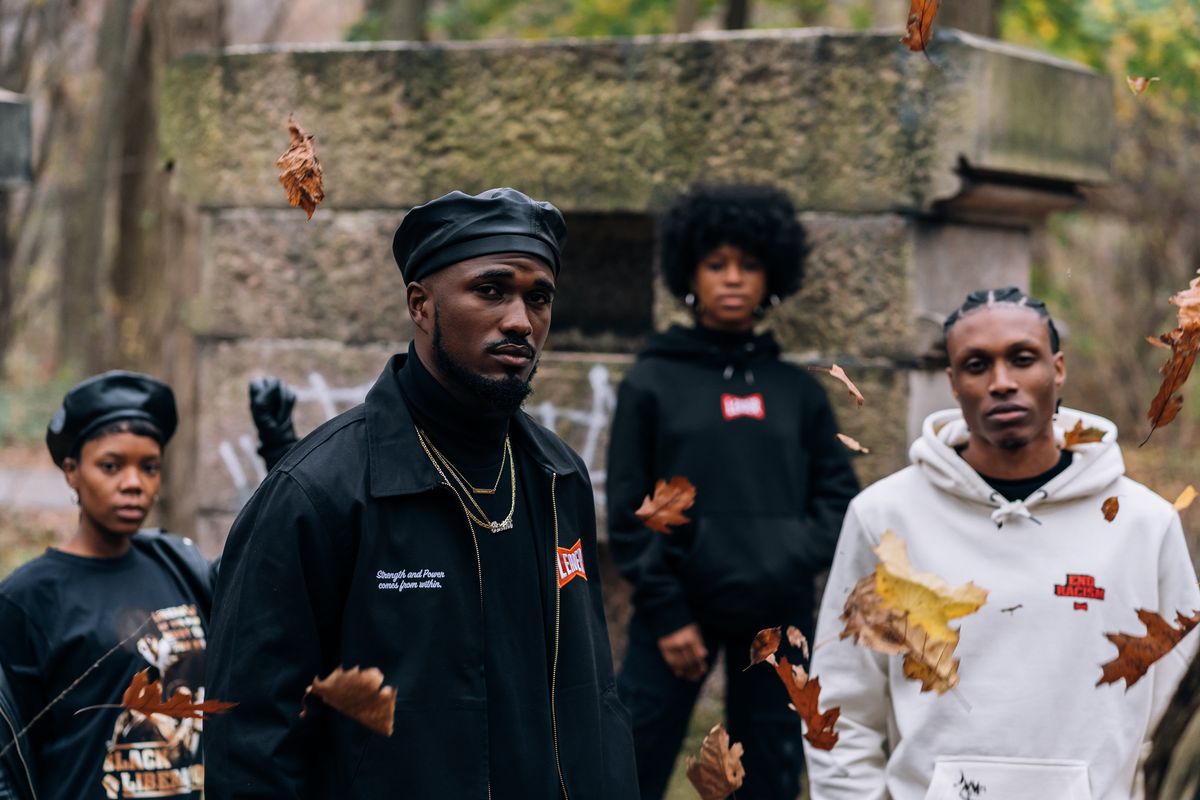 The weekend after Thanksgiving is filled with endless deals and discounts — but as great as those are, they're usually devoid of a deeper meaning. Enter "Liberation," Leader Quality's new capsule collection that drops at 10 AM EST this Black Friday.

The collection, inspired by the resilience of small business leaders during recent social justice movements, puts Black culture front and center. Composed of a T-shirt, hoodies and a jacket, the minimalist capsule is an homage to past civil rights leaders — and also aims to inspire current ones.

All the pieces contain references to the deep history of the civil rights movement. Priced from $45 — $165, "Liberation" achieves accessibility as well as standing for a just cause.

A work jacket is updated from a 1966 Black Power jacket, printed on the back with the movement's raised fist logo encircled by the words, "Black Power, Black Unity." A T-shirt is printed with profiles of legendary activists Malcolm X, Angela Davis, Assata Shakur and Stokeley Carmichael, featuring quotes from each on the back.

The line's two hoodies also spotlight civil rights; a cream model proclaims "We Must Be Leaders of Today," encircling a printed red, black and green Black Liberation flag (originally designed by Marcus Garvey in 1920), while a black style is printed with Leader's orange bow logo and the lettering, "Freedom and Justice."

Accompanying "Liberation" is a powerful short film of the same name, directed by Jamiersen Green, Finalis Valdez and Lavantae Johnson. The project, set to a soundtrack by Lecrae and Big Sean, represents Black oppression in modern-day society and how members of the Black community can overcome obstacles like political division, consumerism, police brutality and incarceration.

Throughout the film, which was shot on a former slave plantation, an all-Black cast highlights these values. A striking opening pan of the plantation's grounds shows the cast arranged in front of its gates. Brittany Winbush's neck is wrapped in an American flag. Brint Benson dons a bright orange prison uniform, his hands cuffed. Courtnie Henson wears an all-black outfit, surrounded by prayer candles. Jonathan Richetts wears a casual streetwear look, accented with gold necklaces and gold chains wrapped around his wrists like handcuffs.

The cast slowly frees themselves of their restraints; Winbush tears off her US flag, and Richetts and Benson's shackles are broken. After another camera pan, the group is dressed in the Leader Quality collection and ready to take on any challenges that come their way. They all run through the estate and towering woods, before emerging in a wide field. The film concludes with them joyfully waving their fists and a Black Liberation flag.

Over the course of two minutes, viewers aren't just introduced to the "Liberation" capsule — they're also shown core struggles that the Black community faces every day, and the optimism and excitement that emerges when they triumph. That's something that everyone can celebrate, especially when the collection drops this weekend.

You can now view "Liberation" on Leader Quality's YouTube and shop the collection on the brand's website.