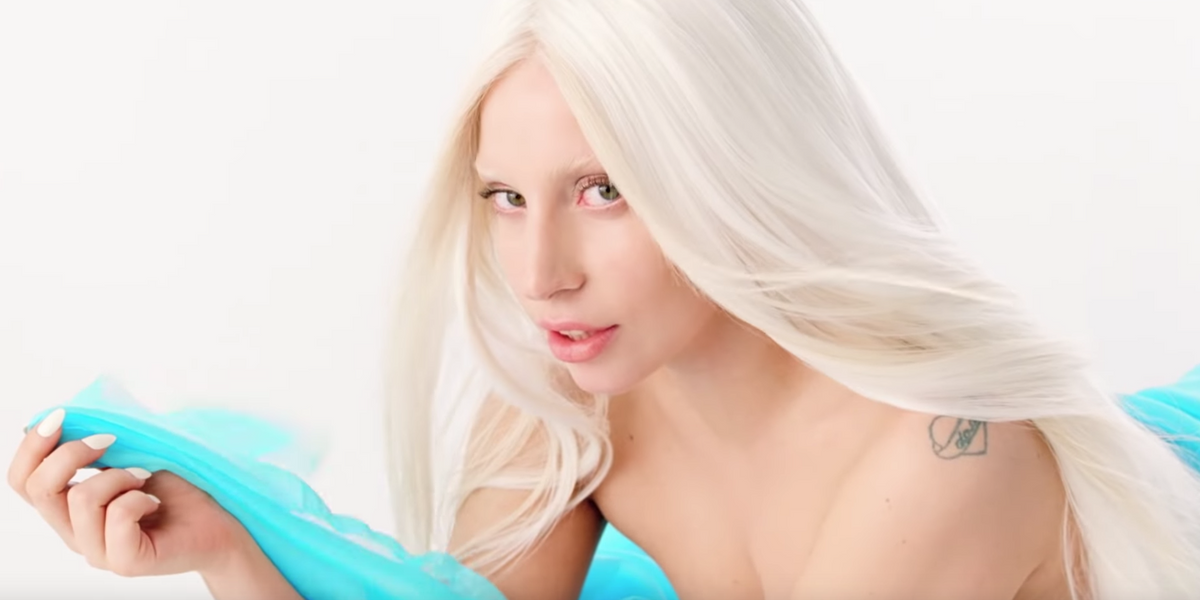 'G.U.Y.' Turns Five: When Gaga Rose From the Ashes

Five years ago, after a preternaturally long reign over the charts, Lady Gaga had arrived at a nadir.

Her ARTPOP campaign across 2013 and '14 had been plagued with problems, and her inner circle was fracturing. Gaga left bleak statements on her fan forum Little Monsters, such as: "Those who have betrayed me gravely mismanaged my time and health." By anyone else's standards, the album was still a chart success, but relative to her own career peaks, it was a deep, deep valley. Inevitably, the world "flop" pervaded headlines, as ARTPOP (nicknamed ARTFLOP) sales were reportedly 75% down on Born This Way.

Pop music is a notoriously fickle mistress, one whose acolytes thirst for blood and bangers in equal measure. As Gaga herself shrewdly foreshadowed in her unforgettably gory 2009 VMA performance, and more explicitly on 60 Minutes in 2011, people were awaiting her downfall: "That's what everyone wants to know, right? What's she gonna look like when she dies..."

Over three albums, Gaga shifted the pop paradigm to pivot on her example. Hers was an almost messianic arrival, defining pop forevermore as either pre- or post-Gaga. Her mastery of shocking visuals in "Bad Romance," "Telephone," and "Alejandro" was unparalleled — but in pop's consumption cycle, which trades in the dizzying rise and tabloid-fodder fall of artists, Gaga had soared too high for too long. Critics leapt on bald revelations about her professional turmoil to call long-awaited time on her reign. When the "G.U.Y" video (ultimately a lengthy feature incorporating multiple ARTPOP tracks at once) finally debuted this day five years ago, it was dismissed by some as a dumping ground for the residual visual material of a disastrous album cycle.

For fans, the lead-up to "G.U.Y.'s" release was saddening not so much because of falling chart figures, but because Gaga seemed so discontented. Throughout her albums, her lyrics had seemed often preoccupied with the idea of selling out or losing herself. "Poker Face" was about figuratively fucking money while dreaming of artistic freedom, "Love Game" hinted at the same Sophie's Choice ("Do you want love, or do you want fame?"), "Monster" was about a masculine figure who "ate her heart." She used a symbology of masculinity and femininity to represent the battle between commercialism and creativity. Gaga never alluded openly to this double meaning, but her later public revelations — about how she felt forced to compromise her vision to pander to money-hungry pop managers — confirmed these subtle references. In Netflix documentary Five Foot Two, she again lamented that dissonance: "What I've done is that when they wanted me to be sexy or they wanted me to be pop, I always fucking put some absurd spin on it that made me feel like I'm still in control"

In the bumpy lead up to "G.U.Y.," it seemed Gaga — after maintaining a seven-year balancing act of pushing the artistic envelope while remaining a viable commercial product — was finally losing the battle. The public, the media, her own close confidants, even some fans, had all turned on her. The video, fittingly, opened with her angelic figure broken-winged in the dirt, trampled by a horde of monkey-suited-men squabbling over money.

While some critics briefly scanned the video and dismissed what they had already pre-determined was a flop, fans lit up in delight after the first few seconds of screentime. The sense of excitement was palpable to us: Gaga was back.

"The easiest way I can describe this video for the fandom is: salvation", says Dovydas Laurinaitis, 22, a longtime fan from London. "It was her reclaiming control of her creativity. Its quality, concept and execution were what we had associated with Gaga, and it seemed like she was reshaping the era to what she wanted it to be. The fandom went crazy."

The video was a brilliant, postmodern, narrative epic. Gaga, arrow through heart, drags her near lifeless body from where it was abandoned by industry figures in the desert to Hearst Castle, where her beloved Haus of Gaga, her kindred creative spirits, await. They ritualistically carry and submerge her body in healing waters, before she's reborn as Venus, the Goddess of Love. She then greets Himeros, God of Sexual Desire. With gorgeous symbolism, Gaga represents the feminine (her art) finally meeting the masculine (commercialism) as equals — both deities. "Lay back," she told him (and us) commandingly, "and feast as this audio guides you through new and exciting positions." While in previous songs, Gaga seemed to search desperately for some way to make art and pop commune without destroying her, here she has already found the answer.

As the video rolls on, a regenerated Gaga mounts a counter-assault on the forces of capitalism, lays siege to the headquarters to the music industry and replaces its figureheads with the true creatives of her own Haus. Her art is reclaimed.

The lyrics are ostensibly about fucking, and Gaga trades in a conventionally sexy aesthetic in the video. As one critic wrote in a piece called Drowning, Not Waving: The Slow and Bitter End of Lady Gaga's Career: "... no one has ever wanted or even asked Gaga to be properly sexy." What they ignored was that these visuals perfectly complemented the personal victory the film represented for Gaga — it was about her enjoying feeling sexy, without having to put "some absurd spin on it" to feel in charge. It was an allegory about marrying the sex with the love, i.e. the pop with the art, and it represented a glorious culmination of a four album-long personal journey for her: "I'm gonna wear the tie with the power to leave you, I'm aiming for full control."

The video was so multi-level in its meanings that every tier of fan was satisfied. The hardcore, hawk-eyed fans were teary-eyed at her personal triumph, the surface-level skimmers enjoyed what was a well-crafted and wry pop banger, while the gay fans were gleeful at what they dubbed a power-bottoming anthem: note the winking double entendre of "I don't need to be on top to know I'm worth it." Gaga's mastery of language and metaphor was at its most potent.

Otamere Guobadia, 24, a fan from London, tells me how textually rich the song and video are. "G.U.Y is her magnum opus," he gushes. "Lyrically it's impossibly brilliant. She's at her most playful and daring with language. It's so literal (obviously about fucking) and simultaneously all so figurative, so fucking camp but so brilliantly self-aware."

Gaga takes side-quests into so many other mythologies it's hard to keep up — she features the Real Housewives as a heavenly band, Andy Cohen appears as Zeus. "It interlinks with Donatella's mythos too because Gaga is effectively playing a version of her taken to its most absurd conclusion." Gaga strives to make high and low art, godliness and reality TV convene within the space of the video, proudly defying critics and standing over the empire she has created. This art is not lesser because it is pop, she seems to say.

Tying all this together is the thread that runs through the whole video, this notion of the categorical insecurity of the masculine and feminine, or bad vs. good art: "I wanna be the Girl Under You, wanna be your G.U.Y.", she de-stabilises. Ultimately, this was the aim of the project that was ARTPOP, the ability to make peace between two warring factions — commercialism and creativity — by finding their common ground. In perhaps the best summary I've heard of the song, Otamere concludes: "It's about usurping, about gaining control by giving up control."

The single "flopped," and the general public concluded Gaga was over. Fans meanwhile, knew that the single was Gaga's manifesto for the future — a proud end to one seven year-long journey, and the beginning of a new, brave direction. Gaga stayed true to "G.U.Y.'s" statement of intent — "I don't need to be on top to know I'm worth it" — and she went on to make her jazz album, then her country album, and finally pursued her dream of acting. Gaga has now come full circle after more than 10 years in the spotlight — post-A Star Is Born, she is once again universally revered, and lauded for her polymathic achievement. Her confidence to pursue passion projects stemmed from that newfound sense of control over both her personhood and the products she sold — her story is incomplete without acknowledging that "G.U.Y." was the fire from which her phoenix flew.

The video stands as a testimony to the secrets only fans can know — to the sometimes gaping chasm between public perception and the personal journey of an artist. While it may sit in the hall of records as Gaga's biggest failure, to fans it remains a monument to the brilliance, resilience and vision of this pop behemoth.