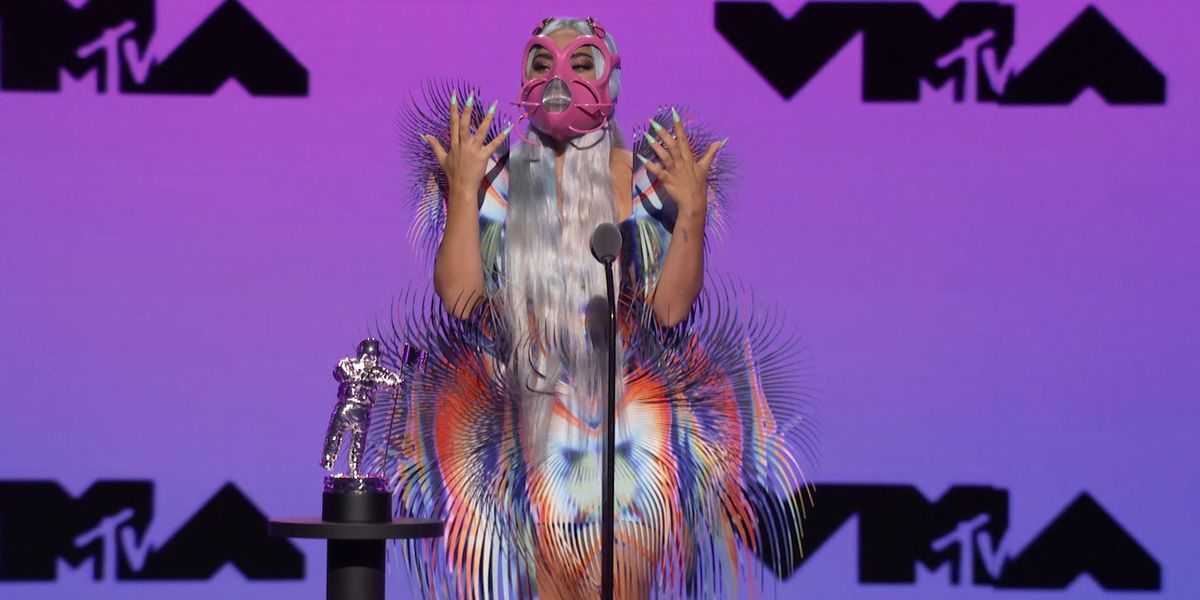 Update 9/17: Lady Gaga has announced that she'll release a short film for Chromatica's "911" on Friday, September 18 at 9 AM PST. In the teaser, below, the pop star shields her entire face with a blood red face mask and sports faded teal hair.

When Lady Gaga performed a medley of songs from her latest studio album Chromatica at the 2020 MTV Video Music Awards, she sang some of "911" with backup dancers around her, wearing an electric green two-piece bodysuit and a face mask.

Since there's no video out for the song, which appears as the eighth track on Chromatica, this brief show was the world's best depiction of the wondrously creative world that Gaga would make if she released an accompanying visual for it.

It looks like we won't have to wait much longer to see what she'd really create, since the singer has revealed to Billboard that she's filmed an official "911" video.

In Gaga's new cover story for Billboard's 2021 Grammy Preview, the singer revealed that she felt alive making it, "Maybe more than at any other point during the making of Chromatica."

She didn't give too many details about what the video will be about, but she did elaborate on the song's important meaning — about antipsychotic medication — and its difference from other pop songs that don't have much to say. "I mean, that's poetry!" she says. "That's not, like, 'I'm in the club, there's lots of bottles/ I'll have another, then bring the models.'"

She also explained that she hasn't started planning for the Chromatica Ball — the massive album-supporting tour that's been rescheduled for 2021 — for good reason. "I'm going to learn so much from now until the day somebody tells me you can effectively social distance at a stadium," she says.

"When that day comes, I'm going to build a show that's tailor-made with kindness," she continues. "I've been through enough to tell you that even though we can't go onstage now, I know we will. It's painful, and it's hard and scary, but I promise we won't be six feet apart forever."

Gaga has since seemingly teased the "911" video on Instagram, with what appears to be a behind-the-scenes photo and the police car light emoji.